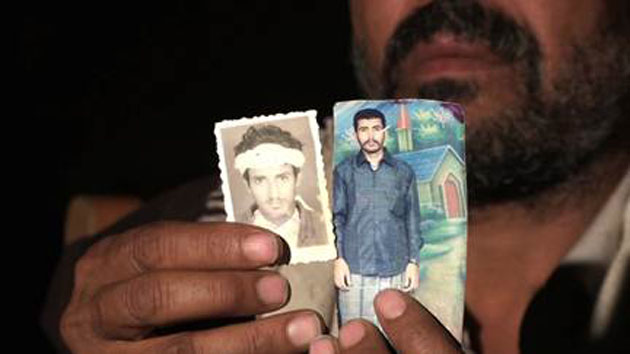 Saleh Mohsen al-'Amri of Yakla shows photos of a nephew and cousin who were killed in a December 2013 drone strike in Yemen. <a href="http://www.hrw.org/node/123244/section/8">Human Rights Watch</a>

A new report from Human Rights Watch outlines conflicting accounts surrounding a drone strike on a Yemeni wedding convoy that killed 12 people and injured at least 15 others.

While the US government has not officially acknowledged any role in the December 12, 2013 attack, anonymous officials later told the AP that the operation targeted Shawqi Ali Ahmad al-Badani, an Al Qaeda leader, and maintained that the dead were militants.

But after interviewing witnesses and relatives of the dead and wounded, Human Rights Watch determined that the 11 cars were in a wedding procession. Although the organization concedes the convoy may have included members of Al Qaeda, the report concluded that there is evidence suggesting “that some, if not all those killed and wounded were civilians.”

The report, titled “A Wedding That Became a Funeral,” has renewed calls for the Obama administration to carry out a transparent, impartial investigation into the incident—and to explain how such a strike is consistent with both international laws of war and Obama’s own rules governing drone strikes. Announced last May, the procedures limit the use of drones to targeting those who pose a continuing, imminent threat to the United States, where capture is not feasible, and there is a “near certainty” of no civilian casualties.

The report suggests the strike may have violated the laws of war by “failing to discriminate between combatants and civilians, or by causing civilian loss disproportionate to the expected military advantage.”