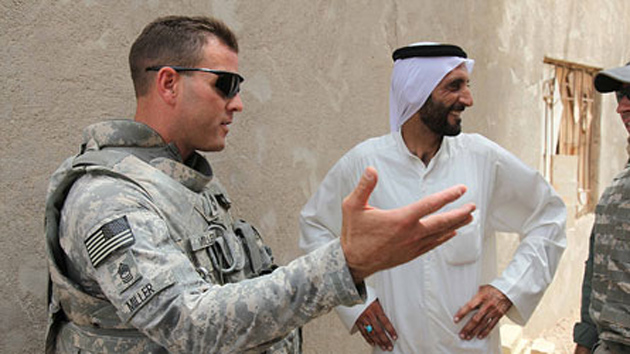 Minnesota Republican congressional candidate Aaron Miller’s gripe with Washington is personal. Speaking at the district convention on Saturday, Miller, an Iraq War vet who won the nomination to challenge four-term Democratic Rep. Tim Walz, explained that he was running for office in part to ensure that his daughter won’t have to learn about evolution at her local public school. Per the Mankato Free Press:

He also called for more religious freedoms. He repeated his story about his daughter returning home from school because evolution was being taught in her class. He said the teacher admitted to not believing in the scientific theory to his daughter but told her that the government forced him to teach the lesson.

“We should decide what is taught in our schools, not Washington D.C.,” Miller said.

Miller has declined to provide any more information to verify his story.

This isn’t the first time Miller has recounted this tale—it’s a staple of his stump speech. The comments were first flagged by Minnesota blogger Sally Jo Sorensen, who points out that Minnesota’s biology standards are set by Minnesota, not DC. Miller has the endorsement of the district’s 2012 GOP nominee Allen Quist, a longtime conservative activist in the state who wrote an educational curriculum supplement postulating that “people and stegosaurs were living at the same time.”

The first district, which President Obama carried by a point in 2012, is one of just a handful of red-leaning congressional districts represented by Democrats. But Walz, who has been endorsed by the National Rifle Association, remains popular in the district. It probably doesn’t hurt that the local GOP keeps nominating candidates like Quist and Miller, either.