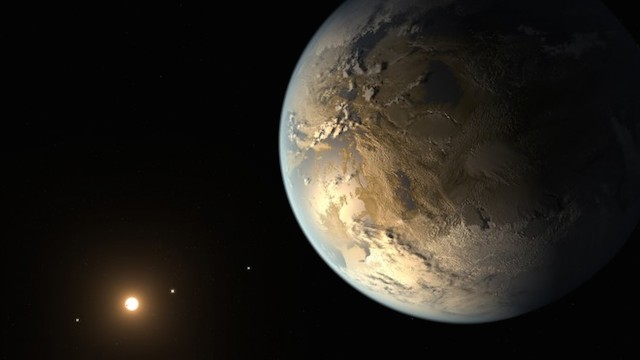 NASA just announced that astronomers have discovered the most Earth-like planet yet. Kepler-186f is the first Goldilocks planet—not too hot for water, not too cold for water—ever identified that is roughly the same size as Earth. (It’s a bit larger.)

So, is there life on that planet? It hasn’t been disqualified yet. So, maybe! But probably not. But maybe! But almost certainly not. But maybe! And even if there’s not its mere existence means there are very likely more planets like it out there, meaning Earth is maybe not necessarily unique, meaning life is maybe not necessarily unique to Earth. But basically, we don’t know much about this new planet. Take it away, WIRED:

[S]cientists have fairly little information about this new exoplanet, including its mass and composition. From what they can tell, the place is similar to our own world, though not quite Earth’s twin.

“We consider it more of an Earth cousin,” said astronomer Elisa Quintana of NASA’s Ames Research Center, lead author of a paper about the finding appearing today in Science. “It’s got the same size and characteristics, but a very different parent star.”

The planet is about 500 light years away, so it’s close, but not that close. This is all fun and exciting, but here’s the annoying bit: It was discovered by the Kepler space telescope which means we’re in for a cliffhanger:

Though Kepler is out of commission and won’t be able to provide any more information about this newest exoplanet, future telescopes could give us new insight. NASA is planning to launch the Transiting Exoplanet Survey Satellite (TESS) in 2017, which will watch bright nearby stars, including M dwarfs, for more exoplanets and be able to determine their masses. Follow up observations with the agency’s James Webb Space Telescope, currently slated to launch in 2018, could even look at the atmospheres of these worlds, providing definitive proof that they have chemicals like oxygen and water on their surfaces.