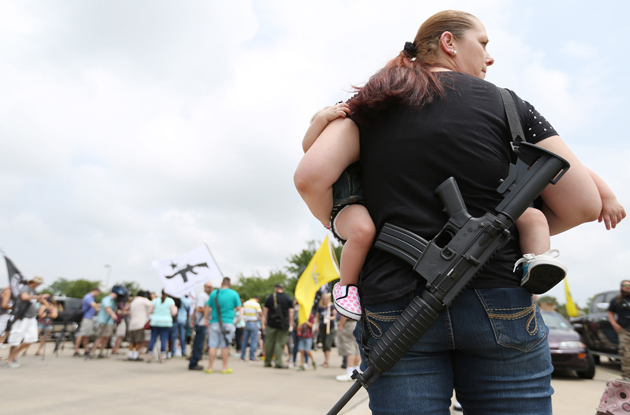 A woman with her 10-month-old twins outside a Home Depot in Texas on Saturday. Andy Jacobsohn/Courtesy Dallas Morning News

The last couple of months have been rough for proponents of open-carry gun laws. No fewer than seven restaurant chains have taken a stand against firearms being brought to their businesses, after activists in Texas conducted provocative demonstrations in which they toted semi-automatic rifles into various eateries. Texas law allows rifles (though not handguns) to be carried on display in public, but some patrons and employees were unnerved and angered by the demonstrations, and a national group advocating for reforms, Moms Demand Action for Gun Sense in America, pressured the companies using social-media campaigns. After Mother Jones published videos of the gun activists in action, Sonic and Chili’s Grill & Bar became the latest to officially reject guns on their premises.

There has also been a particularly dark side to the story of the gun activists: As I first reported in mid May, members of Open Carry Texas and their allies have used vicious tactics against people who disagree with them, including bullying and degrading women. Just last week they harassed a Marine veteran, pursuing him through the streets of Fort Worth on Memorial Day.

In an extraordinary statement, the NRA denounced the open-carry demonstrations as “foolishness” and “downright weird.”

Evidently the National Rifle Association has come to realize that none of this is good for business. In an extraordinary move on Friday, the NRA’s Institute for Legislative Action—the organization’s powerful lobbying arm in Washington—issued a lengthy statement seeking to distinguish between “responsible behavior” and “legal mandates.” It told the Texas gun activists in no uncertain terms to stand down. [Also see update below.]

“As gun owners, whether or not our decisions are dictated by the law, we are still accountable for them,” the statement began. “If we exercise poor judgment, our decisions will have consequences…such as turning an undecided voter into an antigun voter because of causing that person fear or offense.” The NRA praised the “robust gun culture” of Texas—a state that has loosened laws as aggressively as any recently—but then laid into those Texans “who have crossed the line from enthusiasm to downright foolishness.”

Recently, demonstrators have been showing up in various public places, including coffee shops and fast food restaurants, openly toting a variety of tactical long guns. Unlicensed open carry of handguns is legal in about half the U.S. states, and it is relatively common and uncontroversial in some places.

Yet while unlicensed open carry of long guns is also typically legal in most places, it is a rare sight to see someone sidle up next to you in line for lunch with a 7.62 rifle slung across his chest, much less a whole gaggle of folks descending on the same public venue with similar arms.

Let’s not mince words, not only is it rare, it’s downright weird and certainly not a practical way to go normally about your business while being prepared to defend yourself. To those who are not acquainted with the dubious practice of using public displays of firearms as a means to draw attention to oneself or one’s cause, it can be downright scary. It makes folks who might normally be perfectly open-minded about firearms feel uncomfortable and question the motives of pro-gun advocates.

The problem has been on the NRA’s radar at least since April. In a roundtable discussion hosted by a Texas podcaster on April 28, Charles Cotton, a long-serving member of the NRA board of directors based in Houston, and Alice Tripp, lobbyist and legislative director for the Texas State Rifle Association (TSRA), squared off with CJ Grisham, the founder and president of Open Carry Texas. Cotton and Tripp, who have both been deeply involved in passing pro-gun laws in Texas for many years, warned Grisham that his group’s demonstrations were causing them major grief with their allies in the capitol.

“We do control a massive number of votes,” Cotton pointed out.

“I’m in the capitol three times a week,” Tripp added. “Every [lawmaker’s] office I went into today asked me, ‘Can’t you do something to stop the rifle demonstrations?'” One lawmaker told Tripp that he’d gotten a phone call from the Republican mayor of Arlington—the site of several provocative open-carry incidents—who’d been “absolutely incensed.” The demonstrations were seriously harming the overall mission to ease gun laws further, she said.

“The New Black Panthers did exactly what you folks are doing,” the NRA board member said.

Grisham, whose group sees its demonstrations as a means to legalizing the open carrying of handguns in Texas, was having none of it. “I would like to vehemently disagree,” he said. He went off about “the two major foes” of his organization, the “ultraliberal gun control bullies” of Moms Demand Action—and gun rights defenders who don’t go far enough. “When you’ve got the TSRA and the NRA basically coming down on us for standing up for our rights, that’s where our problem is,” he said. “Because now you guys are siding with Moms Demand Action.”

“CJ, when you make a statement like, ‘We align ourselves with Moms Who Demand Action,’ or whatever the hell their name is, those are fighting words,” Cotton replied with growing exasperation. “You alienate the people that can get this done.”

He continued: “The New Black Panthers did exactly what you folks are doing. They marched on the convention center during the Republican convention here in Houston [with] their rifles and shotguns…No arrests were made, but the legislative response was, ‘We’re going to stop this.'” State law was watered down in the next session as a result, Cotton said, freeing local governments to ban the possession of firearms under some circumstances.

“They might not like our methods, but our methods are working,” Grisham told me in a recent conversation with regard to the NRA’s pushback. “We’re out there educating people on the street. We’re showing them firsthand that you can see a gun out on the street or at a restaurant and it’s not going to shoot you. I’m not going to let Open Carry Texas be beholden to anyone that doesn’t get our mission.”

Some corporations are growing nervous and moving proactively to prevent gun activists from putting their brands in the crosshairs.

For the NRA, furthering its agenda in state capitols may not be the biggest concern at this point. In light of the recent corporate backlash, Slate‘s Dahlia Lithwick proposed late last week that the war over gun policy may now be fought more in the crucible of the free market. The battleground has grown to include retailers: An open-carry rally at a Home Depot in suburban Fort Worth on Saturday drew roughly 150 armed citizens as well as some withering criticism, according to the Dallas Morning News. Home Depot, whose owner is deeply conservative, signaled that it was fine with the demonstration.

But other corporations are growing nervous and moving proactively to prevent gun activists from putting their brands in the crosshairs, says Shannon Watts, the founder of Moms Demand Action. A large restaurant chain and a major retailer, she told me, “have reached out to us to discuss what policies they could put in place to keep gun extremists out of their businesses.” (She asked that the two companies not be identified due to the sensitivity of the discussions.) “Gun extremists believe that when a company is silent they tacitly support open carry, which clearly isn’t the case.”

It may be that a broader cultural shift—or at least a strategic one—is stirring within the gun lobby. In its statement on Friday, the NRA also cracked open the door to so-called “smart guns,” which aim to improve safety through innovative technological features. Historically the NRA has vigorously opposed them as yet another catalyst for dubious government overreach, but now says: “In principle, the idea would seem to have merit, at least in some circumstances.” That pivot comes not long after a businesswoman in California and a gun dealer in Maryland spoke out about harassment and death threats for trying to sell the cutting-edge weapons.

The NRA has also backtracked recently from its long-held stance against laws meant to disarm domestic abusers—a major factor in gun violence against women—by quietly supporting recent such legislation in states including Wisconsin and Minnesota.

The NRA’s ability to wield outsize political control may now be starting to change, too—at least with some of the hardcore base to which it has long catered. On Sunday, Open Carry Texas dismissed the criticism of its tactics: “The NRA has lost its relevance and sided with the gun control extremists and their lapdog media,” the group tweeted, adding, “We don’t fight for rights at the discretion of the NRA.”

Update June 3, 2014, 7:15pmEDT: The NRA is now beating a retreat from its condemnation of the Texas activists. Timothy Johnson of Media Matters for America reports that the NRA’s top lobbyist Chris Cox appeared on a NRA radio show on Tuesday to apologize for and repudiate the NRA’s lenghty post criticizing the open carry movement: “Cox said that the statement was ‘a mistake’ and that ‘it shouldn’t have happened,’ adding ‘our job is not to criticize the lawful behavior of fellow gun owners.’ Cox also blamed the statement on a ‘staffer’ who Cox said ‘expressed his personal opinion.'”

That’s an intriguing explanation given that the piece appearing on the NRA-ILA’s “News & Issues” page was 1,500 words long, contained links to an array of research, and had no byline on it. Eric Lach at Talking Points Memo has more on the Texas activists’ angry response to the NRA’s Friday post, which apparently prompted the organization to rethink things.

On the radio broadcast Cox went on to emphasize what he said was his organization’s official policy: “The National Rifle Association unapologetically and unflinchingly supports the right of self-defense and what that means is that our members and our supporters have a right to carry a firearm in any place they have a legal right to be. If that means open carry, we support open carry.”

Update June 4, 2014, 12:30amEDT: The Texas activists welcomed the NRA’s about-face: “Open Carry Texas would like to both thank and applaud Chris Cox and the National Rifle Association for clarification on their stance of open carry,” the group said in a post on Facebook. “We remain confident that the NRA will aid with legislative support to help in getting an open carry bill [for handguns] both drafted and passed in the 2015 legislative session.” Said one commenter: “So, folks aren’t recommending they cut up their NRA cards and mail them in anymore?”