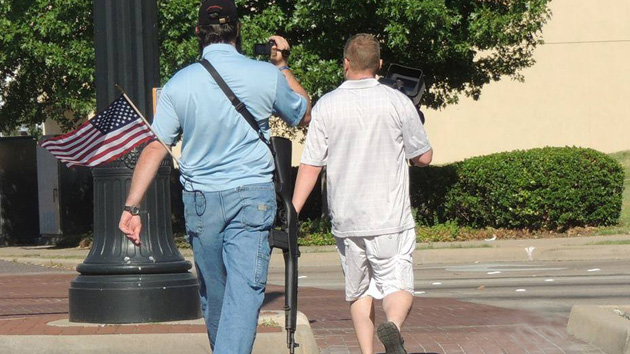 A gun activist pursues a Marine vet through downtown Fort Worth. Screenshot: Facebook

On Memorial Day this week, a former Marine in Texas named James got a couple calls from friends who’d spotted an unusual gathering in downtown Fort Worth: Roughly a dozen people, mostly men, were hanging out in the middle of the city’s cultural district, armed with semi-automatic rifles. James quickly knew what his friends were describing, having recently encountered an open-carry demonstration himself in the Dallas-Fort Worth area. An independent TV commercial producer who sometimes films live events, James headed downtown with his camera to get some footage.

What he saw there struck him as especially provocative. Not only had the open-carry activists come to a typically relaxed, family friendly part of town, they were displaying intimidating firearms just three days after a major gun massacre in Southern California. What he didn’t anticipate was that they would soon be pursuing him for several city blocks with cameras of their own, harassing him and later posting the footage online, where they would also level homophobic slurs and violent threats against him.

Women who speak out have been the primary target for gun activists, as I detailed in a recent investigation. But now, on a day meant to honor fallen service members, a military vet would make the hit list.

The men, members of the groups Open Carry Texas and Open Carry Tarrant County, asked him which news network he was with. When he said he wasn’t, things began turning frosty. They pressed him about what he thought of their demonstration, and he replied with an unvarnished opinion that included profanities, language he told me he regrets having used.

“I’m all for responsible gun owners,” he says. “What I was taught was not to wear it around like a gold chain. What they’re doing is irresponsible. It intimidates the public, and people have just as much right to be comfortable in their public environment as these guys have a right to own their firearms.”

Suddenly he was surrounded by about a half-dozen armed men. They started badgering him with questions and accusing him of being anti-American. “I said, ‘Are you kidding me? I served in the military.’ They were trying to intimidate me, and when I didn’t cower that upset them,” he said. But he was starting to feel nervous and decided to disengage and walk away.

In a video obtained by Mother Jones that was posted online later that day by one of the activists, the group can be seen pursuing and harassing James through downtown Fort Worth. “I’m following this guy around,” declares one of them, setting off after him with his weapon slung across his back. He and others stay right behind James for several city blocks, following him through traffic and taunting him along the way. James grows more agitated and tells them off, calling them assholes and bullies.

“We’re being polite, you’re calling people names,” one of the gun activists pursuing him says.

“You’re not being polite out here with assault rifles the weekend after people lost their children,” James retorts, before again trying to walk away.

The harassment continues down the street. “Are you gonna cry?” one says. “Sounds like you’re about to cry.” Another says: “What’s wrong with that guy—is he a liberal?

“Yeah,” the other replies.

Eventually they follow him to a parking lot (where, in the background, there just so happens to be a Chipotle). As James gets into his vehicle, the gun activists zoom in on his company’s name and contact info appearing on the side of his truck, as well as his license plate, vowing to post it all online. [Mother Jones has redacted the personal information they included in the video.]

After the video went up on YouTube and Facebook, James pushed back in the comments sections, only to be met with increasing hostility.

“That guy obviously thinks he’s a badass talking shit to armed citizens,” one gun activist said. “When [the shit hits the fan] I’ll be happy to smash assholes like him.”

When one of the guys who’d followed him suggested posting the video to multiple sites, another said they should “put really gay background music to it.”

“He wasn’t Marine Corps infantry,” declared another. “Or he got out due to ‘don’t ask don’t tell.’ What a fruit.”

“Who here wants to help ruin him?” said another.

The footage the group posted was not the first such effort to intimidate by exposing someone’s personal information: As I reported recently, in April members of Open Carry Texas outed a concerned schoolteacher who had called police in Plano, Texas, and she was soon hit with a barrage of harassment and violent threats by phone and email. James faced similar treatment this week, he told me, with harassers saying he was a “fucking faggot” and “this guy needs his jaw broken.”

James shared his story only reluctantly, but he is also adamant, he says, that what the gun activists are doing is wrong. And he’s far from alone in that view: He has since also received many positive calls and messages of support, he says—including from a couple of vocal open-carry supporters, one of whom invited him to go to a firing range together.

After multiple rejections from corporate restaurants and a wave of negative publicity, several Texas open-carry groups put out a joint statement last week asking their supporters to dial back the provocative tactics. Some hardcore followers balked at that, but now even some rank and file gun activists have expressed doubt in online comments about this latest incident. “Following him makes you the bad guy and could be considered intimidation,” one said. A member of Open Carry Texas—who himself participated in that group’s intimidation tactics against women—also disapproved of the footage, or at least of its public airing. “Nothing about this video benefits our movement,” he said.