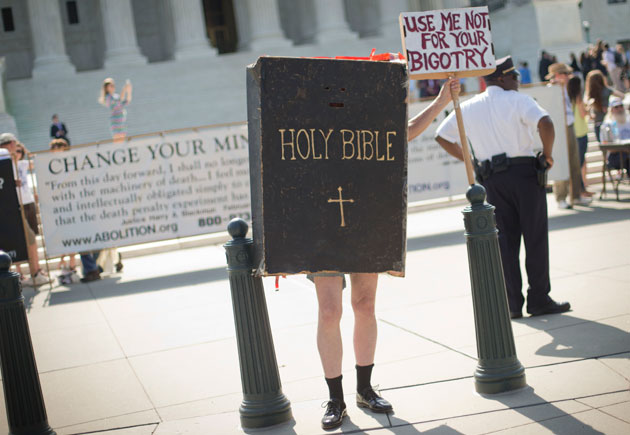 In his majority opinion in the recent Hobby Lobby case, Supreme Court Justice Samuel Alito took pains to frame the ruling, exempting companies from complying with Obamacare’s contraceptive mandate if it violated the religious beliefs of their owners, as a narrow one. But gay and civil rights groups have long warned that a decision permitting such a religious exemption could have broad ramifications, potentially allowing employers to discriminate against gays. Now, their fears may be coming to pass.

“What we’ve seen since last week’s decision came down is that opponents of LGBT equality have pushed a misreading of that decision as having broadly endorsed discrimination against people, including LGBT people in the workplace,” says Ian Thompson, a legislative representative for the American Civil Liberties Union.

Cecile Richards, president of the Planned Parenthood Action Fund, told Mother Jones that the Hobby Lobby ruling “opens the door for corporations to discriminate against anyone that doesn’t look, sound, or share the religious beliefs that they do. This isn’t a business agenda; it’s an extreme social agenda and it is deeply unpopular with the American people.”

Workplace discrimination has been a major issue for gay and civil rights advocates for years. Congress took up the issue last year with the introduction of the Employment Non-Discrimination Act (ENDA), which would forbids discrimination based on sexual or gender identity, but includes an exemption for religious entities including hospitals, universities, and nursing homes. On Tuesday, the ACLU and several prominent LGBT rights groups, including Lambda Legal and the Transgender Law Center, issued a statement announcing they had decided to pull their support for ENDA over the exemption. The groups cited the Hobby Lobby decision as one reason they could no longer back the bill.

Given the types of workplace discrimination we see increasingly against LGBT people, together with the calls for greater permission to discriminate on religious grounds that followed immediately up on the Supreme Court’s decision last week in Burwell v. Hobby Lobby, it has become clear that the inclusion of this provision is no longer tenable.

Apart from ENDA, Obama announced in June that he would sign an executive order barring employers who discriminate against LGBT people from receiving government contracts. That announcement came after years of pressure from LGBT rights groups, who called on him to act against gay discrimination. But since Hobby Lobby, prominent religious leaders have pressed for an exemption to the executive order.

On July 1, a day after the Supreme Court’s decision, Pastor Rick Warren, who spoke at Obama’s 2009 inauguration, and the Reverend Larry Snyder, CEO of Catholic Charities USA, were among a group of religious leaders who sent a letter to Obama asking him to include a “robust religious exemption” in his executive order that was “comparable” to the one enshrined in ENDA.

“While the nation has undergone incredible social and legal change over the last decade, we still live in a nation with different beliefs about sexuality,” the letter reads. “We must find a way to respect diversity of opinion on this issue in a way that respects the dignity of all parties to the best of our ability.”

The ACLU’s Thompson says: “Effectively what they’re doing is asking President Obama to endorse taxpayer-supported LGBT employment discrimination, and for LGBT people to subsidize our own workplace discrimination.”

While the letter from religious leaders did not include a direct reference to the Hobby Lobby case, Warren has already weighed in on the controversy, having cast the fight for “religious liberty” as among the most important social issues of our time. In January, he issued a statement of support, saying:

I predict that the battle to preserve religious liberty for all, in all areas of life, will likely become the civil rights movement of this decade. If it takes a popular movement to reign in overreaching government, then Hobby Lobby’s courageous stand…will likely be considered the Birmingham bus boycott, where good citizens finally got fed up with having their rights trampled on, and decided to challenge those who favor conformity over freedom.

Meanwhile, in Congress, a few Senate Democrat have decided to take on Hobby Lobby by introducing a bill that would bar employers from blocking preventative health care measures guaranteed by federal laws, including the Affordable Care Act. Even if the legislation made it through the Senate, it has zero likelihood of passing the Republican-controlled House.