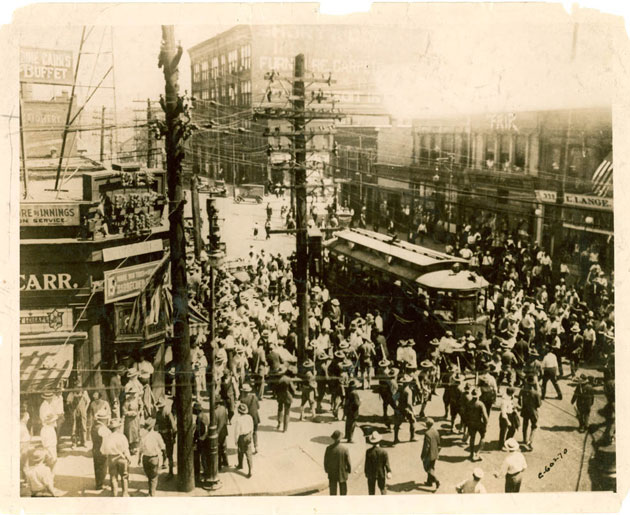 A mob blocks a street car during the East St. Louis Riot of July 1917 University of Massachusetts-Amherst Libraries

The shooting of Michael Brown in the St. Louis suburb of Ferguson, Missouri, and the subsequent riots, protests, and police crackdown have highlighted the area’s long history of racial strife. One chapter from that history, a century-old summer riot just fourteen miles away from Ferguson, in East St. Louis, Illinois, shows how black Americans were subjected to racial violence from the moment they arrived in the region.

In 1917, East St. Louis was crowded with factories. Jobs were abundant. But as World War I halted the flow of immigration from Eastern Europe, factory recruiters started looking toward the American South for black workers. Thousands came, and as competition for jobs increased, a labor issue became a racial one.

East St. Louis’ angry white workers found sympathy from the leaders of the local Democratic party, who feared that the influx of black, mostly Republican voters threatened their electoral dominance. In one particularly striking parallel to today’s political landscape, local newspapers warned of voter fraud, alleging that black voters were moving between northern cities to swing local elections as part of a far-reaching conspiracy called “colonization,” according to the documentary series Living in St. Louis. 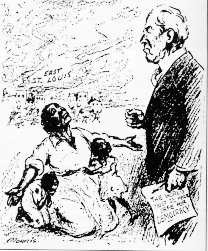 A cartoon from the time of the riot, lambasting then-president Woodrow Wilson for making the world “safe for democracy” while ignoring the plight of East St. Louis. Wikipedia

That May, a local aluminum plant brought in black workers to replace striking white ones. Soon, crowds of whites gathered downtown, at first protesting the migration, then beating blacks and destroying property. On July 1, a group of white men drove through a black neighborhood, firing a gun out their car window. (The perpetrators were never caught.) A few hours later, another car drove through the neighborhood. Black residents fired at it, killing two police officers.

On July 2, as news of the killings got out, white residents went tearing through black neighborhoods, beating and killing blacks and burning some 300 houses as National Guard troops either failed to respond or fled the scene. The official toll counted 39 black and eight white people dead, but others speculated that more than a hundred people died in what is still considered one of the worst incidents of racial violence in twentieth-century America. Afraid for their lives, more than six thousand blacks left the city after the riot.

That the United States was then fighting in Europe to defend democracy while failing to protect its own citizens was not lost on Marcus Garvey, soon to become one of the most famous civil rights leaders of his time: “This is no time for fine words, but a time to lift one’s voice against the savagery of a people who claim to be the dispensers of democracy,” he said to cheers at a speech in Harlem on July 8. “I do not know what special meaning the people who slaughtered the Negroes of East St. Louis have for democracy… but I do know that it has no meaning for me.”