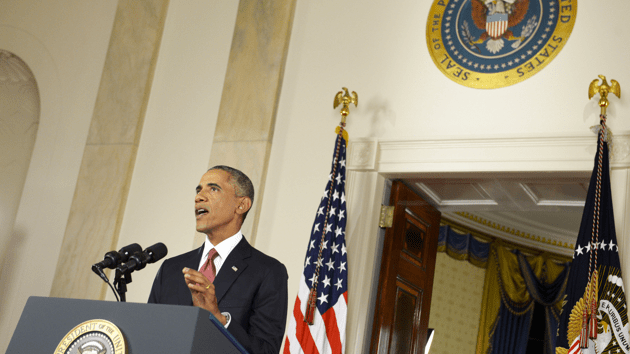 In his speech Wednesday night, President Barack Obama said he would “welcome congressional support” for his expanded-but-limited plan to destroy ISIS, the terror organization wreaking havoc in Iraq and Syria. But Obama conspicuously did not say he would ask lawmakers to vote on whether to approve this military action. The White House insists that a previous congressional authorization approving military action against Al Qaeda and its affiliates allows Obama to go forward without seeking another explicit green light from Capitol Hill. And once again, the nation is witnessing another round in the decades-long tussle between the legislative branch and 1600 Pennsylvania over the limits of the president’s war-making power. Many lawmakers seem happy to give the president a pass because they’d rather not vote on the matter—especially in an election year. (As GOP Rep. Jack Kingston of Georgia candidly said, “A lot of people would like to stay on the sideline and say, ‘Just bomb the place and tell us about it later.’ It’s an election year. A lot of Democrats don’t know how it would play in their party, and Republicans don’t want to change anything. We like the path we’re on now. We can denounce it if it goes bad, and praise it if it goes well and ask what took him so long.”) But an odd-couple coalition is developing within Congress: liberal Dems and conservative Republicans who are demanding that the president seek a congressional okay before escalating attacks against ISIS.

“Congress must weigh in when it comes to confronting ISIL through military action,” Reps. Raul Grijalva (D-Ariz.) and Keith Ellison (D-Minn.), the chairs of the 70-member Congressional Progressive Caucus, said in a statement after Obama’s speech. “The voices of the American people must be heard during a full and robust debate in Congress on the use of military force.”

On the other side of the aisle, Sen. Rand Paul (R-Ky.) took a similar stance, though he was more vociferous. “[I]t is unconstitutional what he’s doing,” the potential 2016 contender told Fox News Wednesday night. He tweeted later: “The Constitution is very clear. The power to declare war resides in Congress.” Senate Republican leader Mitch McConnell (R-Ky.) almost agreed with his fellow Kentuckian, noting before the speech that Obama should seek approval from lawmakers. But an aide clarified that McConnell was not demanding that Obama ask Congress for permission.

In July, 100 House Democrats and Republicans sent a letter to the White House insisting Obama come to Congress before ramping up military action against ISIS. Fifty-one of the signers are members of the progressive caucus. Eleven are Republicans, nine of whom are affiliated with the tea party.

And Obama’s speech triggered protest and outrage from Ds and Rs who share the belief that acts of war have to be okayed by Congress—but who might not agree with each other on whether the president’s new-ISIS initiative is warranted. A sampling:

The White House’s contention that no new authorization is necessary has been challenged by assorted constitutional law experts. Several note that ISIS is not an Al Qaeda affiliate. In fact, Al Qaeda formally renounced the group in February. So the 2001 military authorization targeting Al Qaeda should not apply to the current situation, says Bruce Ackerman, a professor of law and political science at Yale. (Obama himself vowed last year to repeal that authorization.) Before the president outlined his strategy Wednesday, Ackerman noted, “It would be a tragedy for Obama to say that even though Bin Laden is dead and Al Qaeda in Afghanistan is gone, [ISIS] is an associated force of Al Qaeda.” (But defensive actions and humanitarian interventions taken to thwart ISIS in Iraq would be allowed under the War Powers Act, the often-debated, post-Vietnam legislation that supposedly governs the president’s use of military force.)

Congressional leaders, notably, are not howling about the president’s decision to sidestep Congress. In June, when Obama was considering launching air strikes against ISIS, McConnell and House Speaker John Boehner (R-Ohio), along with House Minority Leader Nancy Pelosi (D-Calif.) and Senate Majority Leader Harry Reid (D-Nev.), agreed that the president already possessed the legal authority to take action in Iraq without asking Congress. Meanwhile, Republican hawks, such as Sens. John McCain (R-Ariz.) and Lindsey Graham (R-S.C.), have been pushing Obama for weeks to pour more troops and money into Iraq—without fretting about congressional approval.

Reps. Barbara Lee (D-Calif.), Jim McGovern (D-Mass.), and Walter Jones (R-N.C.) are pushing Boehner to bring to the House floor legislation that would authorize Obama’s beefed-up anti-ISIS campaign. The speaker has not committed to holding such a vote—but Congress will likely have to pass legislation specifically to authorize spending for expanded assistance to the opposition in Syria (which is fighting ISIS in the multisided civil war there). Yet an up-or-down vote that would force legislators to take a stand on Obama’s overall war on ISIS is not guaranteed. What remains to be seen is whether the left-right coalition challenging presidential prerogative can turn this policy dispute into a true political brawl.