Can’t Touch This: Why nobody in DC messes with the Pentagon budget.

Today’s the last day for Congress to pass a budget deal and avert a government shutdown. Part of the $1.1 trillion “Cromnibus” package is the 2015 defense budget. While there’s been some wrangling over pay and benefits for service members, finalizing the Pentagon budget has been relatively uncontentious.

That’s because the Pentagon is one of the few recipients of discretionary spending that most budget-slashing tea partiers and entitlement-friendly Democrats are reluctant to touch. If the current deal passes, the Pentagon’s total funding in the 2015 fiscal year, including war-fighting costs, will come in at around $554 billion—close to what it got during the height of the Iraq War. 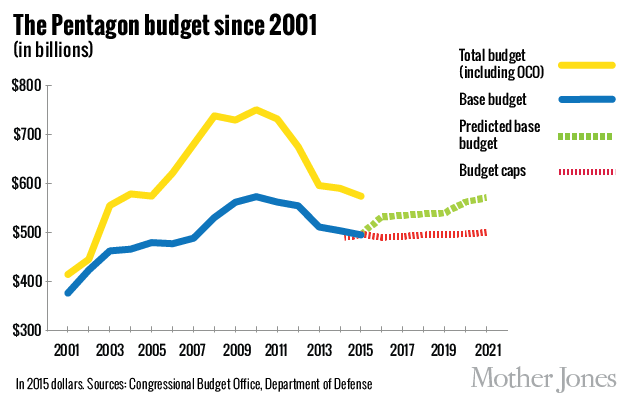 To be fair, the Pentagon is making do with less. Its total budget has shrunk more than 20 percent since it recently peaked in 2010. The bipartisan sequestration deal that went into effect in 2013 is supposed to keep it on a diet for the foreseeable future. However, those budget caps are looking more and more like irksome suggestions rather than requirements. Congress gave the military a partial reprieve from the caps last year, and even President Obama has spoken out against “the draconian cuts that are called for in sequestration.” 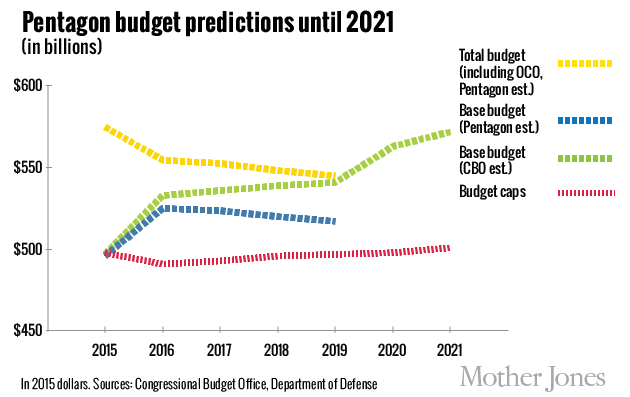 One workaround for the budget caps is the Pentagon’s war-fighting budget, a.k.a. Overseas Contingency Operations (OCO). Since it’s not part of the base budget subject to automatic caps, some critics have described it as “an off-budget war chest slush fund.” The current defense budget before Congress authorizes more than $63 billion for overseas operations, including ongoing operations in Afghanistan, the air campaign against ISIS, and the military response to Ebola in West Africa. There is no similar safety valve for nondefense discretionary programs, whose funding has dropped 15 percent since 2010, according to the Center on Budget and Policy Priorities.

And just to keep things in perspective: Even with sequestration and the withdrawal of troops from Afghanistan, defense spending remains close to its highest level since World War II. 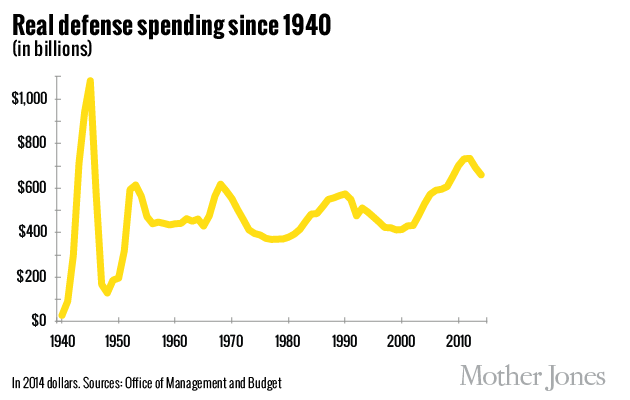