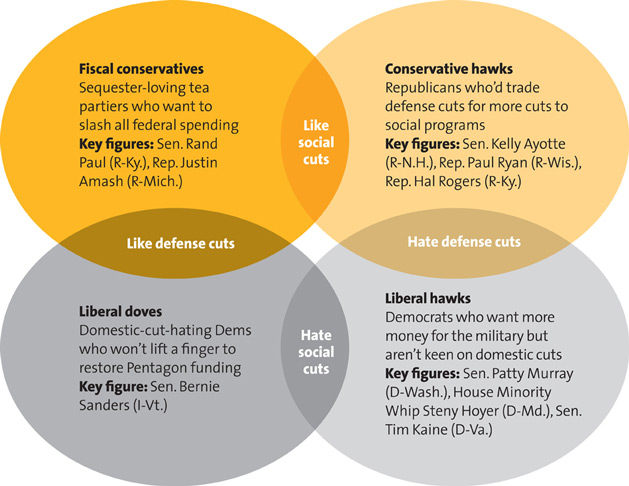 The House just passed the Ryan-Murray budget deal, signaling an unexpected end to the cycle of budget crises and fiscal hostage-taking. A few weeks ago, such an agreement seemed distant. Sequestration had few friends on the Hill, but the parties could not agree on how to ditch the automatic budget cuts to defense and domestic spending. Republicans had proposed increasing defense spending while taking more money from Obamacare and other social programs, while Democrats said they’d scale back the defense cuts in exchange for additional tax revenue. Those ideas were nonstarters: Following the government shutdown in October, Senate Majority Leader Harry Reid (D-Nevada) called the idea of trading Social Security cuts for bigger defense budgets “stupid.”

Which explains why Rep. Paul Ryan and Sen. Patty Murray’s deal craftily dodged taxes and entitlements while focusing on the one thing most Republicans and Democrats could agree upon: saving the Pentagon budget. Ryan’s budget committee previously declared the sequester “devastating to America’s defense capabilities.” Murray had warned of layoffs for defense workers in her state of Washington as well as cuts to combat training if sequestration stayed in place.

The chart above shows why military spending is the glue holding the budget deal together. It also shows how any remaining opposition to the bill in the Senate may bring together even stranger bedfellows than Ryan and Murray: progressive dove Bernie Sanders (I-Vt.) and sequestration fan Sen. Rand Paul (R-Ky.).

We’ve got much more coming on military spending and how the Pentagon just dodged a budgetary bullet. Stay tuned.