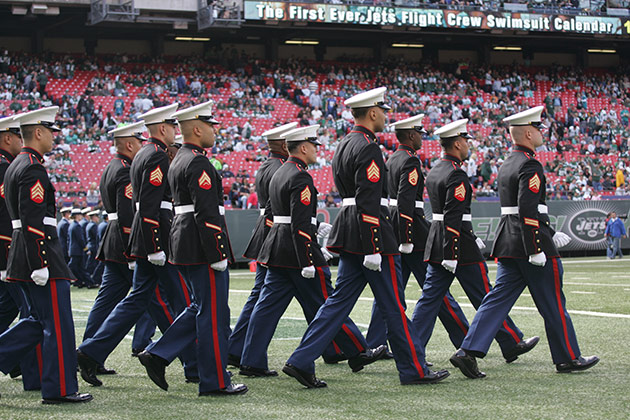 For the last three years, the Department of Defense has forked over $5.4 million to 14 NFL teams to pay respect to service members during games. And while that’s a small line in the behemoth Pentagon budget, at least one GOP senator isn’t thrilled about it.

Sen. Jeff Flake (R-Ariz.) criticized the “egregious and unnecessary waste of taxpayer dollars” on Monday after a weekend report by NJ.com found the Defense Department and the New Jersey National Guard paid the New York Jets $377,000 for in-game salutes and promotional activities at professional football games. The Atlanta Falcons received more than $1 million during that time, while the Baltimore Ravens raked in $885,000.

“While it may be appropriate for the National Guard or other service branches to spend taxpayer funds on activities directly related to recruiting,” Flake said, “giving taxpayer funds to professional sports teams for activities that are portrayed to the public as paying homage to US military personnel would seem inappropriate.”

What did the National Guard get in return? From NJ.com‘s Christopher Baxter and Jonathan Salant:

The agreement includes the Hometown Hero segment, in which the Jets feature a soldier or two on the big screen, announce their names and ask the crowd to thank them for their service. The soldiers and three friends also get seats in the Coaches Club for the game.

Also, soldiers attended the annual kickoff lunch in New York City to meet and take pictures with the players for promotional use, and the Jets allowed soldiers to participate in a charity event in which coaches and players build or rebuild a playground or park.

Flake, who first highlighted the National Guard’s spending as part of his #PorkChops campaign on wasteful spending, said his office had found “a number of advertising and promotion contracts between the Pentagon and professional sports teams in the MLB, NBA, NASCAR, Major League Soccer and the NCAA,” according to the Hill.

Here’s the full list of NFL teams that received DOD money, via NJ.com: