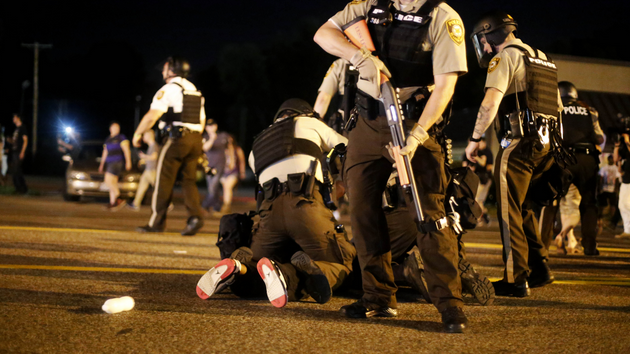 As new clashes between the police and protesters in Ferguson, Missouri, revive concerns about the growing use of military-type gear by local cops, the Pentagon has ordered Ferguson to return two Humvees that came straight off the battlefields of Iraq or Afghanistan.

But it’s not because of the way Ferguson police officers have responded to the demonstrators, government officials say; it’s a paperwork issue.

The Guardian, which broke the story, reports that the government is repossessing the vehicles because Missouri’s state coordinator for the Pentagon’s controversial 1033 program gave Ferguson four Humvees when it was only authorized to give two.

Established in the 1990s, the 1033 program has stocked local police arsenals with $5.6 billion in combat equipment left over from two foreign wars. Protests in Ferguson over the police shooting of Michael Brown, an unarmed black teenager, thrust the program into the spotlight last summer after officers responded to the demonstrators with a militarized show of force, including mine-resistant vehicles, combat-style assault rifles, and gas masks.

At protests to mark the one-year anniversary of Brown’s killing, the police show of force has been only a little less aggressive.

Civil liberties advocates have called for curtailing or ending the program, and for cutting off other, larger funding streams that help local cops buy combat equipment as a way to strengthen the line between the police and soldiers. But the Pentagon’s move to take away two war-ready Humvees does not demilitarize Ferguson’s police force. Ferguson acquired four Humvees through the 1033 program; the Pentagon is only forcing the return of two vehicles. And the Pentagon is not suspending or expelling the city of Ferguson from the 1033 program, the Guardian reports.

What’s more, officers are streaming into the community from law enforcement agencies all over St. Louis County, bringing with them their own departments’ combat gear.

The Obama administration has announced several changes to the controversial 1033 program since the chaos of last year. Civil rights advocates hope a new White House requirement—for police departments to receive community approval before acquiring armored tactical vehicles—will stanch the flow of some of the most intimidating vehicles. Mine-resistant, ambush-protected trucks, for example, are routinely made available through the program.

But the changes do not apply to weapons, equipment, and vehicles that are already in police armories across the country. And as Radley Balko, the top reporter covering police militarization today, noted in the Washington Post last year, very little of Ferguson’s military-type vehicles, assault weapons, and protective gear actually came from the 1033 program:

Most of the militarization today happens outside the 1033 Program. As the Heritage Foundation reported last year, few of the weapons we saw in those iconic images coming out of Ferguson were obtained through 1033. That program created the thirst for militarization, but police agencies can now quench that thirst elsewhere. Since 2003, for example, the Department of Homeland Security has been giving grants to police departments around the country to purchase new military-grade gear. That program now dwarfs the 1033 Program. It has also given rise to a cottage industry of companies that build gear in exchange for those DHS checks.

Communities that decide on their own to get rid of equipment from the 1033 program often have a lot of trouble doing so. The Pentagon technically has a process for returning unwanted equipment. But in reality, as I reported last year, police departments across the country have found that the process doesn’t always work.

Online law enforcement message boards brim with complaints that the Pentagon refuses to take back unwanted guns and vehicles—like this one, about a pair of M14 rifles that have survived attempts by two sheriffs to get rid of them.

“The federal government is just not interested in getting this stuff back,” says Davis Trimmer, a lieutenant with the Hillsborough, North Carolina, police department. Local law enforcement officials and Pentagon liaisons interviewed by Mother Jones all agree that the Defense Department always prefers to keep working equipment in circulation over warehousing it. Trimmer has twice requested permission to return three M14 rifles that are too heavy for practical use. But the North Carolina point person for the Pentagon insists that Hillsborough can’t get rid of the firearms until another police department volunteers to take them. Police in Woodfin, North Carolina, are facing the same problem as they try to return the town’s grenade launcher.

Ultimately, the police and sheriffs have found, the easiest way to offload their combat gear is to transfer it to another local law enforcement agency—an option that obviously troubles local officials who wish to get rid of the gear on principle.

In fact, the Pentagon has already said the two extra Ferguson Humvees may go to another police department in Missouri. And they could end up with one of the many departments sending officers and equipment to the scene of these protests—meaning these very same vehicles could roam the streets of Ferguson once again.