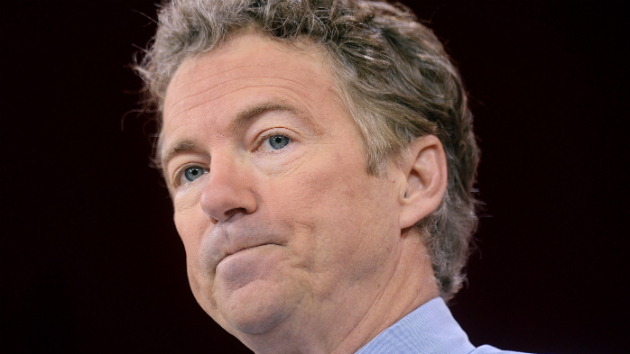 Just hours after three Rand Paul associates were indicted on federal charges that they worked to cover up an attempt to buy an Iowa state senator’s endorsement for the 2012 Ron Paul campaign, the Paul camp is claiming that the indictments are timed to trip up the Kentucky senator on the eve of the first GOP presidential debate. All three men were involved with the 2012 Paul campaign, but have worked for the family for years, including to help get Rand Paul elected.

Shortly after the indictments were announced, Ron Paul issued a statement, saying, “I think the timing of this indictment is highly suspicious given the fact that the first primary debate is tomorrow.” Roscoe Howard, the attorney for Paul’s grandson-in-law Jesse Benton, one of the three men who were indicted and the head of a pro-Rand Paul super-PAC, echoed the sentiment to the Washington Post:

“We are deeply disappointed to learn of today’s indictment by the Department of Justice,” said Howard. “Jesse Benton, a prominent conservative Republican, has cooperated with the government during its multi-year investigation. That this indictment is now suddenly announced on the eve of the first Republican Presidential debate strongly supports our belief that this is a politically motivated prosecution designed to serve a political agenda, not to achieve justice. Mr. Benton is eager to get before an impartial judge and jury who will quickly recognize this for what he believes it is: Character assassination for political gain.”

But how unexpected was this move?

First of all, the Ron Paul 2012 campaign has spent more than $434,000 on legal bills since last summer. The fees suddenly spiked around the end of July 2014, a period that, according to today’s indictment, involved meetings between Benton and federal investigators. Another of the indicted men, John Tate, who also works for the same pro-Rand Paul super-PAC, also met with federal investigators last July. The following month, a grand jury subpoenaed emails from many members of the Paul campaign. The subpoena, which was publicly leaked, listed the email accounts of all three men, as well as that of Ron Paul himself, as targets of the investigation.

Earlier this month, Eugene Delgaudio, a political activist from northern Virginia who is a friend of the third man indicted today, Dimitri Kesari, circulated an email soliciting donations for a legal defense fund for Kesari. Kesari established the fund, a nonprofit called Defenders of Liberty Legal Defense Foundation in Colorado, this past February. There are also links between Paul’s campaign and Kesari’s attorney. When Kesari appeared in court this morning in Iowa, he was represented by attorney Jesse Binnall. According to campaign filings, the Ron Paul campaign paid Binnall’s firm $20,000 on December 29, 2014 and again on Feb. 4. On June 12 of this year the campaign also wrote a $2,800 check for the firm representing Benton.

People familiar with the way the Department of Justice’s Public Integrity Section pursues indictments said it was unlikely there would not have been extensive contact between prosecutors and lawyers of the accused and an awareness that charges were coming. It is not uncommon for defense attorneys to have an opportunity before an indictment is handed down to appeal the decision to higher-ups within the Department of Justice. All evidence suggests that the indictments were hardly a surprise sprung on the Paul camp during the frantic final preparation for Thursday’s debate.