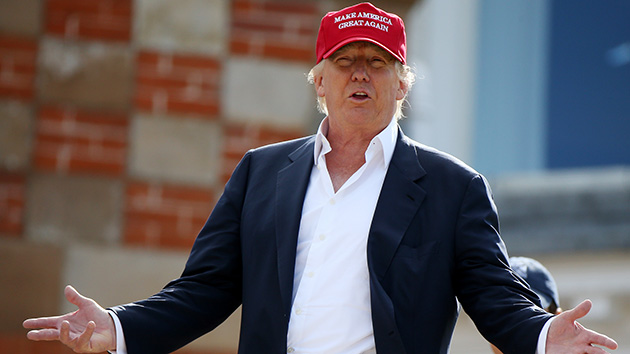 Donald Trump is breaking every rule in the “how to be a candidate” handbook—and maybe that’s his secret.

Unlike the often-stodgy conventional political campaign, Trump’s presidential bid resembles the rollout of a consumer brand. The reality TV star and real estate mogul has a keen knack for self-promotion and an entertaining product to peddle (his unfiltered self), and this is letting him get away with things his opponents can only dream of.

For instance, one key rule of running for president is that you should never, ever put on a hat—or any headwear. You will look goofy and unpresidential. (Remember what happened to Michael Dukakis?) But when Trump arrived to inspect the Mexican border last month, he strolled off his plane wearing an ill-fitting plain white cap, adorned with the words “Make America Great Again.” And he’s worn the hat pretty much everywhere since, sometimes exchanging it for a red version. Arguably, Trump could not make a public appearance outdoors without a cap—it’s unclear how his complexly coiffed mane might react to weather—but the image was as unstylish as any presidential candidate has managed recently. And yet, it works. As Slate put it in an article devoted entirely to Trump’s hat, “Juxtapose almost anything with Trump’s sour puss, and you’ve got yourself an indelible image.”

Despite the conventional wisdom that hats are a nightmare for a politician’s image, last week, at a focus group of Trump supporters run by GOP pollster Frank Luntz, the hat was a high point.

Luntz gushed over the results of the session, claiming the level of avowed support for Trump articulated by the participants stunned him. “Like, my legs are shaking,” he told reporters afterward.

It was a small sample size, and maybe it’s not just the hat. There’s also the catchphrase. “Make America Great Again” is compelling in a way that other candidates’ slogans aren’t, says Tom Bassett, CEO at Bassett & Partners, a San Francisco brand and design strategy firm. Getting consumers to remember a product’s slogan is extremely difficult. Only a handful of brands ever achieve a level of awareness where the line can be recalled with ease. Bassett, who has overseen international ad campaigns for Nike, Apple, and Yahoo, thinks the phrase has an unusual resonance—a nostalgia for American success.

The message is simple and easy to process, Bassett says: “People are a little fearful and they’re looking for someone with a really firm hand to say, ‘We’re going to make it, we’re going to be great again!’ versus anything too intellectual.” He adds, “‘Make America Great Again’ has a sense of mission to it; it’s clear to the reader/viewer,” Bassett says. “Maybe there is something about the clarity of his mission that makes it easier for people to respond to him.”

But for all the synergistic branding effort, Walker is polling in the mid- to high single digits in most polls. (Trump is over 30 percent.)

Jeb Bush, meanwhile, has methodically built his campaign around the phrase “Right to Rise,” which is also the name of his super-PAC. But it isn’t a natural turn of phrase, and even Bush has to conspicuously shoehorn it into speeches.

Bassett asks, are “‘unintimidated’ or ‘right to rise’ a mission statement people can sign up for?”

Bassett compares Trump’s catchphrase to Nike’s legendary slogan. “It’s something you could say, in a way like ‘Just Do It’ might be something an athlete would say to another when you’re lifting weights,” he explains.

Kenneth Cosgrove, an associate professor of political science at Boston’s Suffolk University who has written about political branding, notes that though Trump shuns advice from the political class and sometimes appears to be rambling, there is a pattern and an innate logic to how he communicates with an audience. “Trump comes across as very confident, willing to listen and talk, but he does it in a way that makes him look strong and powerful, and conservatives like that,” Cosgrove says. “I think it’s smart and takes more thought than it looks like. I think Trump has a plan on how to sell things, and right now he thinks he’s selling a good product.”

And that’s possibly the key. Trump is acting like a consumer brand, Bassett says, by focusing on establishing a favorable overall identity rather than trying to win over voters with specific policy stances, like politicians usually do. Think about it this way: When trying to sell consumers a product that has many similar competitors—for example, a cereal—the advantage is won by establishing an identity with strong cultural associations, not by arguing about the cereal’s fiber content or even flavor, Bassett says.

John Tantillo, a branding and marketing expert with an academic background in applied research psychology, boils it down further: Because Trump has avoided being packaged as a political brand, he doesn’t have to act like one; he can just be entertaining.

“Trump is not a political brand—he is an entertainment brand,” Tantillo says. “With branding it’s got to satisfy a need, and right now [Trump] is satisfying a need for us to be entertained.” Tantillo adds: “He is great television. He knows how to do this, and these other politicians are so stiff and really can’t do that and, for the most part, their political consultants tell them not to.”

Trump’s schtick is not necessarily original, though.

Cosgrove and Bassett both note that Trump’s slogan and persona are not-so-subtle throwbacks to Ronald Reagan. Reagan actually used the phrase “Let’s Make America Great Again!” as well as the similar “Morning Again in America.” Pointing to similarities with Trump, Cosgrove says, “In a lot of ways, Reagan was as much a mood and a feeling as he was any set of policies.”

Trump’s speeches are littered with short declarative exclamations, often devoid of substance but relentlessly confident. He often announces his intention to make people proud, and this seems to be enough for many of his supporters.

“If I am president, you’re going to be so proud of this country, you will be the happiest people,” he said last week on the stump. At a rally in Alabama the week before, he said, “I’m going to be the greatest jobs-president that God ever ­created. You are going to be so proud.” Though he never explained the crucial matter of how he’s going to do this, his supporters don’t seem to care. They are buying the Trump confidence.

At some point, Tantillo suspects, the Trump entertainment brand is going to collide with political reality. “Right now it’s fun, it’s great, and we’re all having a ball,” he says. “But what happens when your primary time comes and you have to make a decision: ‘Do I want to be entertained, or is this the guy I really want?'”