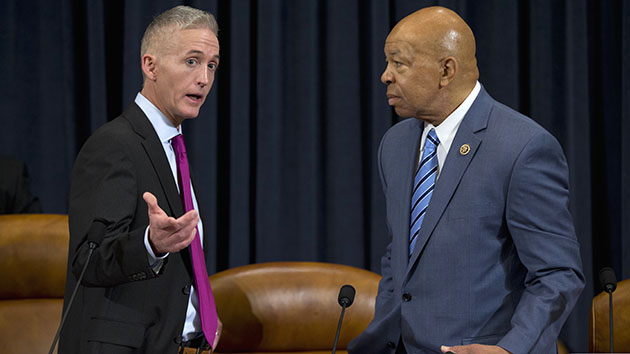 Benghazi Committee Chairman Trey Gowdy, left, talks with the committee's ranking Democrat, Elijah Cummings, on October 22, 2015, prior to the start of the committee's hearing on Benghazi.Evan Vucci/AP

The first Republican to grill Hillary Clinton at Thursday’s House Benghazi committee hearing did not ask about the attack at the US diplomatic compound or about problems of security there. Instead, he tried to establish another talking point that could be useful for Republicans in 2016: the then-secretary of state was responsible for the Obama administration’s decision to intervene in Libya in 2011 and, therefore, is to blame for the Benghazi attacks and everything else that has happened in that chaos-ridden country ever since.

Rep. Pete Roskam (R-Ill.) depicted Clinton as the main driver of President Barack Obama’s decision to intervene in Libya, crediting her with bringing both the White House and the international community on board. “There were senior voices within the White House that were opposed to military action—Vice President Biden, Department of Defense, Secretary Gates, the National Security Council, and so forth. But you persuaded President Obama to intervene militarily. Isn’t that right?”

When Clinton noted that a number of US allies were pressuring the Obama administration to take action, Roskam said, “I think you are underselling yourself.”

Our Libya policy couldn’t have happened without you because you were its chief architect…After your plan, things in Libya today are a disaster.

It was a strange inquiry to begin with, and it seemed designed to fault Clinton for the entire Libya policy. Democrats on the Benghazi committee were quick to respond, blasting out an email noting that “the international community concluded that if it did not intervene, Qadhafi would slaughter thousands of Libyans.” The email noted that Republicans including Sens. John McCain and Marco Rubio agreed that action was needed.

Some reporters tweeted their bemusement at Roskam’s grilling of Clinton.

There’s now sworn taped testimony of her admitting she was Secretary of State in both 2011 AND 2012 https://t.co/aEhFsq7UPC

Roskam didn’t lay a glove on her. It’s not in dispute that Hillary was a main proponent of the Libya intervention.

These opening questions had little to do with what happened at the Benghazi compound. But they sure could yield clips useful for a Republican attack ad.