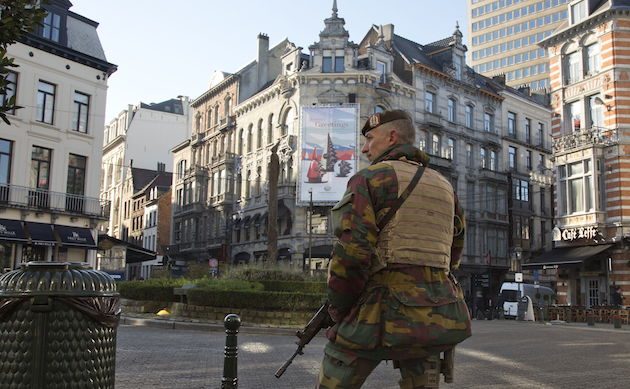 A Belgian Army soldier patrols in the Sablon District of Brussels on Monday.Virginia Mayo/AP

Brussels remains under lockdown for the third straight day as authorities continue to hunt down suspects in connection with the deadly terrorist attacks in Paris. As of Monday morning, a spokesman for the chief Belgian prosecutor said 21 people have been arrested in a series of anti-terror raids since Sunday.

Amid the crackdown, officials are also warning residents of a possible “serious and imminent attack” in the Belgian capital. Schools, underground public transit, and shopping centers are all closed, as Brussels remains at the highest level of terror alert.

One Cafe and one Chocolate shop, the only places open in the iconic Hubert’s arcade, #Brussels #BrusselsAlert pic.twitter.com/Bq3D7Gsgic

Over the weekend, the police requested that residents refrain from posting details of the raids on social media and potentially tipping the suspects off in the process. Twitter users followed through by flooding the platform with photos of cats in order to show a moment of levity and stamp out any possible security leaks.

On Monday, British Prime Minster David Cameron announced that he will seek parliamentary support to launch new airstrikes against ISIS in Syria. The Guardian reports that US special operation forces will be deployed in Syria “very soon.”