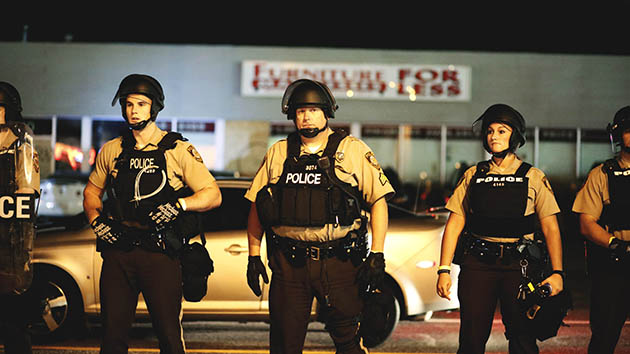 The national push to reform the criminal justice system saw two significant moves Wednesday, one from the law enforcement community and another from the activists who helped launch the conversation in Ferguson, Missouri, when Michael Brown was gunned down in August 2014.

On Wednesday, an organization known as Law Enforcement Leaders to Reduce Crime & Incarceration—which includes more than 160 police chiefs, sheriffs, district attorneys, federal prosecutors and attorneys general—sent a letter signed by more than 70 of its members to House and Senate leadership in support of legislation that would address sentencing guidelines. The Sentencing Reform and Corrections Act of 2015, sponsored in the Senate by Sen. Chuck Grassley (R-Iowa), would reduce federal mandatory minimum sentences for some gun and drug crimes, and would make it possible for federal prisoners to earn credits for completing rehabilitative programs while incarcerated and reduce their time behind bars. A similar measure sponsored in the House by Rep. Bob Goodlatte (R-Va.) also addresses some of these problems.

“Common sense might suggest that more punishment keeps down crime,” the group wrote. “But research has shown that arbitrarily increasing time served in prison does not necessarily translate into increased public safety gains…In fact, excessive incarceration can actually increase crime in some cases.”

The group noted that half of all federal prisoners are drug offenders (compared with just 7 percent who are convicted of violent crimes), so current sentencing approaches and prosecution efforts waste money and resources. The federal inmate population has grown more than 400 percent over the past 30 years, they wrote, and the Federal Bureau of Prisons is 39 percent over capacity and consumes a quarter of the Justice Department’s budget, in part because of tough-on-crime, mandatory minimum sentencing programs.

“These taxpayer dollars should instead target the country’s most dangerous and serious offenders, those who pose the most risk to public safety,” they wrote. (See the full letter below.)

While that effort focused on law enforcement reforms at the federal level, DeRay McKesson, Johnetta Elzie, Brittany Packnett, and Sam Sinyangwe—a group of activists who have been among the most prominent voices in calling for police reform in America—launched the Police Use of Force Project. This project of Campaign Zero, an effort to end police violence in America, published data outlining how policies governing police use of force often lead to police violence.

The data reveals use of force policies in several key areas for 17 major cities. (The data is downloadable, as well.) 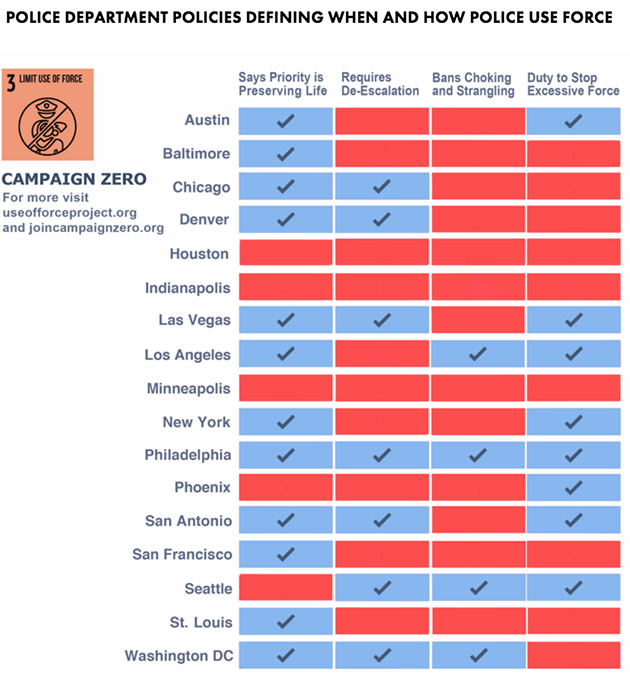 Police Use of Force Project

Policies “often fail to include common-sense limits on police use of force,” the group noted. For example, in many police departments, life preservation is not the primary objective, and many do not require officers to deescalate situations where possible. Policies often permit officers to “choke or strangle civilians,” and many do not require officers to intervene and stop the use of excessive force. Many of the police departments reviewed by the group lacked transparency in their use of force policies, did not provide public data on police shootings, did not keep tabs on incidents where force was used, and, in some cases, provided access to the names of those shot by the police.

“Our analysis…shows that while many police departments have adopted value statements claiming to prioritize the preservation of life, their actual use of force policies do not reflect this commitment,” the group wrote.

The survey is an ongoing process, and Campaign Zero asked community members to get to know police policies in order to become more engaged in police reform efforts.

“In the coming weeks, we will be forming a collective of legal scholars, academics, and activists to continue analyzing police use of force policies in the nation’s largest 100 cities, as we work to develop a model use of force policy that is fair and in the interest of the public good,” it wrote.

(See the Law Enforcement Leaders to Reduce Crime & Incarceration below):