Do you ever feel like a plastic bag, drifting through the wind, wanting to start again?

Then you probably voted for Ted Cruz. Bloomberg’s Sasha Issenberg has the most intriguing analysis of the Texas senator’s victory in last night’s Iowa caucuses, explaining how Chris Wilson, the Cruz campaign’s pollster and director of analytics, carved up the state’s eligible voters into 150 different categories with a borderline spooky precision. No issue was too small for the Cruz campaign—not even the legalization of fireworks sales, which are currently illegal in Iowa:

When there was no way that a segment could be rolled up into a larger universe, as was the case with the sixty Iowans who were expected to make a priority of fireworks reform, Cruz’s volunteers would see the message reflected in the scripts they read from phone banks, adjusted to the expected profile of the listener. A Stoic Traditionalist would hear that “an arbitrary ban of this kind is infringing on liberty,” as a messaging plan prepared by Cambridge Analytica put it, while Relaxed Leaders are “likely to enjoy parties and community celebrations, such as the 4th of July, and thus a fun-killing measure of this kind is unlikely to sit well with them.”

But here’s the best part:

Unlike most of his opponents, Cruz has put a voter-contact specialist in charge of his operation, and it shows in nearly every aspect of the campaign he has run thus far and intends to sustain through a long primary season. Cruz, it should be noted, had no public position on Iowa’s fireworks law until his analysts identified sixty votes that could potentially be swayed because of it.

And it’s true—fireworks reform might not be a big issue among Iowa voters, but it does look like a real pain to celebrate America’s independence if you live in Des Moines, a healthy two-hour drive from the nearest place to purchase fireworks legally. If you didn’t know what Iowa looked like, you could draw a near-perfect outline of the state just by connecting the dots of all the fireworks retailers on its borders seeking business from Hawkeye State fireworks enthusiasts: 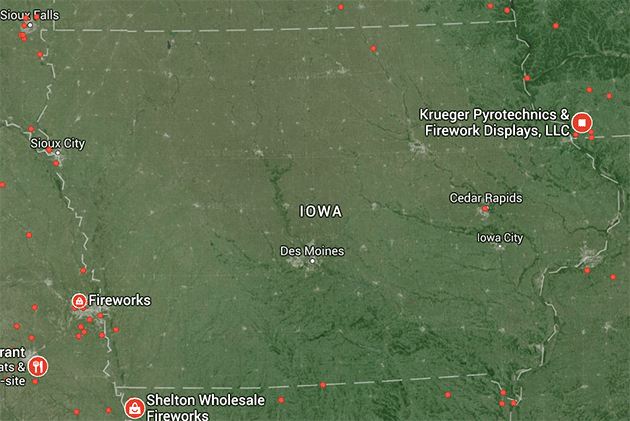 The reasons why Cruz prevailed go well beyond his campaign’s microtargeting. Maybe Trump should have considered spending real money, or investing in a better ground game himself, or—I’m reaching here—conducting his life in a way that didn’t thoroughly alienate the evangelical voters who comprised two-thirds of the electorate. But Cruz has proven that he’s a candidate who knows what he’s doing.