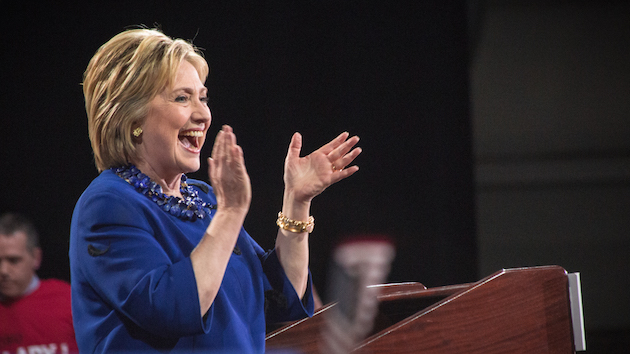 Voters headed to the polls in five states today as Donald Trump looked to continue his march to the GOP nominating convention and Republican party leaders scrambled for ways to stop him. On the Republican side, 155 delegates were at stake in Kansas, Kentucky, Louisiana, and Maine; candidates need 1,237 delegates to wrap up the nomination. Donald Trump, who began the day with 329 delegates according to the Associated Press, was looking to extend his lead over Sens. Ted Cruz and Marco Rubio, who have 231 and 110 delegates respectively. Ohio Gov. John Kasich—who has won only 25 delegates so far—has begun angling for a contested convention in Cleveland while Ben Carson all but dropped out on Wednesday.

For the Democrats, 109 delegates were up for grabs in Louisiana, Kansas, and Nebraska. Clinton headed into these states with 1,066 delegates, the Associated Press reported, nearly half of the 2,383 needed to wrap up the Democratic nomination. (Clinton’s count includes 458 superdelegates, who may vote for any candidate, as the New York Times reports.) Sen. Bernie Sanders started the day with 432 delegates and was hoping to make a strong showing in Nebraska and Kansas: The Huffington Post reported that Clinton campaign manager Robby Mook sent a memo to staffers saying Clinton could lose in those states.

We’ll be here with updates as the results come in.

UPDATE 9, March 5, 8:50 p.m. PT: Speaking to supporters in West Palm Beach, Florida, Trump called for Rubio to drop out of the race after losing all but one of the 19 Republican contests so far. “I think it’s time for Marco to clean the deck,” he said. “I would love to take on Ted one on one. That would be so much fun…That would be easy.”

After commenting that he would order military personnel to torture terror suspects and then backpedaling on Friday, telling the Wall Street Journal that he would be “bound by laws,” Trump returned Saturday to the subject of torture. “I am totally in favor of waterboarding, and if we can, I’d like to do much more than that,” he said. “I will try to get the laws extended, broadened…so we can better compete with a vicious group of animals.”

One journalist brought up Thursday’s Fox News debate, in which Rubio made a jab at Trump’s “small hands”—and Trump reassured voters that “there’s no problem.”

“Marco just made it up, because he’s a politician, and politicians lie,” Trump said Saturday night. For those worried about the tone of a presidential campaign in which the front-runner reassured voters about the size of his manhood, Trump also had an answer: “I will be the most presidential candidate in history.”

UPDATE 8, March 5, 7:55 p.m. PT: The final race of the night has wrapped up. Trump won Kentucky with 35.1 percent of the vote, followed closely by Cruz with 31.4 percent, networks are reporting. Eighty-four percent of results have been counted.

UPDATE 7, March 5, 7:07 p.m. PT:  Sanders, who tonight adds victories in Kansas and Nebraska to his wins in Colorado, Minnesota, New Hampshire, and Oklahoma, told the Associated Press that his campaign is bearing out its promise of a “political revolution.” In the coming months, Democratic candidates will turn their sights on New York, California, Oregon and Washington state. “I think in all of those states, we’ve got a shot to win it,” Sanders said, adding that wins in those states could convince some of Clinton’s superdelegates to switch their allegiance to his campaign.

UPDATE 5, March 5: 6:23 p.m. PT: Networks quickly projected a Clinton win after polls closed in Louisiana, which, with its prize of 51 delegates, is the most important Democratic contest of the night. With just 8 percent of results in, Clinton had won 71.1 percent of the vote. Sanders trailed at 21.4 percent.

UPDATE 4, March 5: 6:10 p.m. PT: Sanders appears to be edging out Clinton in Nebraska, earning 54.8 percent of the Democratic vote to Clinton’s 45.2 percent, announced Vince Powers, the state Democratic Party chair. Seventy-five percent of polling locations are reporting, and the results are not final yet, Powers said.

UPDATE 3, March 5, 5:55 p.m. PT: Cruz picked up his second win of the night, earning 45.8 percent of the vote and 12 delegates in Maine, state GOP party chairman Rick Bennett announced in a speech in Lewiston, Maine. In second, Trump gained nine delegates and 32.5 percent of the vote, while Kasich picked up two delegates and 12.2 percent. Rubio failed to gain any delegates in the state, trailing at just 8 percent in the polls.

UPDATE 2, March 5, 5:30 p.m. PT: The Kansas Democratic Party has called Kansas for Sanders, with 90 percent of the vote in, CNN is reporting.

UPDATE 1, March 5, 2:45 p.m. PT: With just more than half the vote in, the Associated Press has called Kansas for Cruz, with 51 percent of the vote. Forty delegates are up for grabs in the state.