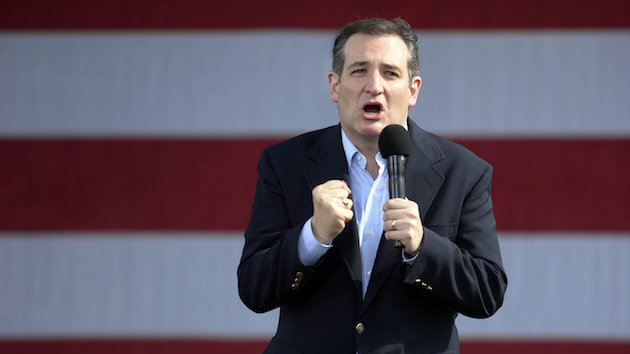 In his daily Playbook newsletter, Politico‘s Mike Allen reported today that “on the eve of the Wisconsin primaries, top Republicans are becoming increasingly vocal about their long-held belief that Speaker Paul Ryan will wind up as the nominee, perhaps on the fourth ballot at a chaotic Cleveland convention.”

But Ted Cruz, campaigning in Wisconsin ahead of Tuesday’s primary, says that if the Republican Party establishment were to anoint a candidate other than the two leaders in primary and caucus voting—Cruz and Donald Trump—at the party convention this summer, the GOP base would “quite rightly revolt.”

Talking with reporters in the basement of a Masonic Center in Madison, Wisconsin, shortly before recording a town hall with Fox News in the auditorium upstairs, Cruz dismissed the concept of a new candidate like Ryan entering the fray. Currently, the Republican National Convention’s Rule 40 mandates that a candidate must win a majority of the vote in at least eight states in order to get his or her name nominated at the convention, effectively preventing anyone other than Trump or Cruz from being placed in contention. Cruz rejected any suggestion that the convention would scrap Rule 40, as has been widely speculated.

“There are only two candidates whose names will appear on the ballot: Donald Trump and myself,” Cruz said. While Cruz and Trump aren’t on friendly terms these days, Cruz said they are united in wanting to keep the rules consistent. “Both Donald and I have been very clear,” Cruz said. “We shouldn’t be changing the rules because Washington is unhappy with how the people are voting.”

He added, “The rules are the rules.”

Still, should party leaders attempt to nominate a third candidate, Cruz painted a dark vision for how that would go down. “This fevered pipe dream of Washington, that at the convention they would parachute in some white knight who will save the Washington establishment, it is nothing less than a pipe dream,” Cruz said. “It ain’t gonna happen. If it did happen, the people would quite rightly revolt.”

Cruz’s concept of a revolt sounds far more peaceable than the rioting Trump has envisioned if he wins the voting but loses at the convention. Cruz said that if a convention selects a third candidate, “the voters would naturally say, ‘To heck with you, we’re staying home.'”