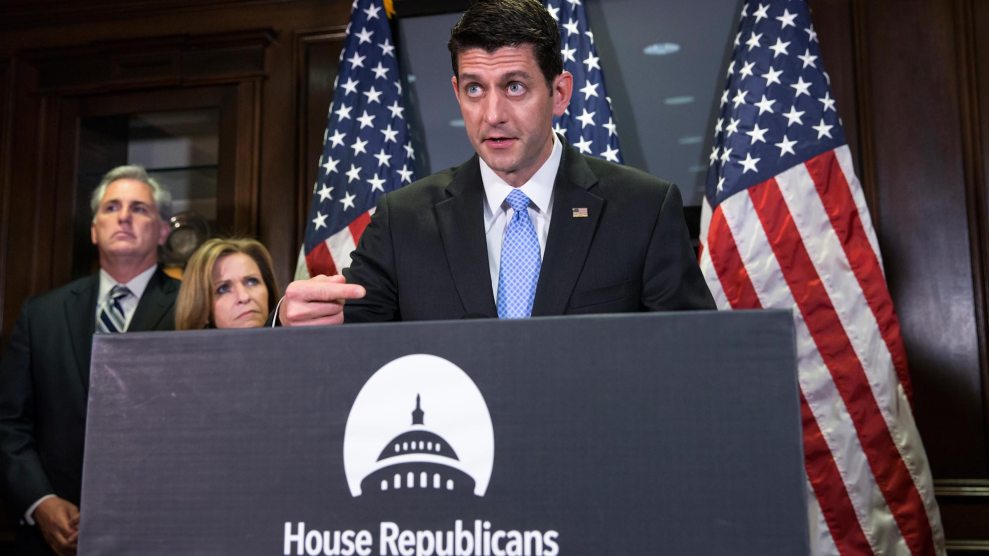 In one of his final acts as speaker of the House last October, John Boehner helped form the Select Investigative Panel on Infant Lives to explore allegations that abortion clinics are illegally selling fetal tissue for a profit. On Tuesday, 181 House Democrats sent a letter to Boehner’s successor, Paul Ryan, asking him to break from his fellow Republicans and demand an end to an investigation that the panel’s Democratic members have called, at various points, a “farce,” “witch hunt,” “kangaroo court,” and something that “belongs in a bad episode of House of Cards.”

“To this day, the panel still lacks credible evidence to support its case that any federal laws were broken,” the Democrats wrote to Ryan. “Yet the Chair and majority staff continue to harass individuals, researchers, clinics, and health care facilities…The onus is on you to put an end to this witch hunt. You cannot continue to turn a blind eye to the serious risks presented by the Panel and still claim to fulfill your responsibilities as Speaker.”

Since its creation, the investigative panel has held two public hearings, and at each one the Democrats repeatedly accused the Republican members of violating House rules. At the first, Rep. Jerrold Nadler (D-N.Y.) asked the panel’s chair, Rep. Marsha Blackburn (R-Tenn.), to explain why she had issued wide-ranging subpoenas for the names of researchers, grad students, lab technicians, and others who were involved in fetal tissue research—a move that abortion advocates worried could endanger the lives of these scientists and their employees. Blackburn declined to elaborate. At the second hearing, in April, Blackburn repeatedly refused to provide clear sources for a set of provocative exhibits that included a draft contract between a procurement company and an abortion clinic and several charts implying the growing profitability of fetal tissue procurement. She said only that these items came from the “investigatory work” of the panel.

The panel has also cited as evidence widely discredited material from the Center for Medical Progress, the anti-abortion group established by activist David Daleiden, who was recently indicted by a Texas grand jury for his work on secretly recorded and deceptively edited anti-Planned Parenthood videos released last summer.

This is the fifth letter from Democrats to Ryan in recent months about the panel, airing concerns about the panel’s investigative practices or asking that it be disbanded entirely. Each of those letters, they wrote, “has been met with silence.” Three of the previous letters were signed only by the six Democratic members who sit on the select investigative panel; the fourth was signed by 98 House Democrats. This time, the Democrats have upped the ante, getting 181 of 188 House Democrats to sign on to Tuesday’s letter, and requesting a response from Ryan in writing.

Earlier this month, the Democratic members of the panel held a press conference with House Minority Leader Nancy Pelosi to draw attention to their concerns. Pelosi referred to the panel as “the Committee to Attack Women’s Health” and accused it of “abuses that have not been seen on Capitol Hill since the days of Joseph McCarthy.”

Pelosi and other Democrats highlighted issues that were laid out in a May 12 letter to Ryan, written by the Democratic members of the select panel. They wrote that the committee’s process for issuing subpoenas to fetal tissue researchers and abortion rights advocates—one of the most aggressive investigative tactics available to Congress—has been deceptive. In early May, for example, the panel issued 19 subpoenas; 17 of those were sent to individuals or groups who had never been asked to comply voluntarily. The other two recipients had already responded to a previous information request and hadn’t been informed of any noncompliance. The preemptive subpoenas have allowed Blackburn to make “false public claims” of mass disobedience by researchers and imply that abortion rights advocates have something to hide, the Democratic representatives wrote.

The Democratic members have also repeatedly said the panel’s aggressive investigative tactics put fetal tissue researchers and abortion providers at grave risk. “The danger posed by the Panel is real and serious,” they wrote yesterday. “There is a long and undeniable history of violence against women’s health care clinics, physicians, and patients.” They cited the November 2015 shooting at a Planned Parenthood clinic in Colorado, where a gunman killed three people and injured nine. They also said the panel disregarded the safety of an abortion provider when it published a press release on May 11 naming him as a “late-term abortionist” who is under investigation by the committee. The doctor has long been a target of threats and attacks, including a 1991 fire that destroyed his family farm and much of its livestock. “These recent steps are completely outside the bounds of acceptable Congressional behavior,” wrote the House Democrats.

The Democratic members of the committee believe the panel’s disregard for safety is one-sided, given that it has a whistleblower portal on its website promising confidentiality to anyone looking to provide information. “Apparently, Republicans are willing to protect individuals who provide information that might support their preferred partisan narratives, but are denying this same protection to individuals who perform life-saving research and health care,” wrote the members in their May 12 letter.