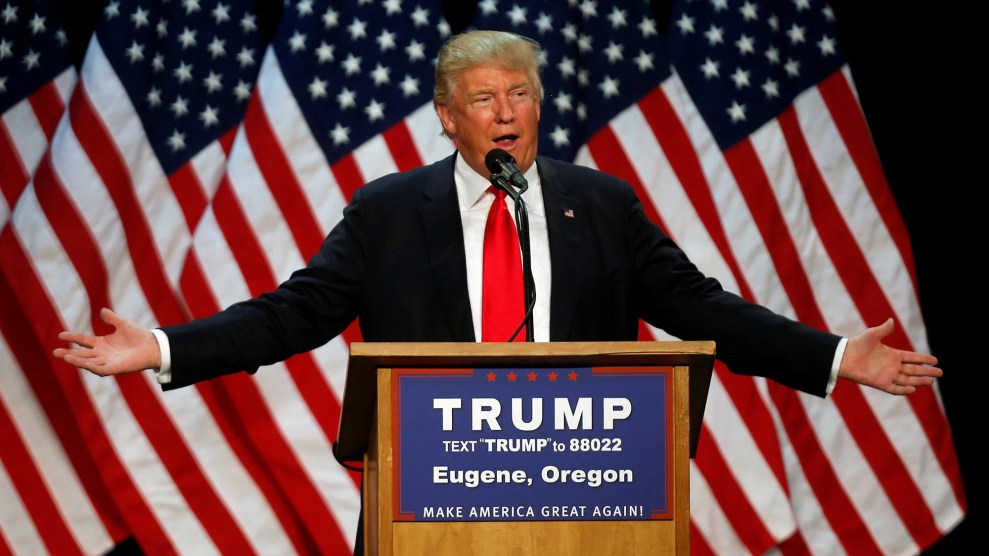 As Donald Trump’s path to the Republican presidential nomination seems increasingly inevitable, his conservative opponents in the #NeverTrump movement have begun to hatch radical backup plans to deny him the presidency without putting a Democrat in the White House. One Hail Mary strategy they’ve discussed involves recruiting prominent third-party candidates to run in individual states where they’re popular in order to bolster down-ballot Republicans and possibly even throw the presidential race to the House of Representatives.

After Trump won last week’s Indiana primary and his remaining rivals dropped out of the race, Republicans still refusing to support him sought an alternative strategy to beating him at the polls or the Republican National Convention in July. Weekly Standard editor Bill Kristol has been trying to woo Mitt Romney to run as a third-party candidate—or if not Romney, pretty much any other mainstream Republican willing to mount a national campaign.

Republican strategist Liz Mair, who has become one of the public faces of the anti-Trump crowd, tells Mother Jones that she’s been having conversations with other leading conservatives opposed to Trump about a variety of backup options since Trump’s last remaining rivals, Ted Cruz and John Kasich, dropped out of the race last week. One option, should they fail to recruit a viable candidate to run nationwide, is to get conservative candidates to run independent, single-state bids in as many states as possible.

Mair declined to specify which anti-Trump conservatives were most inclined toward this plan, but she mentioned several potential candidates. While Romney seems unlikely to launch a nationwide presidential bid, perhaps conservatives could convince him to put his name on the ballot in Utah, where he’s popular due to his family roots there and his Mormon faith. Or Scott Walker could run just in Wisconsin, Mair suggests, or Rick Perry in Texas (although Perry endorsed Trump last week). Even non-politicians, she believes, would be better than Trump. “If we’re going to be in the era of celebrities, we could get Clint Eastwood or Kurt Russell,” Mair says.

If these one-off candidates could pick off a few key swing states, that might be enough to deny both Trump and the Democratic candidate (likely Hillary Clinton) an Electoral College majority. In that case, the president would be selected by the Republican-controlled House of Representatives, which presumably would be more inclined to hand the job to a traditional Republican than face four years of working with Trump.

The odds are not in favor of that outcome—not to mention the popular upheaval that might follow if this kind of scenario came to pass. But the strategy could accomplish a more modest goal. A popular name at the top of the ballot in certain states could give anti-Trump Republicans who were thinking of sitting out the election a reason to go to the polls and vote for other Republicans on the ballot. “The main logic behind that, from what I can glean,” Mair says, “is that people are really worried about down-ballot in that situation.”

It might sound like a long-shot strategy and a thankless task for the candidates who would volunteer to run for president with next to no chance of actually entering the White House. But Mair—who said her initial reaction to conservatives pushing an independent candidate was that “they were fucking nuts”—has become increasingly convinced that it might be a plausible way to help keep Trump from dragging down Republican candidates for other offices in November. “I do think that option overall is a lot more viable than people are giving it credit for,” she says.

Mair mentioned this strategy among a long list of possible routes that the diaspora of disaffected Republicans has been discussing as alternatives to backing Trump. She’s still not sure what approach she would prefer, and she even pondered whether she’d write herself in on the presidential line come November. One more plausible option is uniting behind former New Mexico Gov. Gary Johnson if he ends up winning the Libertarian Party nomination, as he did in 2012. “He could run a substantially stronger campaign than he did last time,” Mair says. He’s not the ideal candidate, but his economically conservative record as governor could pull away some traditional Republicans. “My priority is much more voting and keeping my conscience clear,” says Mair.

Trump’s conservative opponents aren’t quite ready to concede that he’s got the nomination locked up, and they’re holding out hope—at least publicly—that there’s a path to derailing him at the convention. “I think people recognize that it’s going to take something extraordinary and out of kilter with what we normally do in politics,” Mair says. She wouldn’t name names but said there were a host of Republicans with “clout” planning to work behind the scenes to sway delegates between now and July. The hope is that there are enough Cruz delegates who would be willing to do anything to muck up the rules in order to block Trump in Cleveland. “There’s probably nobody in the world who hates Donald Trump more than the world of Ted Cruz supporters,” Mair says.

Our Principles PAC, the most active Trump opposition group, has spent $17 million opposing Trump thanks largely to a large donation from Marlene Ricketts, whose family owns the Chicago Cubs. The group is refusing to admit defeat just yet. Its founder, former Romney deputy campaign manager Katie Packer, pushed back vigorously last week when ABC reported that Our Principles PAC would be shutting down.

“We are looking at various options as to how we could impact the race going forward and haven’t come to any decisions,” Tim Miller, a senior adviser to the group, said in an email late last week. “Until Trump has 1237 [delegates, we] will still oppose his nomination, TBD how we operationalize after.”