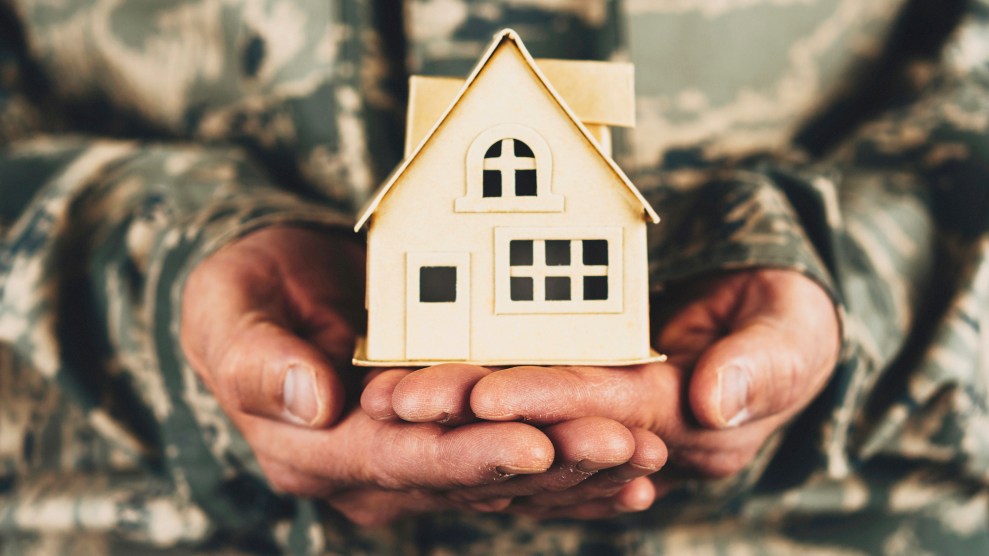 Over the objections of the Pentagon, the Senate passed a military budget in mid-June that changes the housing allowances given to soldiers, denying them a widespread source of supplemental income.

Service members who don’t live in barracks receive a monthly stipend called Basic Allowance for Housing (BAH). Right now, it’s a simple, flat-rate (and tax-free) cash payment that’s handed out according to soldiers’ rank, the cost of housing where they live, and whether or not they have dependents. Under current rules, service members are free to rent cheap apartments and pocket the leftover cash, or they can share housing while each getting a full allowance—a popular way for single soldiers and “dual military” couples to offset low military pay. The stipends range from a little over $600 a month for an unmarried private to more than $5,000 a month for a high-ranking officer with dependents.

The measure in the Senate bill, which passed with approval from the Armed Services Committee, would make the housing stipend cover only soldiers’ actual bills. (The committee did not respond to requests for comment about which members specifically backed the housing changes.) Soldiers would provide copies of their rents or mortgages and get reimbursed only for what they spent, up to a maximum payable limit. Soldiers sharing housing would have their allowances divided by the number of service members sharing the space. The changes would cost many soldiers hundreds of dollars of a month. The Congressional Budget Office estimates the move would save $2 billion over the next five years.

“This seems like a very odd thing to go after, just because it’s such a drop in the bucket in the overall big scheme of things,” says Dan Grazier, a fellow at the Project on Government Oversight, a government watchdog group. The Senate’s overall bill calls for $602 billion in Pentagon spending for the next fiscal year alone. A Pentagon report issued in March said it was “inappropriate to limit a member’s compensation by tying that compensation to actual expenses,” according to the Military Times.

If the Defense Department is looking for meaningful savings, says Todd Harrison, the director of defense budget analysis at the Center for Strategic and International Studies, it needs to focus on something other than cutting housing stipends. “It’s not nothing, [but] it’s not the kind of reform that’s going to put the military compensation system on a more sustainable trajectory,” he says. Harrison argues that Congress should look to make changes to retirement benefits or to Tricare, the military health care system, whose costs are growing faster than any other area of the Pentagon budget. In fact, Harrison says, past change have already produced far bigger savings without taking money out of the pockets of soldiers.

“Just the minor changes that Congress has made to the Tricare program over the past four or five years [are] now saving more than $5 billion a year—each year—in the defense budget,” he says, “and I think a lot of people would be hard-pressed to identify what those changes are.”

Harrison’s research also says housing allowances are more important to soldiers than benefits such as health care. “It kind of baffles me,” he says. “They’re cutting back on exactly the types of compensation that people value most [and] ignoring the elephant in the room.”

While Harrison believes there’s still “a lot more that could be done” to find savings in retirement and health programs, others disagree. “Any low-hanging fruit has gone away, at the very least,” says Katherine Blakeley, a research fellow at the Center for Strategic and Budgetary Assessments, a defense think tank.

Blakeley points out that housing allowances were never intended to simply be bonus cash for troops, even if many soldiers now use them that way. BAH was originally intended to cover only about 80 percent of a soldier’s housing costs, she said—it’s now designed to cover 99 percent—and the Senate’s changes are an attempt to make such stipends “a little more true to what their purposes are. If you want troops to be able to have $400 in their pocket more every month, a better way to do that is to look at the actual pay.”

For now, there’s still hope for angry troops. The House version of the defense spending bill doesn’t include any changes to BAH, and the measure will have to survive the conference committee that will hash out the bill’s final version. The Armed Services committees in both the Senate and the House did not respond to requests for comment about what might happen.