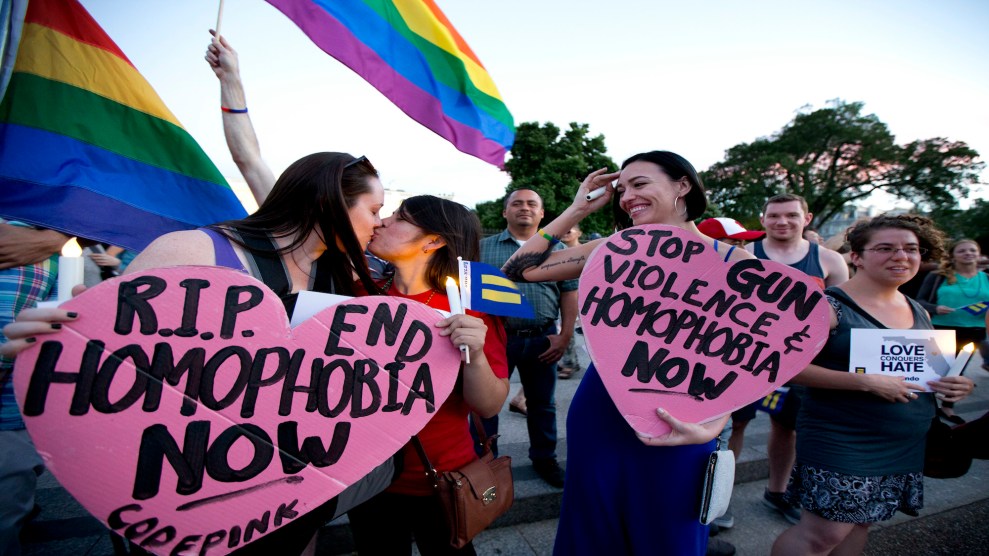 Participants in a candlelight vigil outside of the White House kiss to show their solidarity with the victims of Sunday's Orlando shooting. Manuel Balce Ceneta /AP

One day after the deadliest mass shooting in American history killed at least 50 people at a gay nightclub in Orlando, Sen. Bob Casey (D-Pa.) introduced legislation that would bar people convicted of hate crimes from purchasing or possessing firearms.

Casey announced the Hate Crimes Prevention Act at a press conference in Pittsburgh this afternoon. He indicated that Omar Mateen, the Orlando shooter, targeted people at the Pulse nightclub because of their sexual orientation. Mateen’s father has said Mateen was once angered by a public display of affection by two men.

Casey first indicated his plans for the legislation yesterday when he reacted to the Orlando shooting with a series of tweets:

Today, I’m praying for all those impacted by last night’s horrific attack on an LGBT nightclub in Orlando.

While we’re still learning about the shooter’s motivation, this is an act of terror and yet another mass shooting in our nation.

We must take every step to keep America safe, which means targeting and taking out terrorists while keeping guns out of the wrong hands.

Casey’s office also released a statement about the Orlando shooting, reiterating much of what was written in his tweets.

Casey’s comments on the Orlando shooting stand in stark contrast to those made by Republican politicians, who have focused on possible terrorist connections between Mateen and ISIS. Earlier today, President Barack Obama told reporters that there was no indication that Mateen was connected to a larger terrorist network.

The Hate Crimes Prevention Act was introduced in the House of Representatives by Rep. David Cicilline (D-R.I.) in February. The House never voted on the bill.

This post has been updated to include information about the House version of the Hate Crimes Prevention Act.