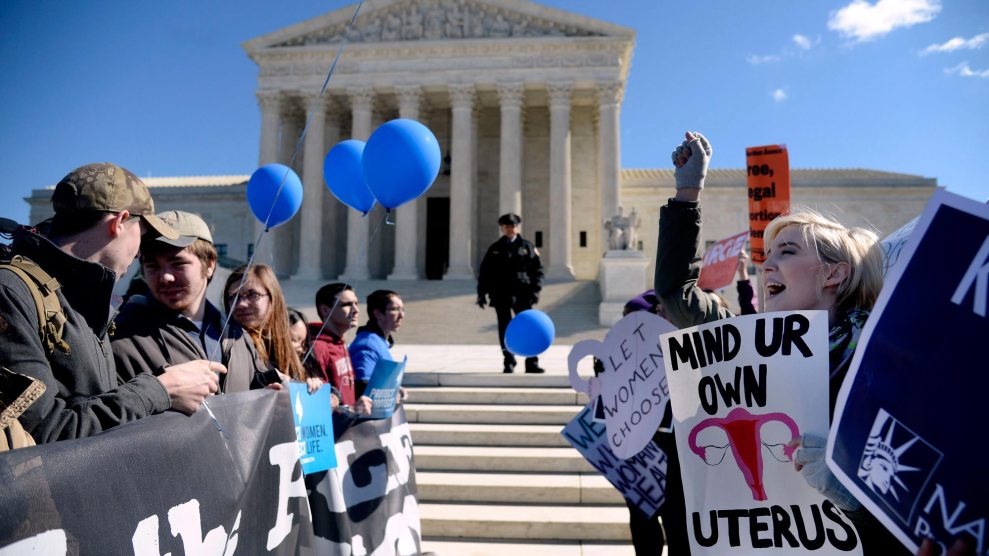 On the heels of its historic decision overturning two Texas abortion restrictions, the Supreme Court closed out its 2015 term on Tuesday with three more victories for pro-choice advocates.

The court denied review in three reproductive health appeals, leaving in place a Washington state mandate requiring pharmacies to stock and dispense contraception, and lower court decisions overturning laws in Wisconsin and Mississippi that would have required doctors who provide abortions to have local hospital admitting privileges, a rule that is often nearly impossible for abortion providers to comply with. Most hospitals require doctors to admit a monthly minimum of patients to maintain their privileges. These numbers are often unattainable for abortion clinic doctors, given that abortion is a safe procedure that rarely leads to hospitalization.

The pharmacists’ case, Stormans, Inc. v. Wiesman, presented a potential opportunity for the court to expand state-level religious freedom accommodations for companies that object to contraception. The case was being closely watched after the court punted on Zubik v. Burwell earlier this term, a case in which a group of religious employers objected to the opt-out process for contraceptive coverage set out in Obamacare. The high court sent the Zubik case back down to lower cases for additional review, preserving the contraceptive mandate without addressing the larger questions about the extent of employers’ religious freedom rights.

“If this is a sign of how religious liberty claims will be treated in the years ahead,” Justice Alito wrote, “those who value religious freedom have cause for great concern.”

At the center of the pharmacists’ case were the Stormans family, which owns Ralph’s Thriftway, a grocery store with a small pharmacy, and two individual pharmacists who work elsewhere. The group filed suit against the state of Washington over a new pharmacy board rule, passed in 2007, which required pharmacies to stock and dispense contraception. The new rule, they said, violated their religious beliefs opposing the use of emergency contraceptives, which they believe act as abortifacients. (Scientific consensus is that emergency contraceptives only work before an egg is fertilized, refuting the notion that such pills cause abortions by preventing implantation of a fertilized egg.) The pharmacy board rule prohibits pharmacies from refusing to stock contraceptives due to their religious beliefs, but it does allow objecting pharmacists to ask a colleague to fill the prescription for a patient.

Justice Samuel Alito wrote a fiery dissent in response to the denial of the case, making it clear that he believes this accommodation is insufficient and should have been reviewed by the court. Joined on the dissent by Justices Roberts and Thomas, Alito called the court’s denial “an ominous sign” of the future for religious accommodation. “If this is a sign of how religious liberty claims will be treated in the years ahead,” he wrote, “those who value religious freedom have cause for great concern.”

Nevertheless, the denials were notable, as they marked a shift in the legal interpretation of abortion regulations in the wake of Whole Woman’s Health. The high court declined to hear Schimel vs. Planned Parenthood of Wisconsin, et. al. in which Planned Parenthood along with Milwaukee Women’s Medical Services, which run the only four abortion clinics in Wisconsin, sued the state in 2013 after it passed a law requiring doctors that provide abortions to have hospital admitting privileges. In 2015, the 7th Circuit Court of Appeals struck down the law as unconstitutional. Today’s rejection of Wisconsin’s appeal by the Supreme Court means that the 7th Circuit decision stands and the law is permanently struck down.

“Yesterday’s landmark ruling has already reverberated far beyond Texas, with restrictions blocked so far in Wisconsin, Alabama, Mississippi,” said Helene Krasnoff, senior director of public policy litigation and law for Planned Parenthood Federation of America, in an emailed statement. “But this is just the tip of the iceberg—advocates will be using the strong standard articulated by the Court to fight for abortion rights state by state and law by law.”

The court’s Monday ruling “gave advocates a strong way to attack laws that restrict women’s access to abortion,” says Kathryn Kolbert, the director of the Athena Center for Leadership Studies at Barnard, and the lawyer who in 1992 argued and won Planned Parenthood v. Casey, the abortion case that established the undue burden standard that the Supreme Court used on Monday to strike down Texas’ abortion restrictions as unconstitutional. “This decision said, ‘You have to look at what’s really going on here. If the purpose of a law is to keep women from getting lawful procedures, that is not going to withstand constitutional scrutiny,‘” Kolbert says. But she adds, “The history of these kinds of laws is that every time the Supreme Court rules, others keep coming back and trying new ways to restrict women’s access to abortion.”