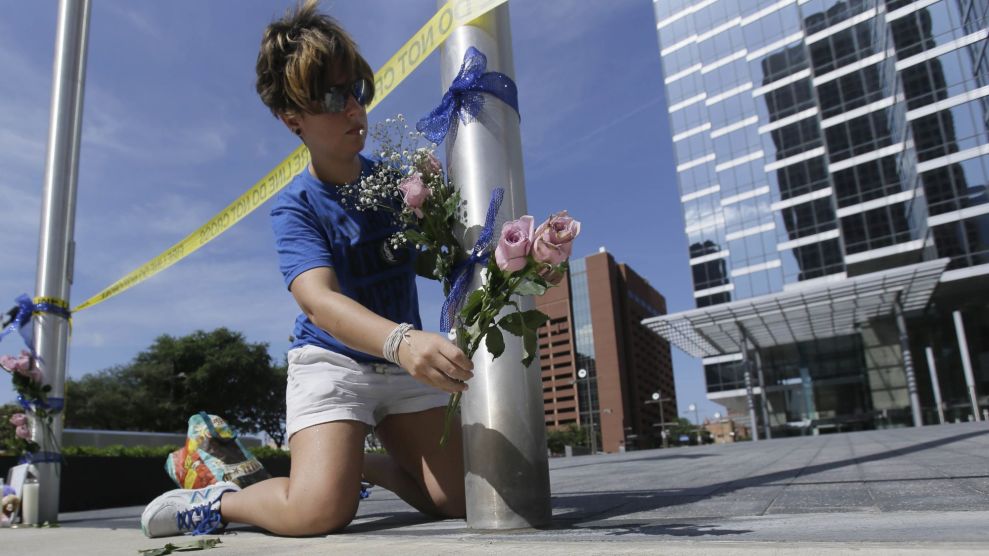 Noelle Hendrix places flowers near the scene of a shooting in downtown Dallas.LM Otero/AP

The shooting attack that killed five police officers and injured seven others in Dallas after a peaceful Black Lives Matter protest Thursday night sparked a torrent of angry recriminations from politicians and pundits on television and social media. But the tragedy also led to an outpouring of support for the Dallas Police Department, the officers who were killed, and their families.

Many protesters were quick to remind the public that the demonstration had been peaceful leading up to the attack, and that police officers and bystanders rushed to protect people throughout the chaos. People began bringing flowers to the Dallas police department the same night of the attack, and on Friday some came out in support for the slain officers, placing bouquets on top of two squad cars that had been set up as a memorial.

Here is a snapshot of how people responded to last night’s shooting:

Photo of the day: People-white and black-getting a baby stroller to safety when shooting broke out in Dallas pic.twitter.com/F5yuMRiVuZ

Lynn Mays was at the scene when the shooting started. He said an officer saved his life. pic.twitter.com/Kc4aXlg9GT

This is what is being terrorized tonight. This is what we have to preserve and continue. Not the fear. NOT the fear. pic.twitter.com/QVWyv0zjzV

Something people should understand nationally — BLM & Dallas PD have respect for each other. DPD was protecting marchers. Snipers did this.

Everyone is bearing the weight of last night’s traumatic attack. You can see it on their faces #DallasPoliceShooting pic.twitter.com/eRRLYQBl4p

Incredible turnout came in support of our officers. pic.twitter.com/ofEy7QX5k5

Powerful statement from @tingshenphoto on the striking photo he took in #Dallas pic.twitter.com/Npe6wg55kV

Thank you to the members of our community for your show of support during this difficult time. #Dallas pic.twitter.com/9E0PxnwjY2

On Friday morning, President Barack Obama condemned the attack as a “vicious, calculated, and despicable attack on law enforcement.”

“We are horrified over these events, and we stand united with the people and police department in Dallas,” he said.