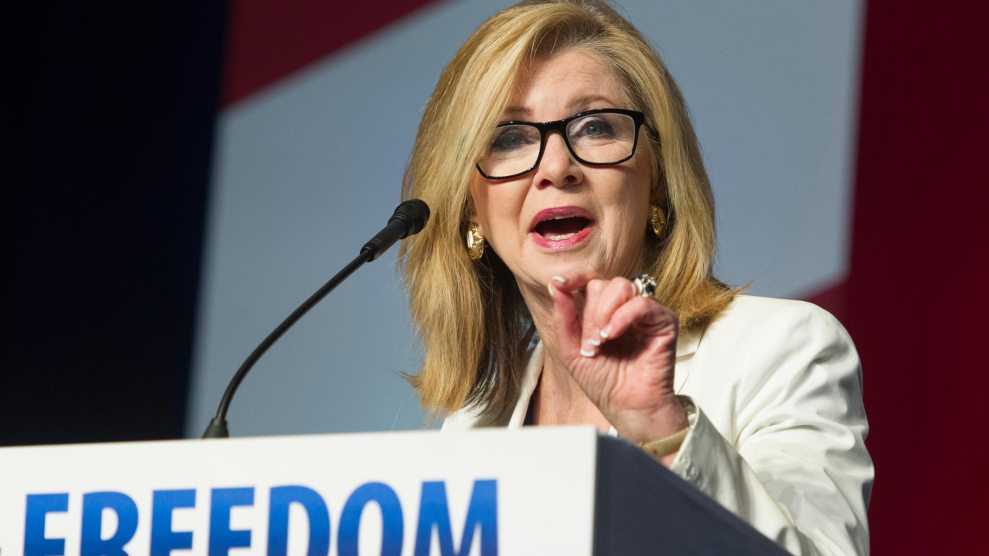 The Republican Party has saved the biggest names for last. The prime-time convention program Thursday night will culminate in Trump’s acceptance speech but will also include Ivanka, his eloquent daughter and trusted business associate; evangelical leader Jerry Falwell; and Silicon Valley tycoon and Gawker lawsuit financier Peter Thiel. Joining this all-star cast will be Rep. Marsha Blackburn of Tennessee. An experienced politician with often extremist positions on cherished conservative issues, and one of three women in the House who insist on being called “congressman,” Blackburn has become something of a Hillary Clinton antidote for the Trump campaign, and earlier this summer, it was rumored that Trump was vetting her to be his running mate.

Thursday night when @MarshaBlackburn speaks at #RNCinCLE the TN delegation will be waving these signs pic.twitter.com/Ep5zyY6Jyw

In her 14 years in the House, Blackburn—a former state senator and businesswoman—has made a name for herself by championing hot-button social-conservative causes. She’s sponsored or supported numerous anti-abortion bills, gun rights’ measures, and attempts to roll back marriage equality. She once co-sponsored a bill inspired by “birther” claims regarding President Barack Obama’s US citizenship, said Obama was a Muslim whose real religion was being concealed by the media, and described Environmental Protection Agency efforts to regulate greenhouse gases as a tax on “cow farts.” Most recently, she gained prominence for her work as the chair of a congressional committee aimed at investigating allegations of illegal fetal tissue sales by Planned Parenthood—a claim that 12 state-level and four congressional investigations have found meritless.

She once said Obama was a Muslim who’s real religion was being concealed by the media, and described EPA efforts to regulate greenhouse gases as a tax on “cow farts.”

“During her time in office, she has courageously led the fight for the unborn, cutting spending, and reducing the size of government,” said Michelle Easton, the president of the conservative Clare Boothe Luce Policy Institute, in presenting Blackburn with the group’s 2016 “Woman of the Year” award last March. “Marsha is a great role model for conservative women to look up to.”

Over the last 20 years, Blackburn has become a mainstay of Tennessee politics. After founding her county’s young Republicans’ club and then becoming chair of the county chapter of the Republican Party in the late 1980s, she was appointed by the governor in 1995 to serve as executive director of the Tennessee Film, Entertainment, and Music Commission. The commission is tasked with luring studio projects to the state, and Blackburn kept it operating well under budget. But local artists and film crews were not impressed: The number of film projects coming to the state soon dwindled, leaving many in the local film industry lacking work.

In 1998, she was elected to the Tennessee Senate and began taking on some of the key conservative issues she continues to champion today: fighting proposals to impose a state income tax, protecting gun rights, and making it harder for undocumented immigrants to get driver’s licenses—because, she told CQ, immigrants can use driver’s licenses to get social services.

During the primary of her first campaign for Congress in 2002, a writer at the Commercial Appeal in Memphis wrote of Blackburn and her opponents: “The lone woman in the pack, looks just like the guys—conservative, anti-abortion, anti-gun control, anti-estate tax, greeting voters in lawyerly clothing.” An ad touting her opposition to gun control featured Blackburn scoring a perfect 50 on a marksmanship test, with what she said was her favorite weapon, a Smith & Wesson .38.

She won the 2002 election in a landslide, and ever since, she has been a prominent advocate for guns and restrictions on immigration and abortion. During her first year on Capitol Hill, she helped lead the successful effort to pass the Partial-Birth Abortion Ban, which bans the dilation-and-extraction method of abortion after 20 weeks, after Republicans had tried for eight years to get it passed. That same year, she voted for a bill prohibiting liability lawsuits against gun manufacturers or sellers. In 2013, Blackburn argued against a proposed assault weapons ban weeks after the mass shooting at Sandy Hook Elementary School in Newtown, Connecticut. The gun control measure, she told CNN, wouldn’t help curb mass shootings because “it could be a hammer, a hatchet, a car” that a perpetrator would use instead. Over the years, her efforts have earned her an A grade and at least $18,750 in donations from the National Rifle Association.

On immigration, Blackburn authored a bill in 2007 that proposed denying undocumented immigrants access to financial services like mortgages, credit, and loans, by requiring institutions to accept only certain kinds of identification. In June, Blackburn echoed elements of Trump’s immigration and refugee agenda, telling New Hampshire TV and radio station WMUR that she supported his proposal for a temporary Muslim immigration ban. “You’ve got to know who’s coming into our country and if they’re coming here to play by the rules and abide by our laws,” she said, “or if they are coming here to do us harm.” In 2015, she proposed a bill that would temporarily halt federal funds for refugee resettlement.

In 2012, she co-chaired the committee that drafted the Republican platform and helped write an anti-LGBT GOP platform. It called Obama’s policies on same-sex marriage “a mockery of the President’s inaugural oath,” and said, “The court-ordered redefinition of marriage in several States…is an assault on the foundations of our society, challenging the institution which, for thousands of years in virtually every civilization, has been entrusted with the rearing of children and the transmission of cultural values.”

But Blackburn achieved her greatest prominence opposing abortion. Since 2003, Blackburn has co-sponsored a handful of bills aimed at stripping federal funding from groups associated with abortion, and she received awards from pro-life groups for her robust legislative work. In addition to the numerous anti-abortion measures she’s voted for, she’s also proposed ones that would defund Planned Parenthood and any other organizations that provide abortions; prohibit federal assistance for family planning groups that mention abortion; and pull federal funding from school health centers that provide information on abortion.

In January 2015, she co-sponsored a proposed ban on nearly all abortions after 20 weeks of pregnancy. Against the wishes of some anti-abortion groups, however, Blackburn supported the addition of a rape and incest exception to the bill and encouraged her fellow lawmakers to strike out a reporting requirement in cases of rape. Last September, the measure failed in the Senate, but that didn’t stop Republicans from introducing another version of it in March.

Most recently, she’s caused concern among House Democrats with her work as the chair of the panel known informally as the Select Investigative Panel on Infant Lives, tasked with investigating the allegations of illegal fetal tissue sales by Planned Parenthood. The committee has been described by several of its Democratic members as a “farce,” “kangaroo court,” and “witch hunt” in pursuit of a political agenda.

At a hearing in April, Rep. Jackie Speier (D-Calif.) said, “This hearing belongs in a bad episode of House of Cards.” House Democrats sent at least five letters to Speaker Paul Ryan asking him to disband Blackburn’s select panel. They voiced concerns about questionable sourcing for exhibits, Blackburn’s subpoena process, and Blackburn’s tactics that they felt were putting researchers and clinic staff at risk, particularly when the panel published documents on its website with the unredacted names of scientists, Planned Parenthood employees, and an abortion provider who’s previously been the victim of attacks.

Blackburn likely won’t discuss her record on issues such as abortion or guns in her speech tonight. In an interview with the Daily Caller, she said she plans to focus on unity. “Being one together—and talk about how making our country safe and our country work,” she said, “how that plays into that oneness.”