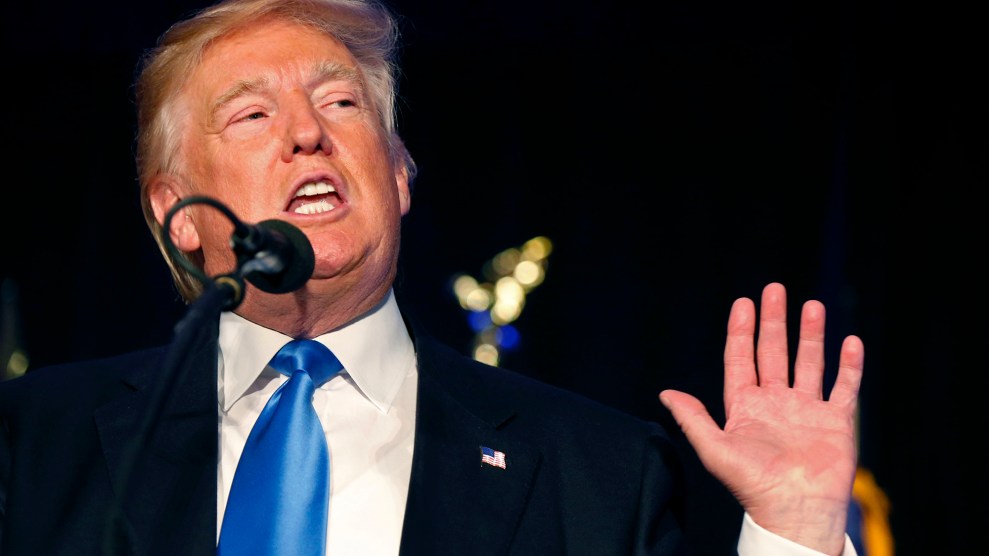 In recent days, Donald Trump, who has faced charges (even from Republicans) that he has made racist remarks during this presidential race, has mounted what his campaign considers an outreach effort toward African American voters, with Trump (while speaking to predominantly white audiences) insisting that he will do more for inner-city black Americans than Hillary Clinton and the Democrats. But the Clinton campaign has seized on this Trump move as an opportunity to make the case that Trump in the past and in the present has insulted African Americans—and to remind all voters of Trump’s controversial record on race. On Friday, the Clinton team released a new TV ad contrasting Trump’s new effort with his past history of discrimination against African Americans.

The ad begins with a clip of Trump speaking at a recent rally and presumably addressing African Americans: “What do you have to lose? You’re living in poverty, your schools are no good. You have no job.” The spot then jumps back to the 1970s when Trump and his family real estate company was sued by the Justice Department for discriminating against African Americans trying to rent apartments in their buildings. The ad returns to the present. “What the hell do you have to lose?” Trump says. The ad responds, “Everything.”

The new ad, according to the Clinton campaign, will run in Florida, North Carolina, Pennsylvania, and Ohio.

Trump is already performing very poorly among African Americans, a constituency that has heavily supported Democrats for decades. A recent poll found Trump receiving zero percent of the black vote in Ohio and Pennsylvania. Still, Clinton is trying to make sure that even a small number of  African American voters don’t fall for Trump’s new pitch—and that moderate Republican voters who might have concerns about Trump’s temperament and attitudes toward race are not swayed into accepting him. On Thursday, for instance, she gave a speech in which she pointed out the close connection between the Trump campaign and the racist “alt-right” movement. As polls show, most African Americans regard Trump as an unacceptable choice in November. But with her speech and this ad, the Clinton campaign is attempting to convince white Americans that Trump remains beyond the pale.