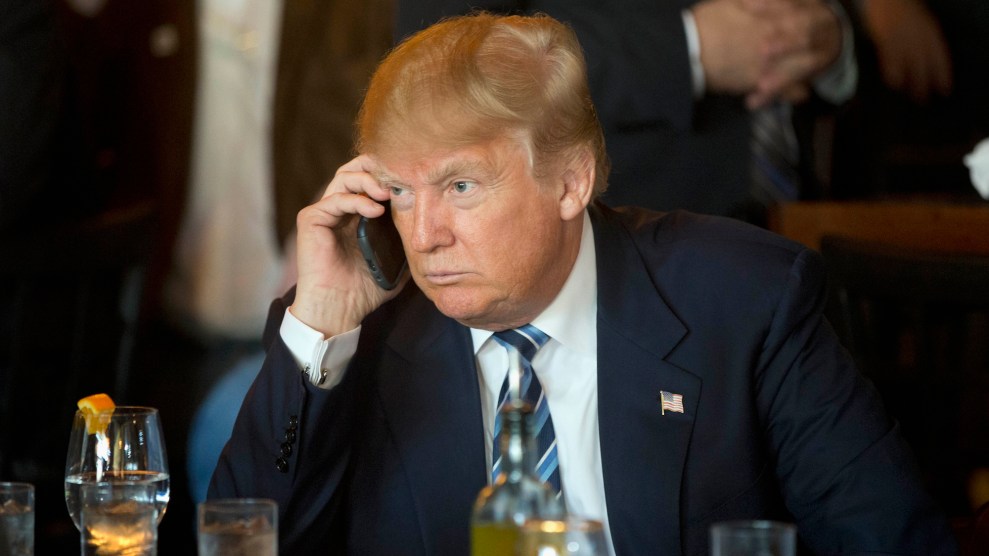 “The United States government should not spy on its own citizens. That will not happen in a Trump administration.”

The Trump campaign issued that straightforward declaration on Tuesday to Science Debate, an organization that asks the presidential candidates for their views on science-related issues. But Trump has repeatedly supported wide-ranging surveillance measures during the campaign, and there’s no evidence that he has changed his views.

Science Debate asked Trump, Hillary Clinton, Libertarian nominee Gary Johnson, and Green Party nominee Jill Stein how they would “protect vulnerable infrastructure and institutions from cyber attack, and…provide for national security while protecting personal privacy on electronic devices and the internet.” Cyberwarfare and digital security have only been mentioned infrequently during the general election, but they played a much larger role during the Republican primaries. Back then, Trump positioned himself as a surveillance hardliner willing to authorize wider spying programs on Americans, particularly Muslims.

Following the terrorist attacks in Paris in November, Trump said the government should surveil mosques and supported reinstating the New York Police Department’s “demographics unit,” which spied extensively on the city’s Muslims after 9/11. He also backed spying on mosques after the Orlando shootings in July. “We ought to start [surveillance] up again, and we ought to start it up this morning,” he told the Breitbart News Daily radio show in November. “We ought to start it up again and get going. And use your head. This is a lot of nonsense that we ended that.” The program was exposed in 2011 by the Associated Press, sparking an uproar and leading to two lawsuits against the NYPD. The police ended the program in 2014 and settled the suits earlier this year by agreeing to stronger oversight and stricter controls on surveillance practices.

Trump has also refused to rule out more restrictive measures against Muslims, including creating a database of Muslims in the United States and allowing warrantless searches against them. “Certain things will be done that we never thought would happen in this country in terms of information and learning about the enemy,” he told Yahoo News. “And so we’re going to have to do certain things that were frankly unthinkable a year ago.

But Trump was also in favor of reinstating a major mass surveillance programs that affected all Americans. In December, he told conservative radio host Hugh Hewitt that he supported reinstating provisions of the Patriot Act that allowed intelligence agencies to collect the phone records of Americans en masse. That program was ended when Congress passed the USA Freedom Act last May, which instead requires the government to get authorization from a federal judge to collect specific records.

The Trump campaign did not respond to questions about whether Trump had changed his views since the primary debates or how he defines spying on Americans.