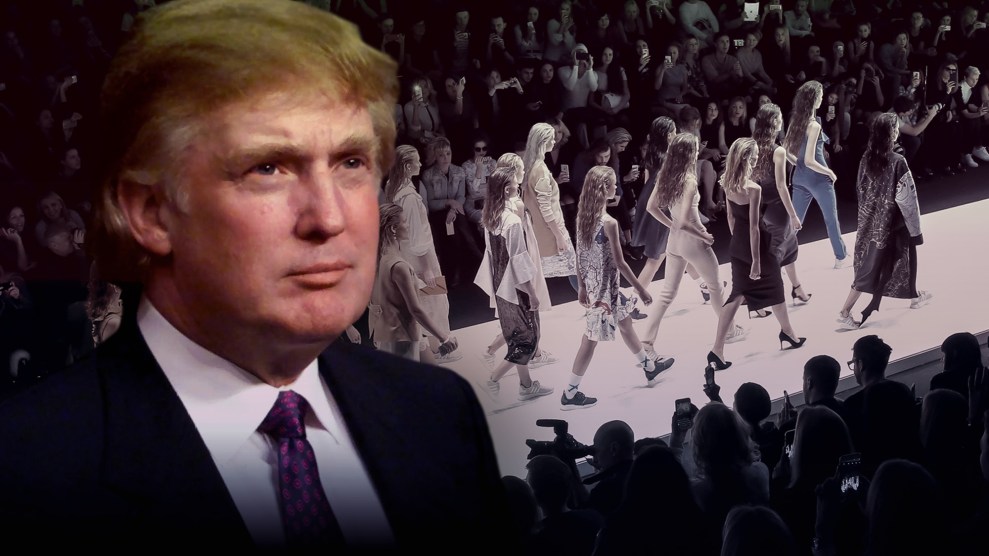 Her story adds to the accounts of three other Trump Models, first reported by Mother Jones in August, who described modeling for the GOP nominee’s agency while holding tourist visas that did not permit them to work in the United States. Those revelations prompted Sen. Barbara Boxer (D-Calif.) to call for the Department of Homeland Security and the Department of Labor to investigate the immigration and employment practices of Trump Model Management, in which Trump holds an 85 percent stake. (No action has so far been taken to investigate the company.)

“Ha! A visa? What’s that?” joked the former Trump model who Mother Jones is calling Jennifer. She requested anonymity because she fears her current work as a model will be affected.

“I worked for about four years in the US without a proper work visa,” she said. Other Trump models interviewed by Mother Jones recounted working without authorization, one for as many as six months. But the duration of time Jennifer said she worked illegally for Trump Model Management is by far the longest Mother Jones has documented.

“They sent me to LA, to Miami, everywhere. I never had a visa, and I was never going to have a visa.”

“They sent me to LA, to Miami, everywhere. I never had a visa, and I was never going to have a visa,” she said. From 2000 to 2004, when she worked for Trump’s agency, Jennifer frequently traveled between the United States and her home country, each time evading American customs officers by saying she was visiting the boyfriend she had at the time in New York. Previously, Mother Jones reported that two former Trump models were encouraged by his agency to lie to federal officials at the border and on custom’s forms about why they were coming to the United States.

Employers can risk fines and possible criminal charges for using undocumented labor. Trump Model Management and the Trump campaign did not respond to detailed questions from Mother Jones.

Like many other modeling agencies, Trump Model Management often recruited foreign models to come to New York to work on tourist visas for several months while agents assessed their long-term prospects. Only after vetting and a series of successful bookings, three former models say, would a model be offered the chance to receive a work visa, paid for by the company, and later deducted in fees from the model’s earnings. Industry experts say this practice has become less common in recent years because customs officials can quickly Google a visitor they suspect of entering to do modeling work.

But in the 1990s and 2000s, it was so commonplace in the industry for foreign models to work in the United States illegally that even Trump’s Slovenia-born wife, Melania, appears to have done so. Melania has claimed that she “correctly went through the legal process when arriving in the USA,” but the Associated Press recently reported, based on extensive documents, that in 1996 she performed 10 paid modeling gigs before she was granted a work visa. The Trump campaign did not respond to specific questions from Mother Jones about these new revelations.

Jennifer first started at Trump Model Management in 2000, the year after the agency launched with much fanfare. “I was one of the first girls to sign with Trump back then—a new face for his new business,” she said. Jennifer, who was 16 when she signed on, says she was enticed by the glamor of New York City and the attention of Trump’s agents. A Champagne-stocked limo met Jennifer and her mom at the airport for her first gig. She worked on and off for the agency until 2004. “Magazines, look-books, showrooms: I had many, many jobs around the country,” she said.

“We knew we were illegal, but we were also told that it was normal,” she said. The typical catch-22 faced by young foreign models at the time was that they needed high-profile work to convince their agencies they were good enough to stay but could only get that work from agencies unwilling to sponsor their immigration until they were tested. “We were told they were working on our visas all the time, but I never received one,” she said.

Two other former Trump models confirmed Jennifer’s story to Mother Jones. “I remember her saying she didn’t have the money for a work visa and the agency didn’t want to advance one,” said Kate, also not her real name, referring to the common practice of advancing the money for a visa with the expectation it would be paid back. (Kate spoke with Mother Jones earlier this year about her experiences working for Trump Model Management without a visa.)

“I am 100 percent sure she had no visa in 2004,” said Canadian-born Rachel Blais, another former Trump Model, who herself worked for the agency for six months without a visa; during the period before she received work authorization, she even appeared on an episode of Trump’s hit NBC reality show, The Apprentice, where she walked the runway as Trump looked on.

When she wasn’t staying with her then-boyfriend, Jennifer lived with other models in the Trump Model Management’s East Village duplex, known in the business as a “models’ apartment,” where she shared a basement bedroom packed with bunks and models from all over the world.

“It’s the worst place I’ve ever lived in my life,” she recalled. “Jails are cleaner than the Trump model apartment.” Here, like the other women Mother Jones interviewed earlier this year, Jennifer paid sky-high rent for her bunk, fees that were later subtracted from her overall pay for agency-booked gigs. Jennifer doesn’t recall the precise amount of rent she paid “but it was way too overpriced, for sure,” she said. (A detailed financial statement provided by Blais showed that Trump’s agency charged her as much as $1,600 a month for a bunk in a room she shared with five others.)

“I never made any money with Trump, not because I never worked, but because my expenses were always higher,” Jennifer said. Her description of paying exorbitant fees that swallowed up her modeling income matched claims made by other former models, including former Trump model Alexia Palmer, who filed a lawsuit against Trump’s company for fraud and wage theft in 2014. (A New York judge dismissed Palmer’s claim in March because, among other reasons, she had not taken her case first to the Department of Labor.)

“I never made any money with Trump, not because I never worked, but because my expenses were always higher.”

Trump has placed illegal immigration at the heart of his presidential campaign, vowing to build a wall along the Mexico border, deport undocumented immigrants, and crack down on visitors who overstay their visas. He has said that when any American citizen “loses their job to an illegal immigrant, the rights of that American citizen have been violated.” As he barnstormed through swing states this weekend ahead of Tuesday’s election, Trump continued to promote an anti-immigration message.  “The crime that’s been committed by these people is unbelievable,” he told an Iowa crowd, referring to undocumented immigrants.

“Oh, we will build the wall,” Trump said at a Florida rally on Saturday morning. “The harder they fight us, the higher it goes.”