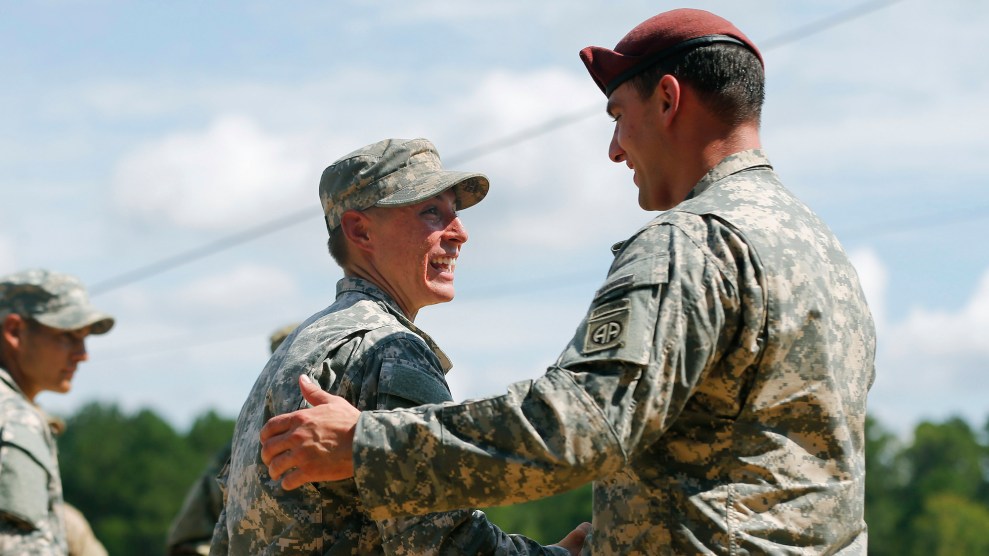 US Army First Lieutenant Shaye Haver, one of the first three women to graduate from the Army's famed Ranger SchoolJohn Bazemore/AP

At a town hall meeting held by a small veterans’ political action committee in October, a retired Army colonel named Don Bartholomew stood up to ask then-Republican nominee Donald Trump what he would do to fix what he called “the social engineering and political correctness that has been imposed upon our military.”

“The military has become an institution for social experiments and, as a result, the military has undergone a number of changes to regulations with regard to women in combat, transgender rights and other issues,” Bartholomew complained. “None of these PC actions were combat-effective or readiness-driven.” Trump strongly agreed with him. “You’re right,” he said. “We have a politically correct military, and it’s getting more and more politically correct every day…Some of the things that they’re asking you to do and be politically correct about are ridiculous.”

Since winning the presidency, Trump has yet to say much on military policy. He has picked former Marine general and military cult legend James Mattis for secretary of defense, but Mattis’ views on many issues are unknown. And comments like Bartholomew’s, along with the influence of social conservatives such as Vice President-elect Mike Pence, have those same advocates and service members worried that Trump will try to reverse Obama administration policy changes that had opened new opportunities for female and LGBT troops.

“We are are very concerned about the potential rollback for all the hard work and progress that we’ve fought for,” says Kate Germano, the COO of Service Women’s Action Network, or SWAN, an advocacy group for women in the military. The bans on women in combat and troops serving openly were dropped by the Obama administration via Defense Department policy changes. That means a new Pentagon chief can simply reverse them rather than needing to pass a new law. “I think that’s what…also has people a lot on edge, is the fact that [Trump] doesn’t really need Congress to do anything on this,” says Matt Thorn, the executive director of OutServe-SLDN, an advocacy group for LGBT service members.

Here are some of the recent changes that may be on the chopping block:

Women in combat: The Pentagon announced last December that all combat jobs in all the military’s branches would be opened to women for the first time. The Army has since trained a handful of female infantry officers and put women in the training pipeline for other combat jobs. But the change came over the objections of some members of Congress and particularly the Marine Corps, which requested an exemption to the policy. The man who did so, Marine General Joe Dunford, is now the chairman of the Joint Chiefs of Staff, and retired Marine General John Kelly, who is a candidate for secretary of state, has suggested that standards for combat troops would inevitably drop if women were allowed on the front line.

Germano points out that James Mattis, who has been chosen as defense secretary, is “a conservative, traditional senior military officer in the service that has at every turn tried to block changes that would allow women more opportunities.” While Mattis’ views aren’t known, she says she’s “concerned” he has never publicly backed allowing women in combat. He is also close to Dunford, who was Mattis’ deputy commander when Mattis commanded the 1st Marine Division during the invasion of Iraq. That combination could mean that a Marine exemption to gender integration, or a full rollback, would have powerful new support at the Pentagon.

Gay, lesbian, and transgender service: It’s been five years since gays and lesbians were first allowed to serve openly in the military, and that change now seems fairly entrenched. For example, a 2014 Military Times survey of active-duty troops showed that support for open service for gays and lesbians had reached 60 percent, up from just 35 percent in 2009. But the Defense Department only dropped the ban on transgender people serving openly in June.

Right now, says OutServe-SLDN’s Matt Thorn, there’s not enough information to tell if either change might be reversed. “He did the 60 Minutes interview where he said, ‘I’m fine with marriage equality,’ which is a two-year-old law, but then in the same breath he says, ‘I want to overturn Roe v. Wade,’ which is a 40-year-old law. So there’s just a very big lack of consistency, and I think that just has driven this uncertainty across the LGBT community.”

But Thorn also thinks appointing a former general like Mattis might work in favor of LGBT advances. “I think the thing with the generals in particular is that once policies are put in place, no matter Democratic or Republican administrations, the brass typically don’t like to roll them back because it creates an unstable environment within the rank and file,” Thorn says.

Possible sexual-assault reforms: Trump answered a question specifically about sexual assault during the Commander-in-Chief Forum, saying that he didn’t support the idea of trying military sexual-assault cases in civilian courts instead of through the military justice systems. That’s one of the key reforms proposed by Sens. Kirsten Gillibrand (D-N.Y.) and Claire McCaskill (D-Mo.), who have been pushing for several years for improvements in how the military handles sexual assault. “I don’t think it should be outside of the military,” Trump said. But he also argued that the military justice system isn’t doing enough. “Right now, part of the problem is nobody gets prosecuted…There are no consequence[s].”

Trump infamously suggested in a 2013 tweet that the thousands of unreported sexual assaults in the military and low conviction rates were inevitable in a mixed-gender military.

26,000 unreported sexual assults in the military-only 238 convictions. What did these geniuses expect when they put men & women together?

He said during the forum that the solution was not to remove women from the military, but such comments play into larger fears that many female service members have about Trump. Germano believes “women were starting to finally feel like their service was being recognized and respected,” and that that Trump’s callous comments and actions toward women may undermine that progress. A Military Times poll published this month agrees with Germano: While the survey found that 51 percent of the troops who voted backed Trump, 55 percent of women said they “worry their jobs will be adversely affected.”

“When you have someone in charge of the military who has publicly derided women, who has made comments about their looks, judges their performance based on their physical attributes, who gropes, that is of major concern because that person is ultimately setting the tone for what’s going to happen for women and men in the services,” Germano argues.

For now, all Germano, Thorn, and other advocates can do is wait for more news. “We’re all in the same position,” she says. “We’re on pins and needles waiting for decisions to be made.”