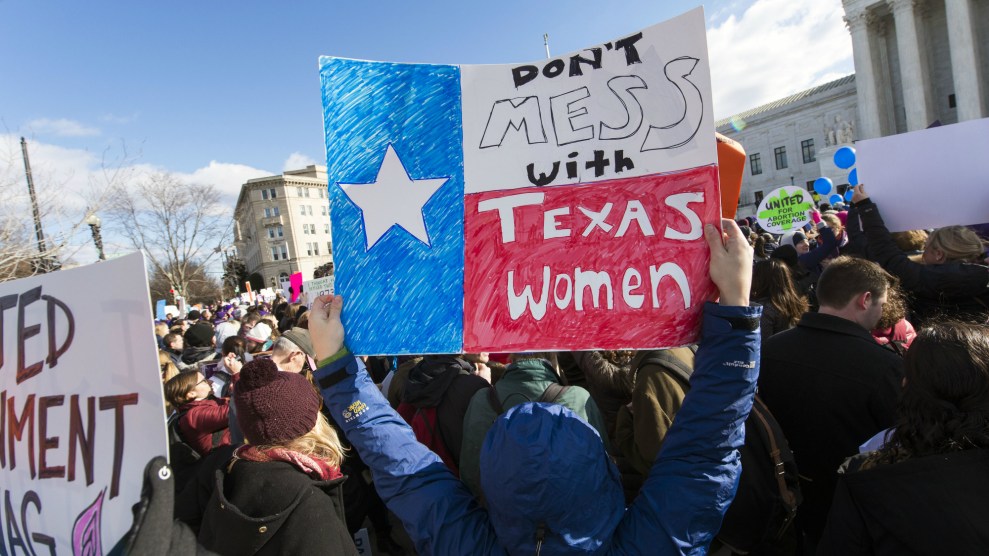 Aggressively anti-abortion policies in Texas make the state a center of controversy for those concerned with the future of reproductive rights. That trend continues this week with the release of a state-approved booklet that peddles a number of inaccurate claims about abortion, including debunked science linking abortions to cancer.

On Monday, the Texas Department of State Health Services released the latest edition of “A Woman’s Right to Know,” a guide given to women seeking abortions in Texas. The booklet is the result of a 2003 anti-abortion law that required the state to provide women seeking to terminate pregnancies with information about fetal development at least 24 hours before undergoing an abortion. The law requires that the information “be objective and nonjudgmental and be designed to convey only accurate scientific information about the unborn child at the various gestational ages.”

Similar materials are distributed in other states and often present information in ways that implicitly encourage women to carry their pregnancies to term. These guides usually make a number of claims not supported by science, such as suggesting that a fetus feels pain at 20 weeks’ gestation, or that having an abortion increases a woman’s risks of infertility, death, or suicide.

Previous versions of “A Woman’s Right to Know” have also suggested that women who give birth have a lower risk of being diagnosed with breast cancer compared with women who undergo abortions. The latest version of the booklet makes the same argument, noting that “research indicates that having an abortion will not provide you this increased protection against breast cancer.”

The claim that there is a link between abortion and breast cancer has been refuted by a number of medical organizations, including the American Cancer Society and the American College of Obstetricians and Gynecologists. But the link continues to be peddled by anti-abortion groups, including the Association of American Physicians and Surgeons, a medical group that ignores scientific information supporting vaccinations and abortion care. The group, which has published articles suggesting that Barack Obama used hypnosis to help sway voters in 2008, was a tea party favorite due to its resistance to the Affordable Care Act. Last week, Rewire reported that Rep. Tom Price (R-Ga.), Donald Trump’s pick to lead the Department of Health and Human Services, has been a member of the AAPS for several years. While Price’s stance on the link between abortions and cancer is unknown, the Georgia congressman is staunchly opposed to abortion and has denied that women might struggle to afford birth control without insurance.

The dust-up over “A Woman’s Right to Know” is only one of several ongoing reproductive rights controversies in Texas. Last week, the Texas Department of Health and Human Services approved new rules requiring abortion providers to bury or cremate all fetal remains. The rules, which were approved after several Texas abortion restrictions were struck down by the Supreme Court this summer, will likely be challenged and result in the state returning for another court battle.