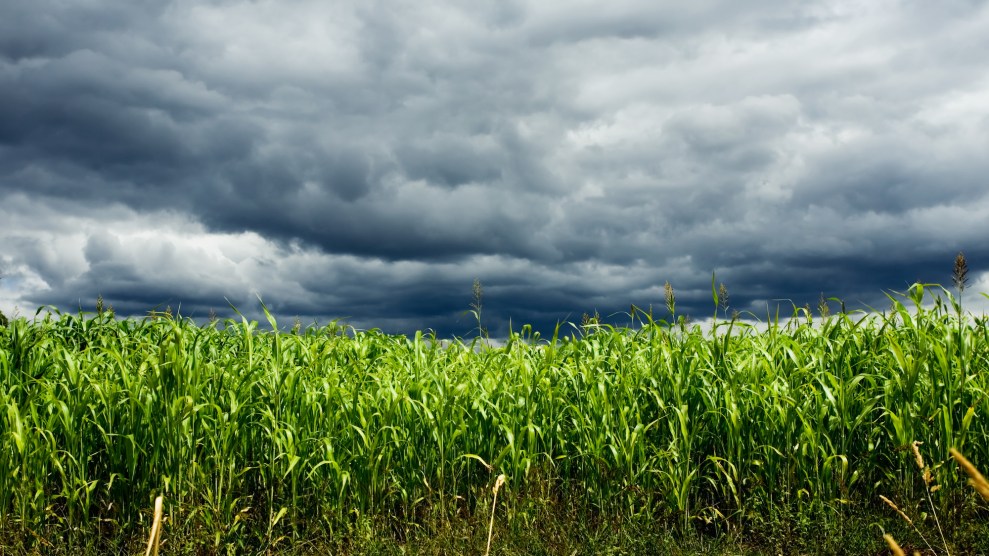 Not even sworn in yet, President-elect Donald Trump is already negotiating the terms for green-lighting what Bloomberg News calls the globe’s “biggest-ever” merger of agribusiness companies—a move antitrust experts say is highly irregular.

If Trump really does bless the merger, it would “signal a fundamental disregard for the law and for due process,” said one antitrust expert.

As I recently explained, such market power wielded by a single agribusiness company threatens to harm farmers and ultimately consumers. The executive branch is required to vet massive combinations based on such concerns under the Sherman Act. But Trump’s talks with the CEOs of Monsanto and Bayer apparently had nothing to do with the deal’s impact on competition. On Tuesday, Fox Business News recently delivered Trump’s version of how the negotiation proceeded, quoting incoming White House Press Secretary Sean Spicer from a press conference call:

After [Trump’s] meeting with Bayer and Monsanto CEOs, Bayer has committed to $8 billion in new U.S. research and development. Bayer will also keep 100% of Monsanto’s 9,000 plus U.S. workforce, and add 3,000 new U.S. high-tech jobs.

Bayer and Monsanto, for their part, issued a joint statement describing their CEOs’ “very productive meeting last week with President-Elect Trump and his team.” They made no specific pledges on jobs but did note that the “combined company expects to spend approximately $16 billion for R&D in agriculture over the next six years with at least half of this investment made in the United States,” an investment that “will create several thousand new high-tech, well-paying jobs after integration is complete.”

If Trump really does bless the merger based on a jobs pledge, dismissing antitrust concerns, it would “signal a fundamental disregard for the law and for due process,” Diana Moss, president of the American Antitrust Institute, told me. “Antitrust enforcers play the important role of referee in protecting competition and our market system,” she added. “If Trump lets this deal through without any review, it would be unusual and would raise significant concerns.”

According to Barry Lynn, director of the Open Markets at the New America and author of Cornered: The New Monopoly Capitalism and the Economics of Destruction, a combined Bayer-Monsanto would likely “pay for those jobs by ripping off American farmers, hence American eaters,” by leveraging their market power to raise prices. If the jobs deal pans out, he added, “Trump’s team is selling out the long term interests of the United States.”

And then there’s the whole question of what exactly Monsanto and Bayer are promising to deliver. As CNBC’s Meg Tirrell notes, the companies had already announced plans, way back when they agreed to merge in September, to keep the combined company’s Seeds & Traits division, as well as its main North American headquarters, in Monsanto’s hometown, St. Louis.

In that same September announcement, the two companies noted that the combined entity would maintain an annual R&D budget of 2.5 billion euros, equal to about $2.66 billion. That amounts to about $16 billion over six years—exactly what Monsanto and Bayer said to expect in its recent joint statement.

Then there’s those jobs. Recall that Trump spokesman Spicer said on the press call that the combined company had committed to “keep 100 percent of Monsanto’s 9,000-plus US. workforce and add 3,000 new US high-tech jobs.” But the joint statement from Monsanto and Bayer promised no such thing, only offering a vague reference to “several thousand new high-tech, well-paying jobs after integration is complete.”

It also bears noting that in the joint statement following the merger plan in September, Bayer and Monsanto promised their shareholders “total synergies of approximately USD 1.5 billion after year three, plus additional synergies from integrated solutions in future years.” In corporate merger speak, “synergy” means cost savings from combining operations and eliminating overlapping jobs: one of the major motivations for merging in the first place.

I asked a Monsanto spokeswoman whether the Trump team’s depiction of Bayer-Monsanto’s jobs commitment was accurate. She pointed me back to the joint Monsanto-Bayer statement and declined to comment further.