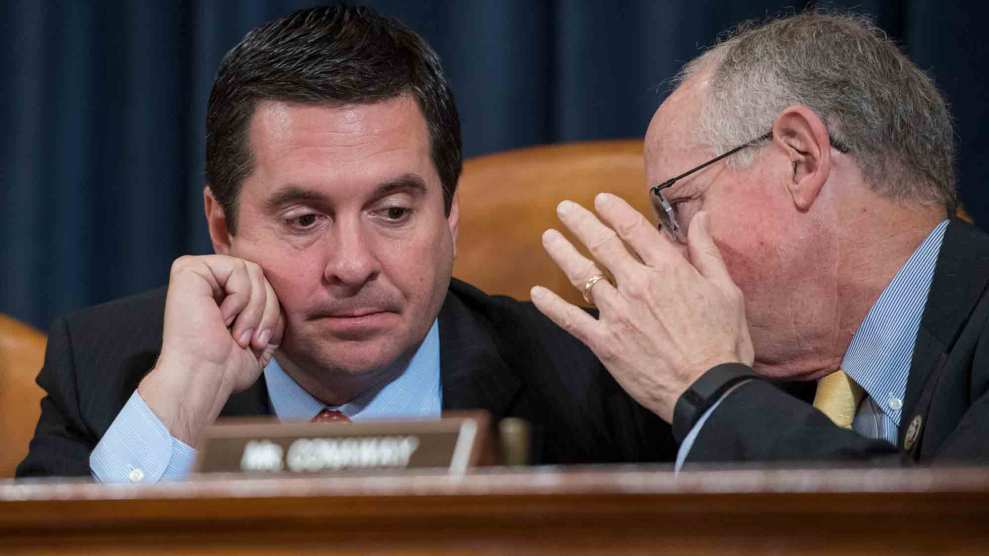 There were many intriguing and surprising moments at the House intelligence committee’s hearing on Monday on Russia’s election season hacks. FBI Director James Comey exploded not one but two bombshells, noting that there was no evidence to back up President Donald Trump’s claim that he had been wiretapped last year by President Barack Obama and revealing for the first time that the FBI has been conducting a counterintelligence investigation since last July of contacts between Trump associates and Russia. Meanwhile, the Republicans on the committee ignored both of these matters—and the overarching issue of Moscow waging political warfare against the United States—and instead fixated on one thing: the leak that revealed that recently ousted national security adviser Michael Flynn had apparently lied to Vice President Mike Pence about his transition-period chats with Russian Ambassador Sergey Kislyak. Yes, the GOPers were more outraged about an unauthorized release of classified information showing that a top White House aide had deceived the veep than about Vladimir Putin mounting a covert operation against the United States to help Trump become president.

After the hearings, Rep. Devin Nunes (R-Calif.), the chair of the committee, sort of shrugged when asked why the Republicans had zeroed in on this leak and said almost nothing about Putin’s assault on American democracy. Maybe it was “overemphasized,” he said. But he contended the Flynn leak was the only crime involved in this widening scandal. When a reporter noted that hacking a political party, stealing its documents, and leaking them would qualify as a crime, Nunes grinned and said: maybe it was, but that was done by a foreign actor.

When I asked Nunes whether he agreed with Trump’s recent tweet that the “Russia story” was “fake news” cooked up by Democrats, he wouldn’t provide a straight answer. What part of the Russia story was Trump referring to? he asked. I countered: Is this all made up by Democrats? Nunes replied that he didn’t know. He was, though, quick to say he has seen no evidence of any coordination between the Trump camp and the Russians during the campaign. But, as another reporter pointed out, the committee has just started its investigation. Oh yeah, Nunes said.

Nunes just told me he’s never heard of Carter Page or Roger Stone. And he’s in charge of the investigation?

Reporters were shaking their heads. It seemed that Nunes didn’t care that much about the hacking and didn’t realize the hearing had produced historic revelations.

Then came perhaps the weirdest moment of all. Asked whether the committee would investigate the Trump associates mentioned by Democrats during the hearing, Nunes went on about all the “names” the Democrats had mentioned. He remarked that the committee couldn’t base its investigations on media reports. He said he didn’t bother to read all the stories out there and didn’t even recognize the “names” the Democrats had tossed out.

“Really?” I asked, noting the Democrats had referred to only about five Trump associates. Oh, Nunes, said, there was much more than that. And, he reiterated that he was unfamiliar with the people who had been brought up. What about Carter Page or Roger Stone? I asked, referring to two Trump associates raised by the Democrats. (Trump identified Page during the election as a foreign policy adviser, and Page met with Russians during the campaign. Stone, a longtime Trump adviser and self-proclaimed dirty trickster, was in contact with Guccifer 2.0 and WikiLeaks, entities that released emails stolen by the Russians from the Democratic Party and John Podesta, the Clinton campaign’s chairman.)

Nunes told me he didn’t know who they were. Huh? Page and Stone—key players in the Trump-Russia scandal who appeared in many media accounts—you don’t know who they are? No, he said. Other reporters shook their heads in disbelief. Nunes was either lying or displaying reckless ignorance.

This is the guy in charge of one of the two congressional investigations probing the Trump-Russia scandal. His staff might want to send him a few clips.