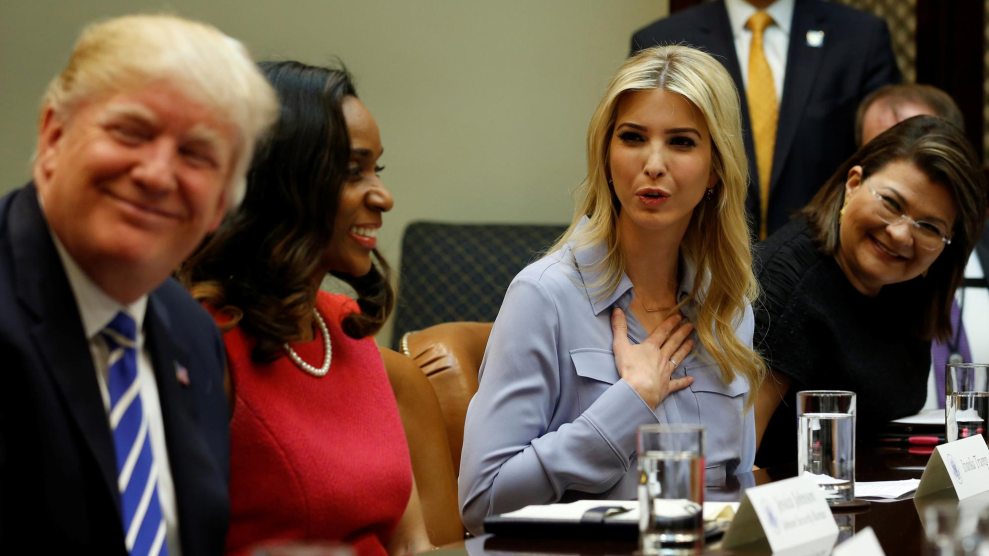 Last week, Trump revoked this order, leaving workers at thousands of companies much more vulnerable to a host of abuses from their employers—and undoing protections meant to create more equitable workplaces for women.

“We have an executive order that essentially forces women to pay to keep companies in business that discriminate against them—with their own tax dollars,” Noreen Farrell, the director of Equal Rights Advocates, told NBC. “It’s an outrage.”

One provision of the now-revoked order required paycheck transparency by companies holding federal contracts, in which they had to provide all employees with detailed statements of their hours and compensation—a measure that’s particularly important for protecting workers against wage theft. A second provision that was jettisoned banned the use of forced arbitration clauses by federal contractors in handling sexual harassment or discrimination claims in their workplaces. These types of clauses—which require allegations to be settled privately outside of court in usually secret proceedings—are a way for companies to preemptively keep sexual harassment allegations out of the public eye.

Trump’s order also revokes the requirement that companies seeking federal contracts disclose three year’s worth of violations of the Equal Employment Opportunity executive order, first signed in 1965 by President Lyndon Johnson and since amended to include protections surrounding gender. The order now states that companies with federal contracts “will not discriminate against any employee or applicant for employment because of race, color, religion, sex, sexual orientation, gender identity, or national origin.”

Nor will companies bidding on federal contracts be required to reveal their last three year’s worth of violations of the Family and Medical Leave Act, which requires that many companies provide 12 weeks of unpaid leave to new parents.

The day before President Trump signed this order, it was reported that his daughter Ivanka—who has regularly spoken about her father’s plans to improve protections for working moms, and who is currently pushing a child care tax credit as part of the administration’s upcoming tax reform initiative—would represent the United States at an upcoming women’s empowerment summit in Berlin. Here is her tweet:

Looking forward to promoting the role of women in the economy and the future of our workforce globally #W20 https://t.co/1OB9TK6poH