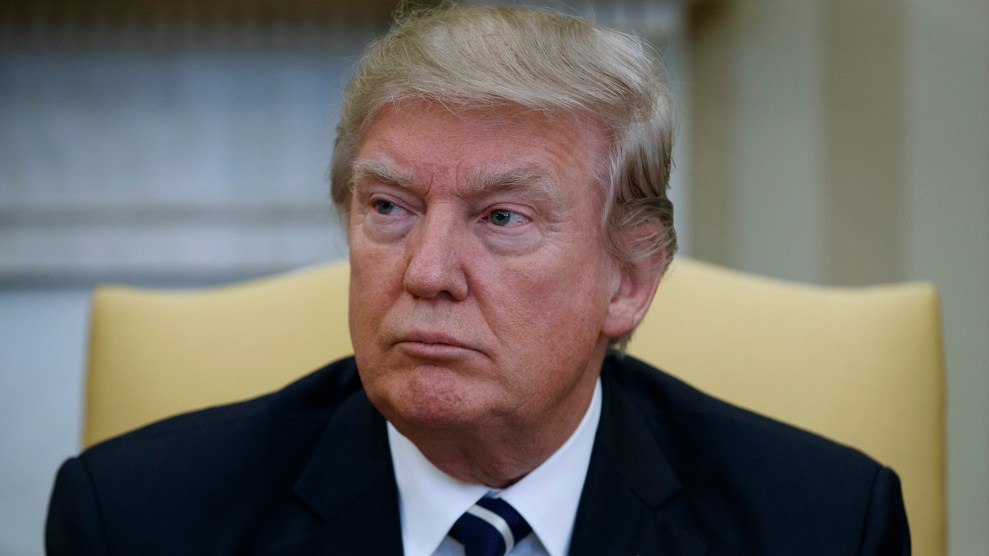 Here are two statements President Donald Trump has never made:

Trump could have made either statement early in his administration. Instead, he seems almost afraid of the facts that an independent investigation might reveal. At every turn, the administration’s first reaction to charges that his team colluded with the Russians has been to deny everything, try to limit a full investigation, change the subject, or attack the information source. Trump constantly pushes back against any line of inquiry that suggests there may indeed have been something more than above-board communications with Russians leading up to Election Day. “Trump Russia story is a hoax,” the president tweeted again last week.

Congress could help clear the air with its own investigations, given the seriousness of this issue. Even former Republican Vice President Dick Cheney has compared Russia’s cyber-meddling in the presidential election to an “act of war” against the United States.

The House Intelligence Committee inquiry is led by California Republican Devin Nunes, who comes across more like a White House defense attorney than an independent investigator. Nunes, a former Trump transition team player, seems to be doing the administration’s bidding with his bumbling on-again, off-again investigative efforts. The Senate Intelligence Committee began its hearings last week, and it at least seems more interested in doing its job to tell the public what happened in the election and whether there was contact between Trump’s team and Russia.

Once confronted with the fact that Trump aides were indeed in contact with the Russians, the administration has often sought to downplay their role. For example, White House press secretary Sean Spicer said former campaign chairman Paul Manafort played only a “limited role for a very limited time” in the Trump campaign.

Whenever reputable news organizations report on this issue, they are routinely labeled “fake news.” When intelligence agencies discuss their findings on Russian interference in the election, Trump says leaks are the problem.

And finally, there is the money trail. Perhaps most tellingly, Trump has never been willing to release his taxes or other financial information that would show whether or not he’s received loans or other investments from Russian oligarchs. This information could provide proof, if there is any, that Trump is not beholden to Moscow’s money. But Trump has kept this information under tight wraps.

To date, no Trump official has given credible explanations for what we already know occurred leading up to the election. Foreign interference in American democracy is bad enough, but there’s also the possibility that the Trump campaign actively abetted the undermining of the election. If such proof is believably uncovered, then even a Republican majority in Congress or the Supreme Court is unlikely to save him.

Watching the Trump-Russia story unfold, historian Douglas Brinkley told the Washington Post, “There’s a smell of treason in the air.” And as New York Times columnist Nicholas Kristoff put it, “He’s right, and we must dispel that stench” with a “careful, public and bipartisan investigation by an independent commission.”

Yet that is just the type of investigation the Trump administration and its Republican allies in Congress seem to resist the most.

It is worth remembering John Adams’ admonition when he was defending British soldiers after the Boston Massacre: “Facts are stubborn things; and whatever may be our wishes, our inclinations, or the dictates of our passions, they cannot alter the state of facts and evidence.” Facts tend not to go away, and trying to cover them up will only be successful for so long.