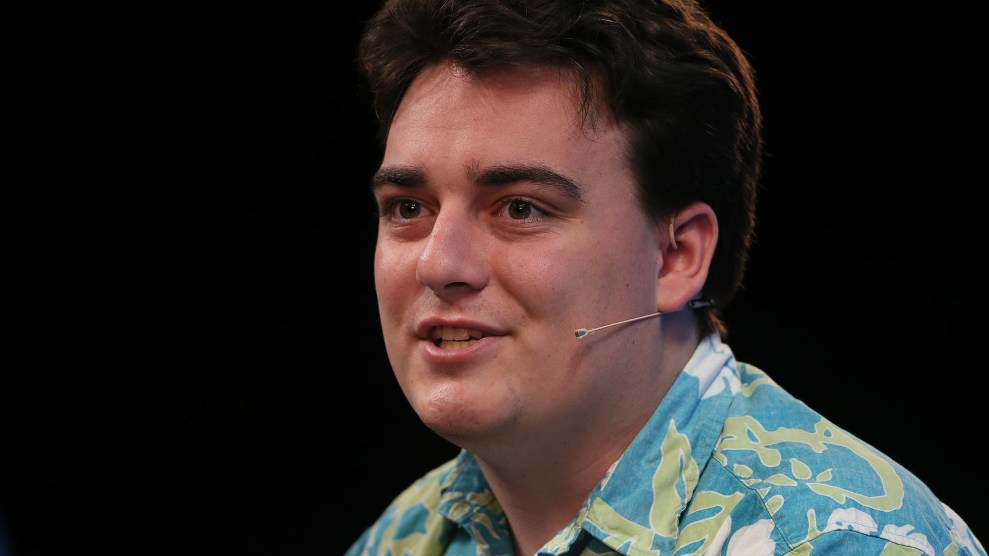 Palmer Luckey, the 24-year-old tech wunderkind who co-founded the virtual-reality company Oculus, which Facebook bought for $2 billion in 2014, donated $100,000 to President Donald Trump’s inaugural committee, putting him in the upper tier of contributors to the event.

Luckey came under scrutiny last year after it was revealed that he had funded a pro-Trump outfit that said it churned out memes—“shitposting,” in internet parlance—attacking Democratic nominee Hillary Clinton. Luckey told the Daily Beast that he helped underwrite the group, Nimble America, which also sponsored a billboard ad near Pittsburgh that called Clinton “Too Big to Jail.” “I’ve got plenty of money,” he said of his role funding Nimble America. “I thought it sounded like a real jolly good time.” Luckey, who is worth an estimated $730 million, left Facebook in March. Recode reported that his stature inside the company “had diminished” after his role in Nimble America was publicized.

But Luckey hasn’t given up on Trump.

California corporation records show a different address in the city of Long Beach for Wings of Time. That address matches the one used by Luckey on various occasions for different business projects.

Luckey has a separate company, Luckey Arms LLC, registered at the same address as the one listed by Wings of Time in the inauguration donation records. And California corporation records list another corporation as the manager of Wings of Time LLC, an entity called Fiendlord’s Keep, Inc. Luckey is listed in the records as the sole officer for Fiendlord’s Keep. Luckey and his attorney did not respond to requests for comment.

Luckey’s $100,000 donation was hardly the largest to Trump’s inauguration committee. That distinction belongs to the $5 million contribution made by casino magnate and prolific GOP donor Sheldon Adelson. But Luckey’s six-figure donation is equal to other tech moguls and Trump fixtures such as investor Peter Thiel, who also gave $100,000 to the inauguration effort.

And for those who are curious, Wings of Time and Fiendlord’s Keep aren’t random names. They’re elements from a popular video game originally for Super Nintendo called Chrono Trigger. According to a 2015 Forbes profile, Chrono Trigger is one of Luckey’s favorite games.