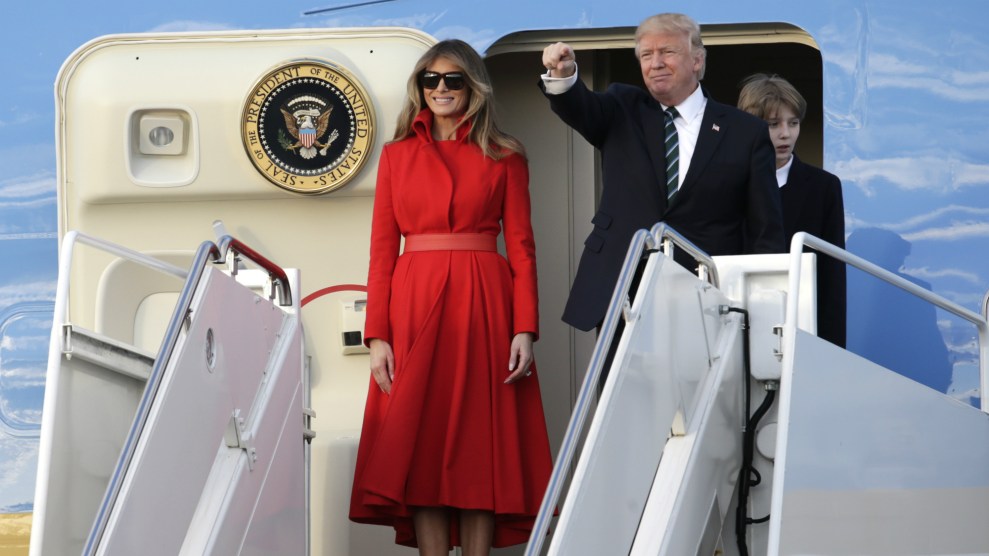 When Donald Trump travels to one of his properties for weekends of golf and well-done steak, he brings a massive entourage of aides, Secret Service agents, and all the trappings of the world’s most powerful job. And it’s all on the taxpayer’s tab.

It’s still not clear how much all of that costs, but we now know how much money it takes to operate the biggest presidential accessory involved with these trips: Every hour Trump flies on Air Force One costs taxpayers more than $142,000. For just two weekend trips to Mar-a-Lago that Trump took in March, taxpayers paid $1.2 million. Again, that’s just for the plane that ferried Trump. That doesn’t count the cost of fighter jet escorts, the planes carrying Trump’s limousines, or any of the on-the-ground costs.

The figures come from Judicial Watch, a conservative watchdog group that submitted Freedom of Information Act requests to the Department of the Air Force. Notably, Judicial Watch is the group that calculated the oft-quoted figure of $96 million as the tab for Obama’s family travel during his presidency. The group says it has also asked for figures for the cost of Secret Service protection and other expenses associated with Trump’s weekend trips, but those requests are still pending.

“We’re pleased the Air Force finally gave us some numbers for President Trump’s travel,” said Tom Fitton, president of the group, in a statement. Fitton vowed to go to court to get the other numbers. “Judicial Watch tracked some of the costs of President Obama’s unnecessary travel and we’re not closing up shop with a new administration.”

The figures do suggest that early estimates of the cost of Trump’s personal trips—as much as $3 million per weekend—might be in the right ballpark, but the exact amount remains difficult to tabulate. The FOIA responses Judicial Watch received detailed two separate trips, one of which included a stopover at an airport in Florida so Trump could hold an event with Secretary of Education Betsy Devos promoting a school voucher program. Each flight cost more than $600,000.

If Judicial Watch’s estimate of $96 million for Obama’s personal vacations is correct, it would mean that he averaged about $12 million a year on all travel. In other words, Trump is easily on pace to easily exceed his predecessors totals. Trump has spent seven of 13 weekends of his presidency at Mar-a-Lago, but the club is closing for the summer season. This weekend Trump makes his first trip to his New Jersey golf club, which will be a shorter flight, but will require moving Trump through the crowded New York City area. That could significantly increase his on-the-ground costs.