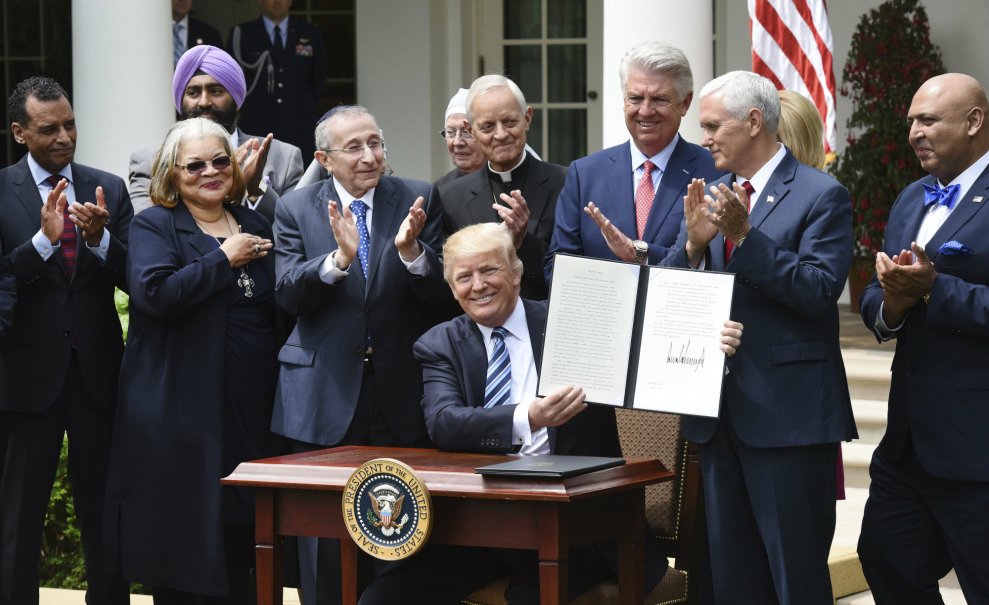 Update, 5:57 pm: The ACLU will not be bringing a lawsuit over the executive order, which it describes as “an elaborate photo-op with no discernible policy outcome.” In a statement the group says, “President Trump’s prior assertion that he wished to ‘totally destroy’ the Johnson Amendment with this order has proven to be a textbook case of ‘fake news.’”

President Trump marked the National Day of Prayer Thursday by signing what’s being billed as an executive order on “religious liberty.” The much-anticipated order will not include explicit, sweeping provisions allowing individuals and organizations to discriminate against people who are LGBT or having sex outside of marriage, as many had feared after a draft of the order leaked in February. Instead, it gives protections to groups that want to limit access to contraception and sets the stage for more political dark money to pour in from religious groups previously prohibited from political speech.

Many religious conservatives argue the right to freely practice their religion enshrined in the constitution permits them to legally discriminate or be exempt from certain laws on the basis of their faith. The executive order codifies this philosophy by strengthening employers’ ability to limit women’s access to contraceptive and other preventative healthcare services promised in the Affordable Care Act from private health plans. The order asks three agencies to consider issuing amended rules to make this process easier for employers if they have a religious objection.

The order was met with a mixed response from some conservative groups. The Alliance Defending Freedom, a Christian nonprofit that advocates on various political issues, said it did not go far enough. “Though we appreciate the spirit of today’s gesture, vague instructions to federal agencies simply leaves them wiggle room to ignore that gesture, regardless of the spirit in which it was intended,” said General Counsel Michael Farris in a statement. “We strongly encourage the president…to ensure that all Americans…enjoy the freedom to peacefully live and work consistent with their convictions without fear of government punishment.”

The order also makes good Trump’s campaign promise to his religious base to “get rid of and totally destroy” the Johnson Amendment, which prohibits tax-exempt charitable organizations, including churches, from engaging in political activity. Only religious organizations and churches will be exempted from the law, meaning other nonprofits will still be prohibited from political speech. “This executive order directs the IRS, not to unfairly target churches or religious organizations for political speech,” Trump said. “No one should be censoring sermons or targeting pastors.”

“This policy would create a massive loophole for dark money, allowing unlimited sums of money to flow to religious nonprofit organizations for expressions of political views.”

A number of advocacy organizations point out that exempting powerful religious organizations from prohibitions on political speech will bring a lot more dark money into politics. “This policy would create a massive loophole for dark money, allowing unlimited sums of money to flow to religious nonprofit organizations for expressions of political views,” said Noah Bookbinder, the head of the left-leaning watchdog group Citizens for Responsibility and Ethics in Washington, in a statement.

Bookbinder has called charitable groups the “next frontier” in undisclosed political spending because without the Johnson amendment in the way, it’ll be easy to start spending lots of money right away. “You have these ready-made, very large organizations that could do a lot of political spending,” he told me back in February after Trump reaffirmed his commitment to dismantle the law at the National Prayer Breakfast. “You wouldn’t have the challenges of having to set up a new organization and raise a lot of money for it.” Plus, Bookbinder says, those contributions are tax deductible, meaning people will likely give more.

Trump’s executive order may not have the anti-LGBT provisions the leaked draft does, but it gives Jeff Sessions plenty of leeway to develop rules, if he so chooses.

“In order to guide all agencies in complying with relevant federal law, the Attorney General shall, as appropriate, issue guidance interpreting religious liberty protections in Federal law,” the order reads.

Responding to the order, executive director of the National Center for Transgender Equality Mara Keisling said, “President Trump has simply asked others in his administration to do much of his dirty work.”

In anticipation of the executive order, many civil rights groups began preparing lawsuits, and at least one group still intends to file. “President Trump’s efforts to promote religious freedom are thinly-veiled efforts to unleash his conservative religious base into the political arena while also using religion to discriminate,” ACLU director Anthony Romero said in a statement. “It’s a dual dose of pandering to a base and denying reproductive care. We will see Trump in court, again.”