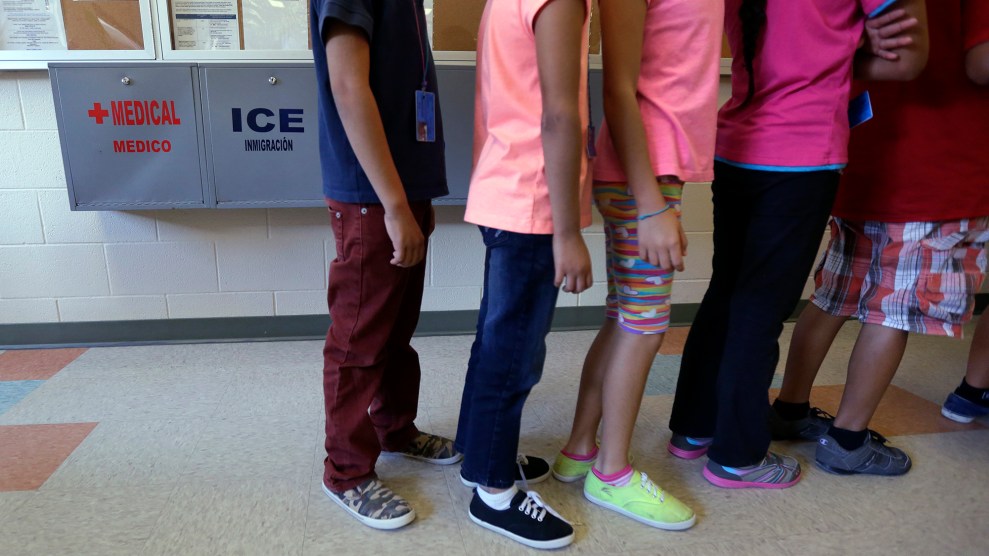 Detained immigrant children line up in the cafeteria at the Karnes County Residential Center near the border in Texas. Eric Gay/AP

The Trump administration has broadened its immigration crackdown with a new push to arrest undocumented parents who paid smugglers to illegally bring their children into the United States, often in a bid to protect them from gangs and other violence in Central America.

Every year, tens of thousands of unaccompanied minors are apprehended at the border, often from Honduras, Guatemala, and El Salvador. Under the Obama administration, these children were processed by immigration officials, and then placed with sponsors—typically family members who were already in the country and may have paid smugglers to bring them over. Under the Trump administration, immigration officials have started using information they get from children at the border to identify undocumented relatives for detention and possible deportation.

About a dozen arrests have been documented by lawyers and case workers so far, including in Pennsylvania, Virginia, New York, and Texas. It’s not yet clear what charges will be applied.

“ICE aims to disrupt and dismantle end-to-end the illicit pathways used by transnational criminal organizations and human smuggling facilitators,” a spokeswoman for the agency told McClatchy, which broke the story on Thursday.  “As such, we are currently conducting a surge initiative focused on the identification and arrest of individuals involved in illicit human smuggling operations, to include sponsors who have paid criminal organizations to smuggle children into the United States.”

Immigration advocates worry the crackdown will discourage sponsors from coming forward to claim their children at the border, leaving kids stuck in federal custody. Others fear it will make children more vulnerable to human traffickers.

“Punishing parents for providing assistance to their children…will not stop these children from fleeing violence,” Michelle Brané, director of migrant rights at the Women’s Refugee Commission, told reporters on Friday.

Then there are the psychological effects. The Trump administration “is essentially using these children to unwittingly turn in their own parents, and this is going to haunt these kids for a very long time, especially if their parents are deported, especially if their parents are jailed or sentenced,” said Maria Woltjen, executive director of the Young Center for Immigrant Children’s Rights at the University of Chicago.

Parents who are deported could also leave behind other kids who are US citizens, putting more pressure on an already overburdened foster care system.

While the Obama administration focused its deportation efforts on recent immigrants and those with criminal convictions, the Trump administration has targeted a much broader group of undocumented people. On Thursday, the House passed two bills that would give the administration more power to detain and deport immigrants.

For more on the plight of unaccompanied minors at the border, check out this investigation by my colleague Ian Gordon.