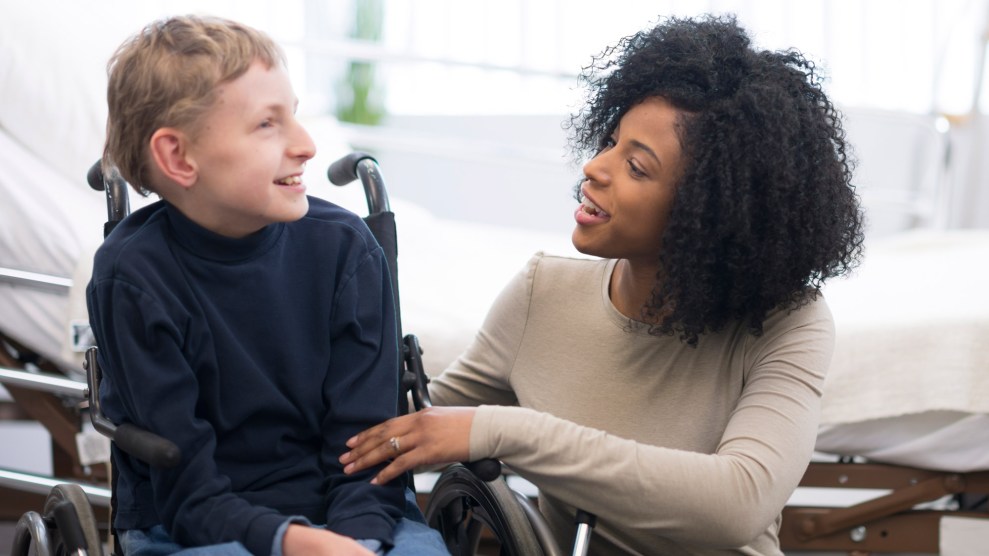 On the eastern end of Michigan’s Upper Peninsula, Rachel Fuerer’s school district depends on more than $870,000 in Medicaid funds each year. About 5 percent of its overall annual budget, the money goes toward providing medical services for more than 1,000 special education students in 19 public schools across 4,000 square miles.

Those dollars, though, will be at risk if Republicans in Washington get their way.

Last week, Senate Republicans’ efforts to repeal and replace—and then just repeal—Obamacare appeared to be dead. But now, at President Trump’s urging, senators are again poised for a vote on some sort of health care overhaul this week, though it remains to be seen whether they’ll vote on a partial repeal of the Affordable Care Act (ACA) or a full repeal and replace effort.

What is clear is that passing either bill would greatly endanger the future of Medicaid. The repeal and replace bill, the Better Care Reconciliation Act (BCRA), imposes a cap on Medicaid spending that would sharply reduce funds in future years. The alternative, a bill introduced by Senate Majority Leader Mitch McConnell (R-Ky.) last week that mirrors a 2015 effort to mostly repeal Obamacare, would shrink Medicaid spending over the next decade, especially for people who were newly eligible to receive Medicaid through the ACA.

Though McConnell currently lacks the votes to ensure either bill’s passage, school officials and advocates are keeping their eyes trained on the Senate.

“We’re being told that special education is being spared, but that’s not true at all if there are cuts to Medicaid.”

“We’re being told that special education is being spared,” says Fuerer, who works as special education director at Michigan’s Eastern Upper Peninsula Intermediate School District, “but that’s not true at all if there are cuts to Medicaid.”

Fuerer joined hundreds of school superintendents from across the country in recent weeks in descending upon Washington to lobby Congress, meeting with their state’s representatives to convince them to leave Medicaid alone. “They’re lumping everything together in this repeal and replace,” Fuerer says. “In doing so, they are trying to fix something that’s not broken. Medicaid isn’t broken.”

To Fuerer’s surprise, even just the few House members she met with the other week didn’t fully understand the extent of just how much schools rely on Medicaid dollars. While the program is primarily used to fund health insurance for low-income families, it also doles out billions of dollars each year directly to school districts to fund special education services that are mandated by federal law and to support services for poor students. Now school superintendents, from both red and blue states, are expressing concern that the GOP’s health care plans would force districts to struggle to provide crucial services for their most vulnerable students.

In talking about the bill as a “repeal” of Obamacare, Republican rhetoric can be misleading. BCRA would fundamentally remake Medicaid, a program that has operated since 1965, slicing spending by $772 billion over the next decade and leaving 15 million more people uninsured. It does this by turning Medicaid from an open-ended promise from the government to fund state needs into a block grant or per capita program starting in 2020 that will limit the amount of money each state receives.

Currently, John Hill, executive director of the National Alliance for Medicaid in Education, estimates that “almost half the children in this country are on Medicaid.” “So any cut is going to have an adverse effect on kids, no matter how much they’ll assure us it’s not going to happen,” Hill tells Mother Jones.

As mandated by the Individuals with Disabilities Education Act (IDEA) from 1975, schools must provide a free and appropriate public education to students with disabilities. But Congress has historically fallen short on covering the cost of educating special-needs students under IDEA, so states and local agencies have turned to Medicaid to help offset the difference and pay the cost for medical services and equipment. Starting in 1988, schools, like hospitals and insurance providers, have been able to request reimbursements from the Department of Health and Human Services for such expenditures.

In 2015, schools received nearly $4 billion in Medicaid funding, according to the Center on Budget and Policy Priorities, less than a third of what’s doled out for special education spending under IDEA.

That $4 billion has been essential to schools covering the costs of speech and physical therapy, behavioral services, and medical equipment, such as wheelchairs and walkers. For low-income students, districts use such funds to pay for vision, hearing, and other health screenings, as well as for school nurses and mental health services. It’s also important to note that school districts don’t just offer services to poor and disabled students during school hours; they act as a connecting point to enroll eligible low-income families in Medicaid and in the Children’s Health Insurance Program and help families find health care providers. In turn, schools get reimbursed for their outreach efforts.

Sherri Smith, the superintendent of Lower Dauphin, a suburban Pennsylvania school district of just 4,000 students, was also in D.C. recently to meet with representatives. She says the small but targeted $50,000 in Medicaid funding her district receives each year helps pay for more medical-related services, such as occupational and physical therapy, along with mental health services to serve a growing need for students in the district. The money also allows the district to pay for additional nurses and personal care aides for students with disabilities and low-income students.

“Schools are doing more outside the peripheral of just teaching and educating,” Smith says. “So actually getting Medicaid dollars for medical services for our students, which they need, allows us the opportunity to do so. I’m afraid that without those kinds of dollars, that will go away.”

While neither the House nor Senate repeal-and-replace bill specifically targets funding for school districts, with less money coming from Washington, states would be forced to make cuts elsewhere in their budgets, which could impact the entire community. Districts might be pushed to raise taxes, reduce spending on general education programs, or cut staff.

If schools opted to diminish services for special education students, they could be at risk of falling out of compliance with federal law, opening districts up to lawsuits and a potential further loss of federal dollars. This is all the more complicated due to a recent Supreme Court ruling that raises the standard for what schools must offer and expands students’ rights.

Similarly, for Fuerer in Michigan, the cuts to Medicaid funding in the proposed health care bills would mean that her district might need to slash its overall budget just so the same level of services can be provided. “The reality is, [the loss of Medicaid funding is] probably not cutting a speech provider. It’s probably cutting a gen ed teacher,” she says. “If you weaken the general education services, you are weakening the entire school community.”

“Schools can’t compete with other frontline healthcare providers for those dollars. From our perspective, it could end Medicaid as we know it in schools.”

Sasha Pudelski, assistant director of policy and advocacy for the School Superintendents Association, says that changes to Medicaid could put schools in competition with hospitals and insurance providers for Medicaid dollars. “Schools can’t compete with other frontline healthcare providers for those dollars,” Pudelski says. “From our perspective, it could end Medicaid as we know it in schools.”

Fuerer attended three meetings with Michigan representatives when she was in Washington this month, at least one of which really surprised her. When she sat down with freshman Republican Rep. Jack Bergman, she says, “he had never heard about the Medicaid billing in schools and he listened very intently.” “He didn’t commit to changing his position,” she says. “He voted for the House bill. But he was interested and asked us for more information. It was better than the other ones.”

Fuerer also met with an aide to Republican Rep. Justin Amash, who voted yes on the House bill that included cuts to Medicaid spending similar to those in the Senate proposals. In the meeting, Fuerer recalls the staffer saying that Amash believed that responsibility for funding education and healthcare should be left to states. Fuerer says she finds that response “a little frustrating.”

Chris Kjolhede, co-director of the school-based health program at Bassett Healthcare Network, which runs in-school health clinics across 15 school districts in rural upstate New York, says that though it’s still too early to know the extent of damage on schools in the GOP’s legislation, it is “terrifying to think about major cuts to Medicaid.” He says roughly half of children who work with his program receive care as a result of Medicaid funding and New York’s Child Health Plus program.

Kjolhede’s program relies on the federal funds to provide dental, physical, and mental health services for more than 7,500 kids. He adds that Bassett has advocated with elected officials to let them know that the group was concerned about the loss of Medicaid reimbursements in his red district. “If the funding goes away, theoretically, I have to figure out how to pay for the services or the services go away,” Kjolhede tells Mother Jones. “There’s a lot of pressure on those of us trying to make it happen.”