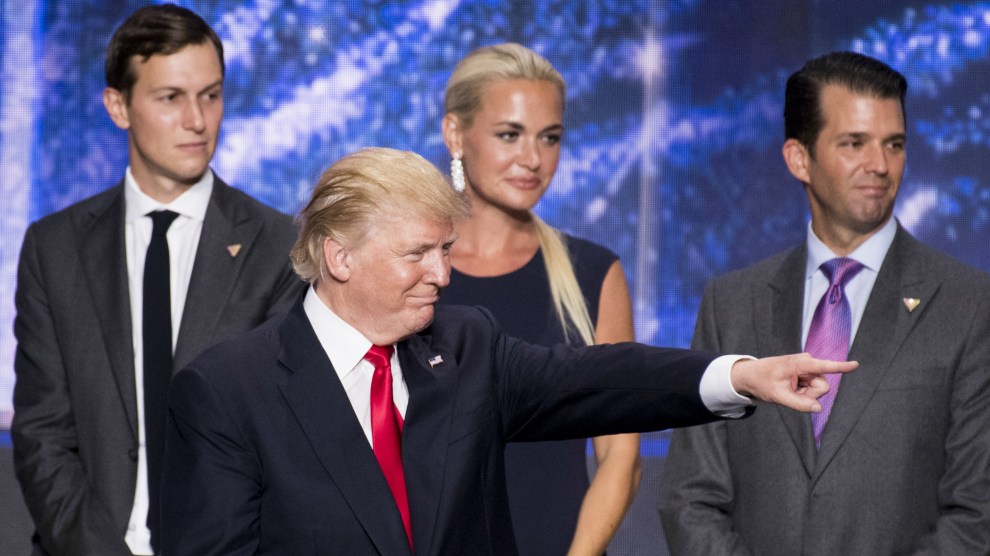 By now the pattern is clear.

After every major news story regarding the relationship between the Trump administration and Russia comes the official denial. When that denial collapses, then comes a dismissal: Nothing really happened, it didn’t mean anything, it’s all just “a nothing burger,” in the flippant words of Trump chief of staff Reince Priebus.

Then, when additional reporting backs up the story, the Trump administration backpedals, insisting that while some version of the events in question might have in fact occurred, there’s no proof of collusion. In the end comes an attack on the news media or the raising of some other distraction.

We have seen this sequence of events play out again and again—most notably this week with Donald Trump Jr.’s emails revealing how he, along with then-campaign chief Paul Manafort and President Trump’s son-in-law and senior adviser Jared Kushner, met in June 2016 with a Russian-government-connected lawyer offering up dirt on the Clinton campaign. The New York Times broke the story this way:

If the future president’s eldest son was surprised or disturbed by the provenance of the promised material—or the notion that it was part of a continuing effort by the Russian government to aid his father’s campaign—he gave no indication.

He replied within minutes: “If it’s what you say I love it especially later in the summer.”

On July 24, 2016, a little more than a month after his meeting with the Russian lawyer, and two days after WikiLeaks began releasing Clinton campaign emails thought to be hacked by Russian intelligence operatives, Trump Jr. expressed his indignation at the charge from Democrats that Russians were helping his father’s campaign. Trump Jr. told Jake Tapper on CNN that the suggestion of Russian assistance was “disgusting” and “phony.” Trump Jr. went on to say, “I can’t think of bigger lies, but that exactly goes to show you what the DNC and what the Clinton camp will do. They will lie and do anything to win.”

CNN has since compiled a long list of denials from Trump administration officials who have been directly asked if there were any contacts between the Russians and the Trump campaign. For example, also on July 24, 2016, Manafort appeared on ABC’s This Week.

“Are there any ties between Mr. Trump, you or your campaign, and Putin and his regime?” asked George Stephanopoulos.

Manafort responded definitively, “No, there are not. That’s absurd. And, you know, there’s no basis to it.”

But we now have the email chain to prove that Trump Jr., Kushner, and Manafort were talking to the Russians before the release of the stolen emails. Beyond that, we know they were told that the lawyer they met with was a representative of the Russian government and that the information she had “would incriminate Hillary and her dealings with Russia and would be very useful to [Donald Trump]” and that it was “part of Russia and its government’s support for Mr Trump.”

Despite what Sanders’ adamant denial suggests, the changing narrative around the meeting with the Russian lawyer, in the words of Washington Post’s Philip Bump, “was not a one-off example of a staffer or ally loyal to President Trump being caught in a factual error or omission related to Russia. Instead, it’s part of a pattern of similar behavior.”

Here are previous examples where Trump officials or family members met with Russians. The responses to the revelations typically follow the same trajectory of denial followed by dismissal:

“A lie never lives to be old,” Sophocles once wrote. Today, Special Counsel Robert Mueller’s team of high-powered investigators is cross-referencing the facts with the denials trotted out by the Trump administration. It may feel like it’s taking forever, but the truth will come.