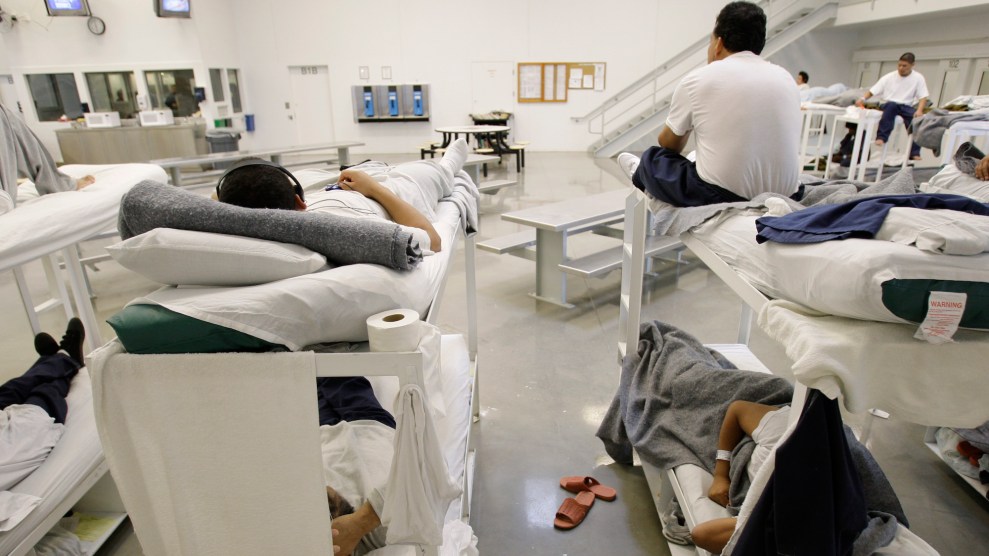 Thousands of immigrant detainees were paid $1 per day or, in some cases, with extra food as compensation for keeping one of the country’s largest for-profit immigration detention centers running, according to a lawsuit filed today by Washington state Attorney General Bob Ferguson. The lawsuit targets the GEO Group, one of the country’s two most profitable private prison companies, over the controversial work program, which Ferguson says has violated the state’s minimum wage policy since it was implemented in 2005.

Each day, Tacoma’s Northwest Detention Center houses up to 1,575 detainees in Immigration and Customs Enforcement (ICE) custody as they wait for deportation or to appear before a judge to resolve their immigration case. While in custody, the detainees can opt into a voluntary work program in which, according to the complaint, they may be assigned to prepare, cook, or serve food, operate the laundry service, clean living areas and bathrooms, paint walls, or buff floors. Detainees perform “virtually all non-security functions” at the facility, the AG’s press release says. No matter how many hours they work, GEO pays them $1 per day or “in snack food such as chicken, potato chips, soda, and/or candy,” the complaint alleges.

Meanwhile, ICE pays GEO $115.95 per detainee per day to hold the vast majority of the people in the Tacoma detention center.

Ferguson is accusing GEO of violating Washington state’s minimum wage laws, which currently require workers to be paid a minimum of $11 per hour. He claims that by systematically underpaying detainees, GEO profited from illegal activity. While inmates and residents of state, county, or municipal detention centers are exempted from the minimum wage under state law, Ferguson argues that the detainees held in the private, for profit-detention center are not exempt—and that GEO now has to pay up.

The AG wants the court to order GEO to start paying detainee laborers minimum wage moving forward and also to give up “millions in ill-gotten profits” produced by the work scheme since 2005. The funds would likely go into an account “dedicated to supporting people detained in” the Northwest Detention Center, which is the only private immigration detention facility in the state, according to the AG’s office.

It’s not the first time GEO’s dollar-a-day program has come under fire. In February, a federal judge ruled that a similar challenge brought by detainees in the company’s Aurora, Colorado, facility could proceed as a class action. In that case, detainees alleged that the company forced them to clean the facility without any pay, threatening them with solitary confinement if they refused, and that GEO “unjustly enriched” itself by paying them for other labor under the same dollar-a-day “voluntary work program” that exists at Tacoma. As I reported back in April, here’s a rough estimate of how much money the company saved through to its dollar-a-day policy at the Colorado facility:

During a deposition, GEO’s assistant business manager at Aurora testified that if there were no “voluntary workers” like Argueta [one of the plaintiffs], the company would need to bring in additional officers, paid at hourly wages set by rules in GEO’s contract, to get the same work done. So how much would the company have to shell out if it didn’t rely on cheap detainee labor? Under GEO’s contract with ICE, which incorporated federal wage regulations, the lowest allowable employee wage at the Aurora facility was $10.90 an hour for food service workers. A typical shift in the voluntary work program lasted approximately seven hours, according to the detainee work program policy—so if GEO had hired additional employees to do the work, it would have cost the company nearly $76.30 per shift. (That’s a lowball estimate, given that some detainees worked jobs that would have paid significantly more.) Instead, they spent $1.

That translates to huge cost savings. Take, for example, November 2012, when detainees took hundreds of voluntary work program shifts. If GEO had hired employees to do those jobs instead, the company would have spent more than $125,000 in wages and benefits that month. GEO’s actual payments: $1,680.

GEO has appealed the class-action status granted to the Colorado lawsuit in April. The case is currently in discovery.

In a statement responding to the Washington lawsuit, GEO spokesman Pablo Paez said the company “strongly refutes the baseless and meritless allegations made in this lawsuit, and we intend to vigorously defend our company against these claims.” Paez also maintains that the “minimum wage rates and standards” associated with Tacoma’s voluntary work program are set by the federal government. That’s true to an extent: ICE only reimburses GEO for $1 per detainee work shift in its facilities. But back in February, Colorado District Court Judge John Kane ruled that the company was not compelled to only pay a fee that matched its reimbursement.

Earlier this year, hundreds of Tacoma detainees began a hunger strike over the dollar-a-day work program and other conditions, including what they described as bad food, poor access to medical care, high commissary prices, and lengthy immigration proceedings. “It is not just for them to treat us the way they want without them respecting our rights,” detainees wrote in a letter of demands in April. “And if we don’t speak up we’ll always have the same.”