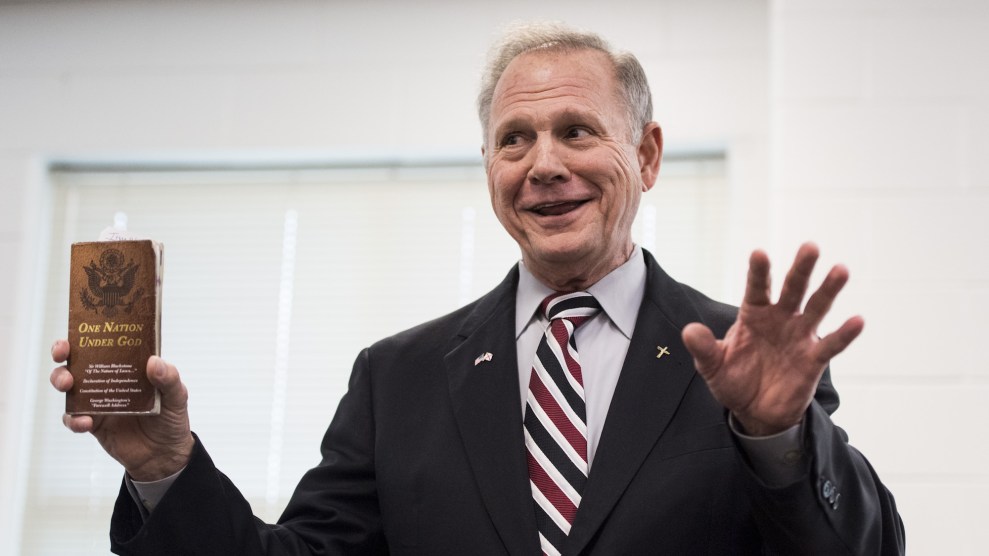 The Republican Party has a new star: former judge Roy Moore. On Tuesday night, in an Alabama GOP primary, Moore defeated Luther Strange, who was appointed to the Senate seat Jeff Sessions vacated when he became attorney general. Now the controversial Moore—who was twice booted off the Alabama Supreme Court for defying federal orders (once for violating a same-sex marriage ruling, once for resisting an order blocking him from placing a Ten Commandments monument at a courthouse)—is the favorite to win a Senate seat in the general election.

Moore is a conservative extremist who has pushed birtherism and declared that Sharia law was taking over communities in Illinois and Indiana. (It is not.) He is best known for mounting a crusade to place the Ten Commandments in public spaces and for leading the far-right opposition to marriage equality. And during this Senate campaign, news stories have noted that he has called for criminalizing homosexuality. Last week, CNN posted a video clip of Moore defending this position during a 2005 interview with Bill Press on C-SPAN.

In this short excerpt, Moore says “homosexual conduct should be illegal” and calls it “immoral” and “detestable.” But the full face-off between Moore and Press is enlightening. Press keeps challenging Moore to explain what portion of the Constitution supports discrimination against gay Americans. Moore counters by contending that it was essentially unconstitutional for judges—including the Supreme Court—to overturn laws against sodomy. At one point, though, Moore notes that “you don’t find morality in the Constitution,” and then he proclaims, “We get our morality from the Holy Bible on which this nation is founded.” He denounces courts for having established a “right” to sodomy.

Of course, Moore goes straight to the bestiality argument. “Do you know,” he asks, “that bestiality—the relationship between man and beast—is prohibited in every state?” Press interrupts to ask if he is comparing homosexuality with bestiality, and Moore says yes: “It’s the same thing…It is a moral precept on which this country is founded.” Apparently, the founders established the United States to protect its citizenry from homosexuality and bestiality.