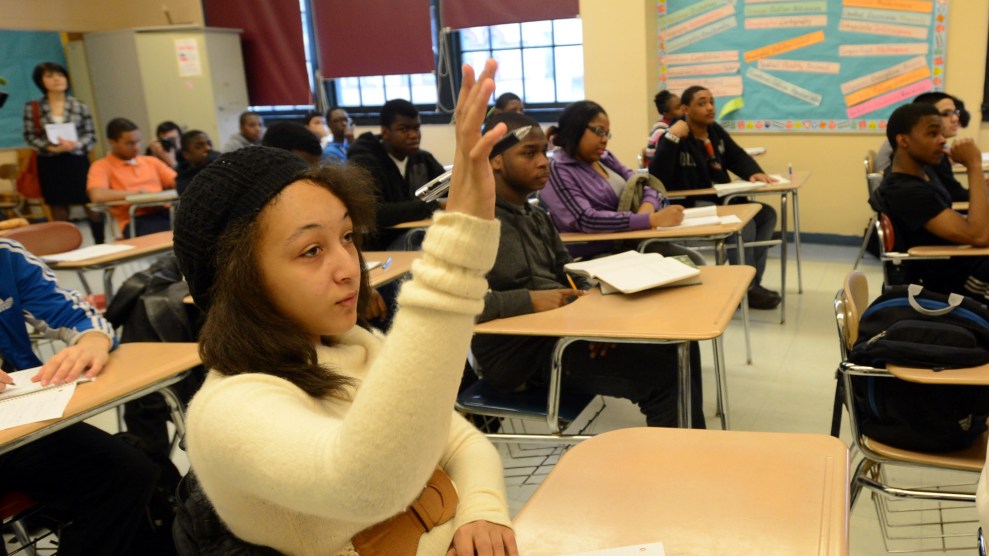 Funding for public schools in high-tax states, such as this one in Brooklyn, New York, could be threatened by the Republican tax proposal. Xinhua/ZUMA

Republicans in the House and Senate are trying to gut a deduction for state and local taxes that mostly helps the richest Americans. Democrats are outraged. What’s going on?

It’s true that under the state and local tax deduction (SALT), which will cost taxpayers $1.3 trillion over the next decade, 44 percent of the write-offs for income and sales taxes will go to the top 1 percent, and essentially none will go to the working class. But liberals, who might ordinarily be excited to eliminate a regressive tax break, instead believe Republicans are threatening state funding for education and infrastructure just to offset corporate tax cuts that do even less for moderate-income Americans.

Michael Leachman, who directs state budget research at the left-leaning Center on Budget and Policy Priorities, explains that SALT makes wealthy people likelier to tolerate higher income taxes because the federal government is picking up part of the tab. For people in the top tax bracket, every dollar they deduct in state taxes reduces their federal tax bill by about 40 cents. Without the deduction, wealthy people might push for lower income taxes, prompting states either to raise other taxes or to cut spending.

Neither would be good for working-class people in high-tax states. Sales and property taxes are both more regressive than income taxes. Spending cuts could hit schools and infrastructure. Nationally, more than 90 percent of state and local K-12 funding comes from state and local governments, along with 75 percent of infrastructure spending. It would also be harder for states to expand their social safety nets through programs like single-payer health care without the deduction, since these programs generally require people to pay higher taxes in exchange for more services. Moody’s, the credit rating agency, projects that eliminating SALT could increase borrowing costs for state and local governments by limiting their ability to raise taxes, further straining their budgets.

The century-old deduction for state and local taxes has been around for as long as the income tax itself. Today, SALT works by letting taxpayers deduct their property taxes along with either state income or sales taxes. About 90 percent of households that make at least $200,000 use it, compared to just 10 percent of households that make less than $50,000 per year. (Less affluent Americans tend to use the standard deduction instead of itemizing their returns.)

The Republican tax bills would eliminate the deduction for income and sales taxes, while keeping it for up to $10,000 in property taxes. That’s closer to full repeal than it sounds: People deduct more income and sales taxes than property taxes in 77 percent of House districts. And only about 5 percent of taxpayers—down from a quarter today—would itemize their tax returns at all after the standard deduction doubles and other tax breaks go away. (As Mother Jones has written, the value of increasing the standard deduction is undercut by eliminating personal exemptions.)

Republican are betting they can get away with eliminating SALT because its beneficiaries are concentrated in blue states with high taxes. “It’s death to Democrats,” Stephen Moore, an economist who advised the Trump campaign, told Bloomberg this week. On Monday, California Gov. Jerry Brown called the Republican attempt to target blue states divisive and “evil in the extreme.”

In New Jersey, 41 percent of taxpayers write off state and local taxes, averaging a $17,200 deduction. In Texas, 22 percent deduct an average of $7,600 apiece. Taxes and the cost of living are high enough in some blue states that many middle-class taxpayers would see their taxes go up if SALT is repealed. In New Jersey, 27 percent of middle-class households would pay more under the House tax bill in 2027, according to the liberal Institute on Taxation and Economic Policy. Rep. Bill Pascrell (D-N.J.) told Mother Jones that the move to cut SALT won’t just hit doctors and lawyers, but also “firefighters, first responders, police officers, and teachers.”

Alternatively, top earners could leave high-tax states. That would be particularly problematic for places like New York City, where fewer than 40,000 taxpayers provide 45 percent of the city’s taxable income. Minutes after the Senate passed its tax bill on Saturday, Sen. Ted Cruz (R-Texas) boastfully claimed that Americans are already “fleeing” high-tax states as they head to low-tax ones like his own “in droves.”

State and local officials are fighting to keep the deduction. Stephen Benjamin, the Democratic mayor of Columbia, South Carolina, and vice president of the US Conference of Mayors, says losing SALT could lead critical services to be cut. Gov. Brown charged Republicans with hurting schools because 40 percent of California’s income tax goes toward funding them.

Republicans counter that there’s no reason to subsidize high-tax states. They usually don’t mention that New Jersey and California rank 39th and 43rd, respectively, in the share of state revenue that comes from federal aid. Mississippi and Louisiana top the list.

Rep. Pascrell has little patience for the idea that New Jersey is getting subsidized. He cites West Virginia’s dependence on federal dollars and says he doesn’t “want to go into the other states because it’s even more embarrassing.” New York Gov. Andrew Cuomo said this week that using blue states as a “piggy bank to finance the tax cuts in the other states” will only worsen that inequity. He called it “political retaliation through the tax code.”