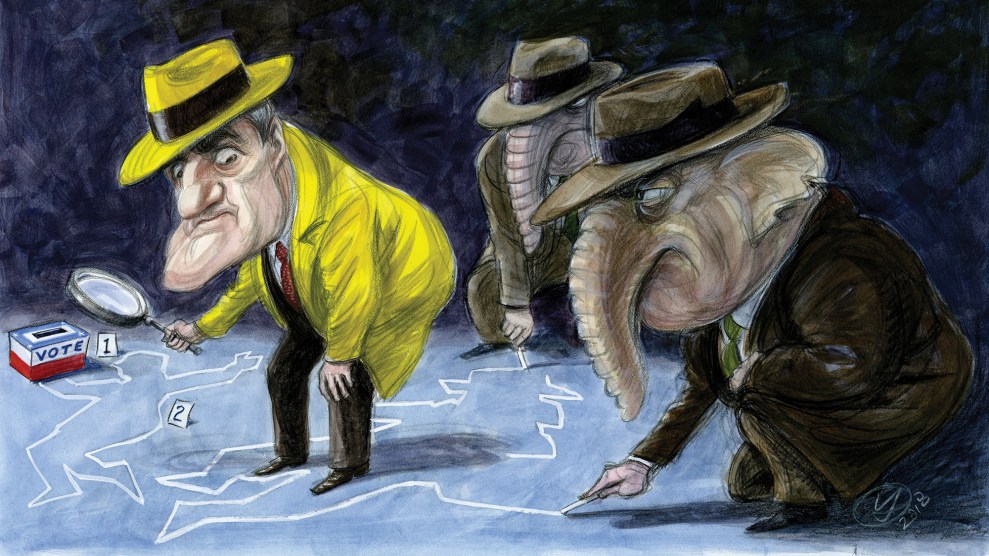 It was a Google Alert that notified me I was part of what was then the latest Republican conspiracy theory.

The message, in mid-January, pointed me to a column by Rep. Jim Jordan, a very conservative Republican from a very Republican district in Ohio, posted on the very conservative site Newsmax. Jordan, who was an assistant wrestling coach before entering politics, had drawn up a list of “18 top questions to be answered about Russia and the FBI.” I was Question No. 16.

In his introduction to this list, Jordan noted, “The American people deserve to know the extent of Russian interference into our free elections.” Yet for weeks, Jordan had been one of the leading Republicans decrying the investigation of the Trump-Russia scandal led by special counsel Robert Mueller. His 18 questions contained not one query about Russian President Vladimir Putin’s covert attack on the 2016 election, nor did they consider any of the multiple interactions between the Trump campaign and Russians.

Jordan’s main focus was a very different claim: that the FBI had secretly plotted to keep Donald Trump from winning. It was a manifestation of what has become the dominant line of attack as conservatives seek to torpedo the Trump-Russia investigation.

Republicans have sought to create confusion so that Mueller’s probe is seen as partisan and untrustworthy.

His was hardly the first attempt to undermine the effort to uncover the full truth of what happened in 2016. Since Trump took office, he and his Republican allies have tried one approach after the other to distract and deflect attention from the scandal. With each gambit, they have sought to create confusion so that Mueller’s probe and the congressional investigations are not seen as legitimate and necessary but as partisan-driven and untrustworthy.

When the congressional investigations kicked into gear a year ago, Trump and his Capitol Hill helpmates went into high dudgeon about leaks of classified information—remember “unmasking“? Soon came another attempt to change the channel: Trump’s famous tweet claiming he had been “wire tapped” in Trump Tower by President Barack Obama. Looking to back up Trump at that point, Rep. Devin Nunes (R-Calif.), the chair of the House Intelligence Committee, even maintained he had evidence of surveillance abuses. He didn’t—and because of his skulduggery, he had to step away from leading his committee’s Russia probe last April.

As those storylines petered out, Trump and the Republicans looked for another diversion, and they spun out competing and contradictory narratives: Either (A) the FBI had been duped by Democratic operatives into launching its Trump-Russia investigation, or (B) the bureau was part of a sophisticated “deep state” effort to sabotage Trump’s campaign.

According to Theory A, the FBI was bamboozled by Hillary Clinton operatives and Christopher Steele, the former British intelligence officer who produced the infamous dossier on Trump and Moscow. Steele, who had gathered this information while working for Fusion GPS (a research firm then being paid by the Clinton campaign and the Democratic Party), had shared these unverified reports with the FBI. For some Republicans, this meant the bureau’s entire inquiry was sparked by phony opposition research as part of a Democratic dirty trick—that is, a hoax that should be shut down.

It is true that Steele passed his unconfirmed reports to the bureau and that the FBI took a serious interest in them. But there has been no indication this prompted the bureau’s investigation. The FBI opened its Trump-Russia inquiry in July 2016 after the Australian government—following WikiLeaks’ dump of Russian-hacked Democratic Party emails—notified the United States that its top diplomat in Britain had months earlier been told by George Papadopoulos, a Trump campaign foreign policy adviser, that the Russians had dirt on Clinton. Papadopoulos’ contacts with Russians piqued the interest of FBI agents, who had already picked up information on other possible ties between Trump associates and Russia. (Papadopoulos last fall cut a deal with Mueller and pleaded guilty to lying to the FBI.)

Once the New York Times reported in December that the Papadopoulos-Aussie chat had triggered the probe, Theory A got even thinner. But Theory B remained. This theory depicts the FBI as a malevolent, corrupt, and partisan institution that underhandedly attempted to thwart Trump’s presidential bid—and used Steele’s memos to do so. Like other Republicans, Jordan has publicly asserted that the FBI mounted “an orchestrated plan to try to prevent Donald Trump from being the next president,” citing as evidence a series of text messages between two FBI officials that derided Trump. (They also criticized Clinton and Bernie Sanders.) Never mind that back in July 2016 FBI Director James Comey accused Clinton of being “extremely careless” in how she had handled emails with classified information as secretary of state, and that shortly before Election Day he revived the email server controversy—a move that, no doubt, contributed to her defeat.

Here’s where I come in. In a Mother Jones article published eight days before the election, I was the first to reveal the existence of the Steele memos, and to report that Steele (whom I did not name) had shared them with the FBI.

Which brings us to Jordan’s Question No. 16: “Why was FBI general counsel Jim Baker reassigned two weeks ago? Was he the source for the first story on the dossier by David Corn on Oct. 31, 2016? Or was it someone else at the FBI?” The not-too-veiled implication is that the FBI secretly passed me the Steele memos to discredit Trump.

Jordan’s attempt to turn me into a dot he could connect to a grand conspiracy did not come out of the blue. A few weeks before he posed these questions, unidentified Republican congressional sources told Politico they were investigating whether Baker had been a source for my article, noting they had found documents linking Baker to me.

The GOP crusaders have actively impeded a clear public discussion of what happened in 2016—and, more important, how future assaults could be prevented.

This was a complete nonstory. I have known Baker for several years, but he was not a source for my article, as I told Politico—breaking with the journalistic practice of not discussing sources. In this case, I believed it was necessary so my reporting would not be used in the right’s crusade against the Trump-Russia inquiry to demonize Baker, an innocent and dedicated civil servant. As I detail in my forthcoming book, co-written with Michael Isikoff, Russian Roulette: The Inside Story of Putin’s War on America and the Election of Donald Trump, the FBI had nothing to do with this article. It was not part of an FBI scheme. Republicans were just trying to gin up a bogus, fact-free mini-scandal, and it didn’t matter whom they smeared. This unfortunately fits the pattern, from Trump on down, of GOP provocateurs hurling scurrilous claims—even when the evidence they have disproves the charge—to undercut investigations.

So, sorry, congressman, that I’m not a data point for your alternative-facts world.

Republicans certainly can be forgiven for taking an interest in a Democratic opposition research effort and how it might have influenced an FBI probe. That’s a legitimate inquiry. But Jordan, following Trump’s lead, is instead peddling an Alex Jones-like tale that depicts the FBI, not Putin, as the chief villain. In a similar vein, conservatives (and Russian trolls) recently raised a mighty fuss about a secret memo prepared by Nunes aides that claims the FBI may have inappropriately used the Steele dossier to obtain a warrant to conduct surveillance on a Trump campaign adviser named Carter Page. This memo was released last week, and, it turned out, the document actually undercut the GOP contentions that the Page warrant was powerful evidence of FBI abuses and that the FBI’s Trump-Russia investigation had been improperly launched. It was a dud—but another sideshow that sucked up plenty of media attention. (I was also drawn into this Republican caper. The memo cited my article about the dossier to suggest Steele, by talking to a reporter, had violated his relationship with the FBI and, consequently, was an unreliable source for the FBI and the Page warrant. But this assertion was misleading. Steele had been cooperating informally with the FBI and was free to share his information with reporters.)

Republicans, driven by short-term political self-interest and a desire to insulate Trump from whatever Mueller finds, have refused to come to terms with the main point of the Russia scandal: The United States is the ongoing target of sophisticated and extensive information warfare, one that already affected a presidential campaign. Yet the GOP crusaders have actively impeded a clear public discussion of what happened in 2016—and, more important, how future assaults could be prevented. In early 2017, the US intelligence community concluded that one goal of Putin’s operation against the United States was to sow chaos and discord. And that’s exactly what Trump, Jordan, and the others have been doing too. They have joined Putin in that fight.

The forthcoming book from David Corn and Michael Isikoff, Russian Roulette: The Inside Story of Putin’s War on America and the Election of Donald Trump, will be released on March 20.