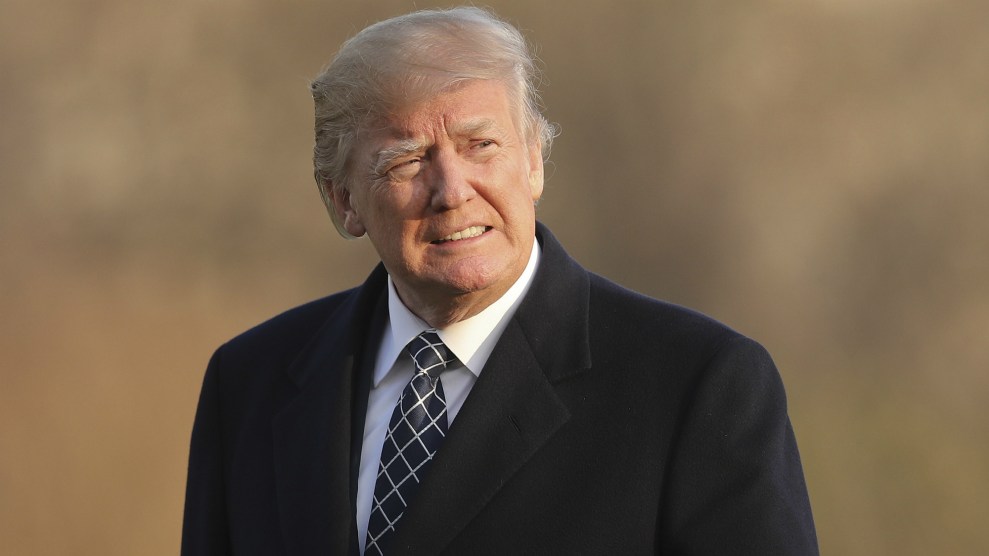 Donald Trump’s legal fight to keep the public from prying too far into his private business dealings was dealt a serious blow Wednesday when a Maryland judge ruled that a lawsuit, alleging the president is violating the US Constitution by continuing to own his business empire while he holds office, may go forward.

The case, filed last spring by attorneys general of Maryland and Washington, D.C., contends that Trump is in violation of the emoluments clause, which prohibits high federal office holders from accepting gifts from foreign governments. A handful of other lawsuits making the accusation have also been filed, but looming over them all is the question of who actually has legal standing to file the suit.

Late last year, a New York judge ruled that two case filed in federal court by plaintiffs that included a public watchdog group, New York City restaurant owners, and a lawyer who said he represented the public at large didn’t have standing—throwing cold water on some of the buzz in liberal circles around the emoluments clause issue. But, in the case filed in Maryland, the judge wrote in Wednesday’s decision that these plaintiffs do indeed have standing—and suggested other states would too if they make the same arguments. To have standing, a plaintiff has to demonstrate they’ve suffered real damages, which seemed to many legal experts to be difficult to prove and entirely theoretical for many potential plaintiffs when it comes to how a Constitutional clause, written as a response to the practice of foreign monarchs lavishing jewels and horses on diplomats, applies in modern times.

But the D.C. and Maryland AGs successfully argued that convention centers owned by the two governments were in competition with the president’s business empire, focusing in particular on Trump’s ownership of a luxury hotel on Pennsylvania Avenue in Washington, and that representatives of foreign governments flocking to Trump’s hotels hurt their business. The D.C. hotel has openly courted business with foreign embassies, and with Trump retaining his ownership, the booking of rooms or space at the hotel is essentially a payment to the president. Last month, the president’s attorneys said they had donated some proceeds from foreign governments to the US Treasury as an effort to defray public concerns about the president doing business, though ethics experts say the move doesn’t clear the issue.

While the matter of legal standing is now settled, the question of how the emoluments clause applies is still far from settled, as the potential emoluments are hotels rooms and booking for banquet spaces, not jewelry or horses—and the president’s lawyers have argued there is no comparison and the claims are not serious. Even still, Wednesday does mean the legal headache for the president won’t be going away anytime soon. And, to the delight of his critics, the plaintiffs may now be able to demand that the president turn over highly revealing and possibly embarrassing documents during the discovery process—some of which could reveal the details of how Trump’s hotel business has continued to operate since he took office, how closely he remains in contact with his business, and how much money his companies are earning (or losing).

The judge in the Maryland case, Peter Messitte, agreed with the plaintiffs that the ownership of the convention centers did in fact create a situation where Trump had taken business away from Maryland and D.C. and privately-owned hotels in the region.

“Plaintiffs have plausibly alleged they have been subjected to increased competition as a result of the President’s purported violations. Their allegation is bolstered by explicit statements from certain foreign government officials indicating that they are clearly choosing to stay at the President’s Hotel, because, as one representative of a foreign government has stated, they want him to know ‘I love your new hotel,’ a sentiment the President appears to suggest he likes ‘very much.’,” Messitte wrote, quoting what some diplomats have said they view as a way to get an edge when meeting with the president. The judge also wrote it was “indisputable” that foreign governments have transferred at least some of their business to the Trump hotel at the expense of competing properties.

That fact gives them standing, he determined, though he limited the case to just the competition from Trump’s business in Washington. Maryland and D.C. had attempted to argue that other Trump properties outside of the region also potentially hurt them, an idea that Messitte quickly brushed aside—but, he noted, he only did so because they were potentially hurting businesses in another state. Messitte pointedly wrote he believes other states would have legitimate standing in emoluments cases against Trump if they followed a similar line of legal argumentation.

“This is in no way meant to say that other States or other businesses or individuals immediately affected by the same sort of violations alleged in the case at bar, e.g., a major hotel competitor in Palm Beach (near Mar-a-Lago) or indeed a hotel competitor anywhere in the State of Florida, might not have standing to pursue litigation similar to that which is in process here,” Messitte wrote.