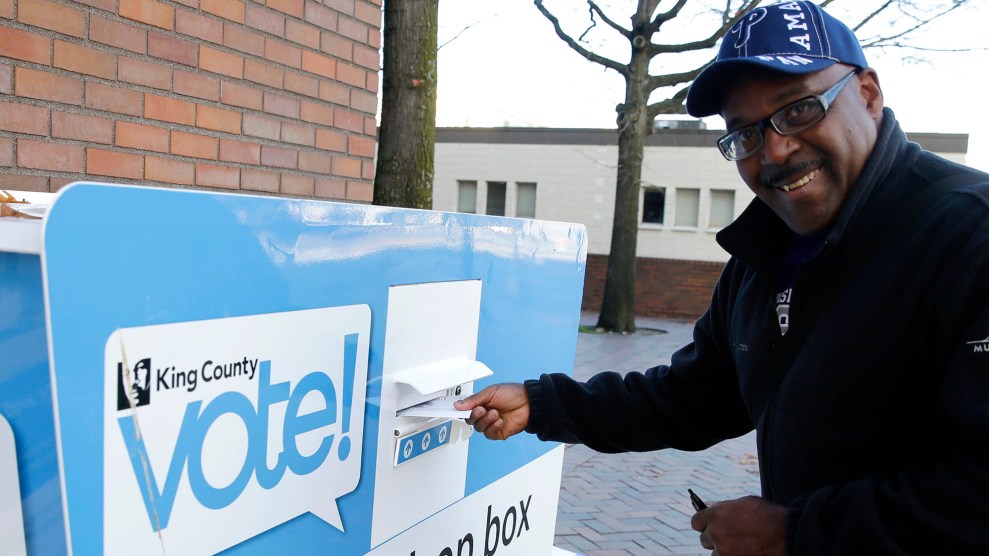 Gus Clark deposits his vote-by-mail ballot in a collection box in Seattle in the 2016 election. Ted S. Warren/AP

Washington Gov. Jay Inslee signed a sweeping election reform package on Monday that will make his state one of the leaders in the country in expanding voting rights. The “Access to Democracy” bills passed by Washington’s Legislature include automatic voter registration, Election Day registration, pre-registration for 16- and 17-year-olds, and a state version of the national Voting Rights Act.

Washington becomes the second state after California to have all four of these policies in place. “We want to have the highest participation rate of anywhere in the country,” says Spencer Olson, communications director for the WA Voting Justice Coalition, a network of groups that lobbied for the bills.

Our government is healthier when more participate. Looking forward to signing these bills to expand access to our democracy. https://t.co/K2l3aORKiR

Washington is the 11th state to pass or implement automatic voter registration since 2015. It works like this: When voters obtain or renew a driver’s license or sign up for the state’s health insurance exchange, they will automatically be registered to vote once the state confirms their US citizenship, unless they opt out. The program will also be expanded to other social service agencies.

Oregon became the first state to implement automatic voter registration in 2016, with impressive results. More than 270,000 new voters were registered that way in 2016, and Oregon had the highest turnout increase of any state in the last presidential election. Registration among voters of color increased by 26 points. Currently, 1.3 million eligible voters in Washington—23 percent of the electorate—are not registered to vote. Voting rights advocates project that 90 percent of eligible voters will be registered under the state’s new system. These new registrants will then receive ballots in the mail under Washington’s vote-by-mail system.

Voters who are not registered automatically will be able to register on Election Day. Studies have shown that the 15 states with Election Day registration have seen voter turnout increase by as much as 10 percent. High school students who are 16 and 17 years old will also be able to pre-register at their schools so they can vote when they turn 18.

Finally, Washington becomes the second state after California to adopt a state Voting Rights Act, intended to boost minority representation at the local level. The law calls for shifting from citywide to district-based local elections. Yakima, Washington, for example, is 45 percent Hispanic, but there were no Latinos on the city council as of 2014, because elections were conducted on a citywide basis and the city’s white majority declined to vote for a Hispanic candidate. But after the city switched to district-based elections following a lawsuit by the ACLU, three Latina city council members were elected for the first time. The Washington Voting Rights Act will make it easier for cities and counties to adopt similar district-based elections, which could boost Latino participation in particular: In the 10 counties with the highest Latino populations in the state, there are no Latino county commissioners.

Washington’s voting reform package highlights a broader national trend of states expanding access to the ballot, in an attempt to combat Republican voter suppression efforts at the national level and in other states. From 2010 to 2017, 23 states passed new voting restrictions. Now, the pendulum is starting to swing in the other direction: Legislators have introduced at least 206 bills to expand access to the ballot in 30 states this year, according to the Brennan Center for Justice.

“Unlike previous years, we’re playing on offense,” says Faiz Shakir, political director of the ACLU, which this year launched a Let People Vote campaign in every state. “We’re seeing a nationwide awakening around voting rights.”

A number of important swing states will vote on ballot initiatives in 2018 that would expand voting rights. The ACLU is currently gathering signatures for a ballot initiative in Michigan that would enact Election Day registration and make it easier to cast an absentee ballot. (Michigan has no early voting.) An initiative to create an independent redistricting commission in the state has already qualified for the 2018 ballot. In Florida, voters will decide whether to restore voting rights to ex-felons, a move that would enfranchise 1.5 million Floridians, including 1 in 5 African Americans who are currently unable to vote. Nevada will vote on an automatic voter registration ballot initiative.

In state legislatures, Hawaii has passed vote by mail, New York is close to passing early voting, and automatic voter registration could soon become law in Utah, Maryland, and New Jersey. The New Jersey Legislature is also considering whether to allow inmates to vote and to restore voting rights to ex-felons on probation or parole.

After a decade of Republican attacks on the franchise, Democrats are starting to take voting rights more seriously, with states paying close attention to what other states are doing. After Inslee announced his intention to sign the voter access bills, Pennsylvania Gov. Tom Wolf tweeted, “Participation in our elections is a key function of democracy. As states around the country take steps to improve voter participation, I’m ready to sign legislation to build on PA’s progress and enact same-day registration, automatic registration, and no-excuse absentee voting.”

This story has been updated to reflect Inslee’s signing of the bills.