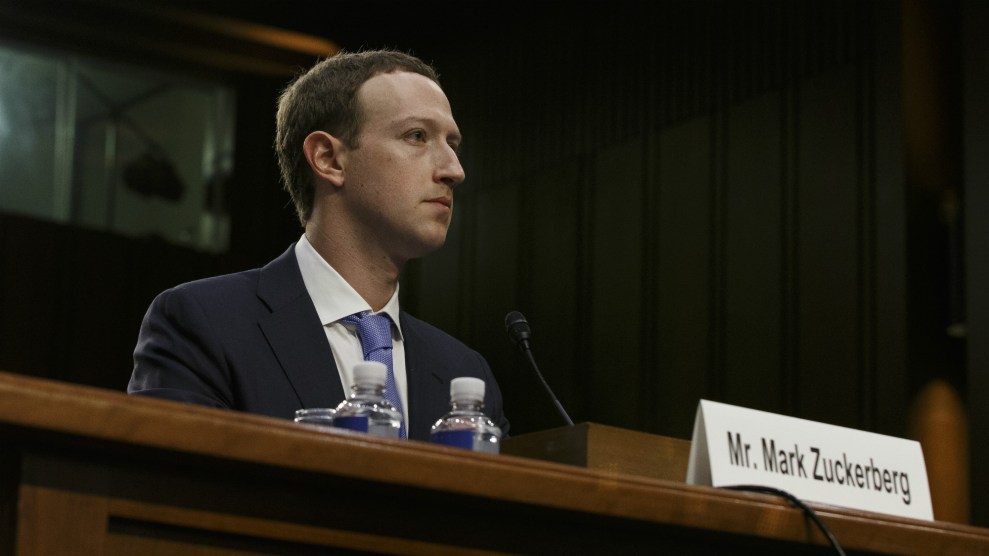 After Mark Zuckerberg told Congress on Tuesday that Facebook had warned the Clinton and Trump campaigns of Russian efforts to hack them, the response was swift—and incredulous. Top officials from both campaigns said that never happened. A day later, Zuckerberg said he’d misspoken. He said his company had in fact reached out to the Democratic and Republican national committees about the attempted intrusions. But this explanation raises a new question: Why would the social media giant contact the DNC and RNC instead of the campaigns themselves?

Zuckerberg’s initial statement about Facebook’s effort to alert the Clinton and Trump campaigns to Russian hacking efforts came during the first of two days of testimony before Congress this week. He said that “one of my greatest regrets” as Facebook’s CEO was not responding more quickly to Russian efforts on his platform to interfere with the 2016 presidential election. “We expected them to do a number of more traditional cyberattacks, which we did identify and notify the campaigns that they were trying to hack into them,” he testified, “but we were slow in identifying the type of new information operations.”

Zuckerberg’s comments led to a public rebuke from Robby Mook, who ran Clinton’s campaign, and Brad Parscale, who headed Trump’s digital operation in 2016. Mook and Parscale, who was recently named Trump’s 2020 campaign manager, insisted that Facebook had not informed them or their teams that Russians had been attempting to hack them on Facebook:

This is not true. We were never notified. I hope Zuckerberg and Facebook correct the record. Now, back to making things work better going forward… https://t.co/Qw9RfyGYPj

Funny to say this, I completely agree with @RobbyMook on this one. I wasn't told about this. @facebook needs to get their stories straight. https://t.co/H7IB4dOQ3y

During the 2016 election, Russian hackers were, of course, successful in stealing thousands of private emails belonging to senior Clinton campaign officials as well as reams of internal emails, documents, and data from the Democratic Party. Russian-backed entities also used Facebook and other social media to spread socially inflammatory false news stories, memes, and other content in an effort to sow division in the United States. But Zuckerberg’s testimony indicates that there were attempts by Russians to directly hack the campaigns on Facebook. A Facebook spokesman confirmed that Zuckerberg was referring to hacking into Facebook accounts or creating fake accounts.

Alex Stamos, the chief security officer at Facebook, responded to Mook and Parscale in a tweet from his personal account. Stamos said that Facebook had contacted the DNC and the RNC to “protect the accounts of key employees and to work together to spot potential additional malicious activity.”

We contacted the DNC and RNC during this time to protect the accounts of key employees and to work together to spot potential additional malicious activity. We also were in contact with the FBI.

During a second day of testimony on Wednesday, Zuckerberg reiterated Stamos’ account, saying that Facebook had notified the DNC and RNC about the Russian cyberattacks, not the Trump and Clinton campaigns themselves.

But why did Facebook contact the party committees and not the campaigns? One former senior Clinton staffer said that alerting the DNC to a cyberattack targeting Hillary Clinton was akin to conflating Netflix with Amazon Web Services, the cloud computing service that hosts Netflix. “I think it’s crazy that they think calling the DNC is the same as calling the campaign,” the official said. A Facebook spokesman did not respond to an email about why the company chose to contact the party committees about the hacking efforts.

If Facebook did alert the DNC to the Russian cyberattacks on its platform, that message apparently never made its way to Clinton headquarters. The former Clinton staffer told Mother Jones that he did not recall receiving such a message from the Democratic committee. “No one at the DNC called us about a conversation with Facebook,” the ex-staffer said in an email. (The DNC did not respond to a request for comment.)

In his testimony before Congress, Zuckerberg said that Facebook had ramped up its internal security efforts to prevent future hacking and disinformation attempts. “We’ve deployed new AI tools that do a better job of identifying fake accounts that maybe be trying to interfere in elections or spread misinformation,” he said. “There are people in Russia whose job it is  to try to exploit our systems and other internet systems and other systems as well. So this is an arm’s race.”