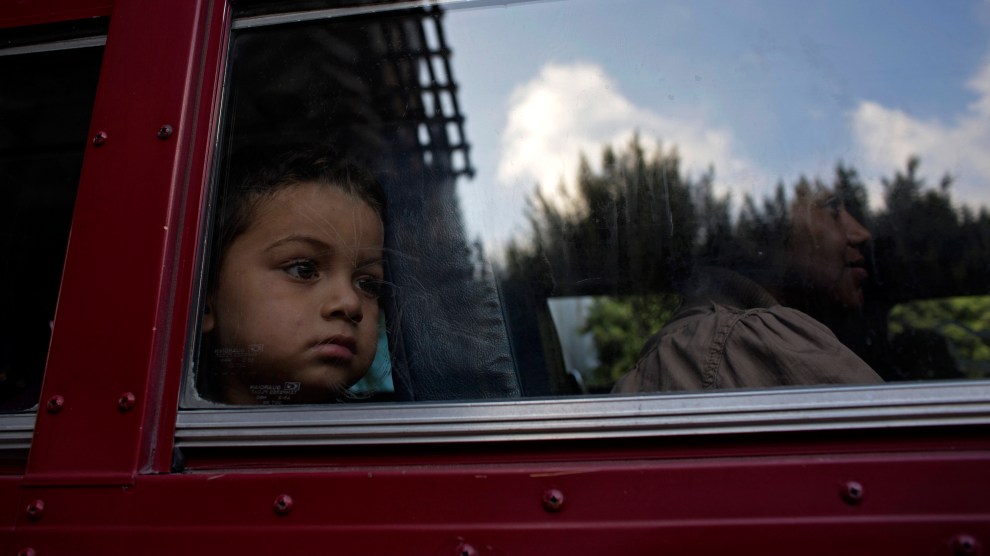 President Donald Trump blamed Democrats this morning for what he called the “horrible law that separates children from there (sic) parents,” a reference to the outcry over his administration’s policy of taking children away from their parents at the border as a means to deter undocumented immigration into the US.

Put pressure on the Democrats to end the horrible law that separates children from there parents once they cross the Border into the U.S. Catch and Release, Lottery and Chain must also go with it and we MUST continue building the WALL! DEMOCRATS ARE PROTECTING MS-13 THUGS.

Trump blames the Democrats for the “horrible law”—and also accuses Democrats of defending members of the violent street gang MS-13 after criticism of his use of the term “animals” in describing them—but his own Attorney General Jeff Sessions confirmed that the policy was part of the administration’s overall strategy in trying to stop undocumented immigration at the US-Mexico border.

“If you are smuggling a child, then we will prosecute you and that child will be separated from you as required by law,” Sessions said during a speech in San Diego on May 7.

Sessions added that Trump was fulfilling one of his central his campaign promises by these aggressive actions.

“Donald Trump ran for office on that idea,” Sessions said. “I believe that is a big reason why he won. He is on fire about this. This entire government knows it.”

The government has denied that this policy is about deterrence, but John Kelly, Trump’s chief of staff and the former Secretary of Homeland Security, told CNN in March of 2017 that he was “considering” the policy “in order to deter more movement along this terribly dangerous network…They will be well cared for as we deal with their parents.” He reiterated the deterrent value of the policy in an interview with NPR in early May, saying that “a big name of the game is deterrence,” and that the “children will be taken care of—put into foster care or whatever.”

Those working within the immigration legal and activism community have seen a “noticeable increase in this practice in the summer,” Katharina Obser, senior policy advisor with the Women’s Refugee Commission,” told NPR in February.

The New York Times reported in April that more than 700 children have been removed from their parents’ custody since October, including more than 100 under the age of four. But at a Senate hearing last month, Steven Wagner, the Acting Assistant Secretary at the Department of Health and Human Services’s Office of Refugee Resettlement (ORR) was “unable to determine with certainty the whereabouts” of 1,475 children between October and December.”

“The new practice of separating children from their parents at the border is just exacerbating an already inefficient system,” Michelle Brané, the director of the Migrant Rights and Justice program at the Women’s Refugee Commission and a leading expert on immigration detention, told Mother Jones. “You’re throwing hundreds—thousands—more children into this system. You’ve actually separated them from a parent and then you give them to ORR, whose job it is to reunify them with a parent. [It] is a colossal waste of money, and is overwhelming our system, and is just plain cruel.”